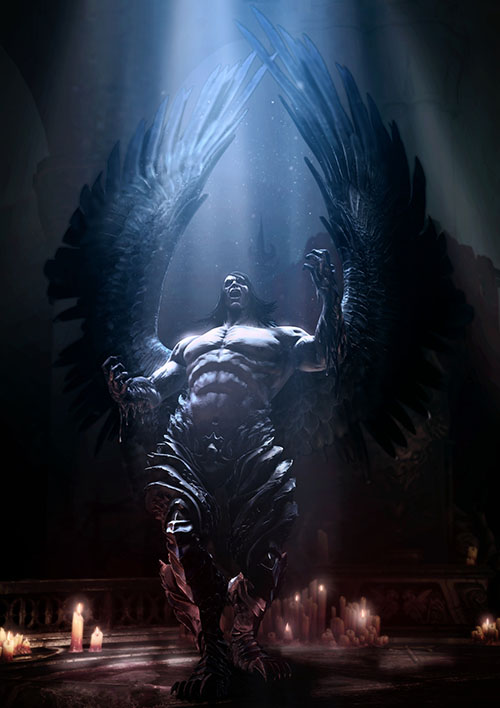 Satan. The Devil. The greatest evil that lurks in the hearts of man. If ever there was an evil to outclass Dracula it would be Satan. That's what makes it so interesting that the Devil himself didn't show up in any of the Castlevania games before the advent of the Lords of Shadow sub-series. Before then he was a character barely mentioned, if spoken about at all.

Oh, sure, there were various demons that appeared in the series, sometimes as a boss, other times as enemies, and they all had various names that have been attributed to Satan. You had your Beezelbubs, your Devils and Demons, denizens of Hell such as Lillith and Adramalech and Lubicant. But in all that time a proper Satan fight never occured. Hell, for most fans the best we saw was Satan's Ring in a few games and Lucifer's Sword in Lament of Innocence.

That's what makes is appearance in Castlevania: Lords of Shadow so surprising. After all this time Satan is finally taking an active interest? The series was really going there? Well, it did, with a storyline that directly tied into Heaven and Hell (as if this were some kind of Diablo games), and at the end of all of it was Satan, the Lord of Hell.

Better late than never, we guess.

Lucifer, aka Satan, wanted to escape Hell, to sever Heaven from Earth and to rule over the mortal plane. The only issue was finding a way top side -- these were actions he couldn't take on his own but would require someone of Earth to perform. All he needed was a stooge to do his bidding and cause the events needed for Satan to rise from Hell.

That stooge was Zobek, or, more specifically, the dark form of Zobek. In life Zobek has been one of the Lords of the Brotherhood of Light, defenders of peace and justice (and all that crap). At a certain point Zobek (and the other two Lords of Light) had done enough good in the world that their souls ascended to heaven. Unfortunately, though, their bodies remained behind to be possessed by evil (a bit of an oversight there, if we're being honest). This dark Zobek, lusting after the power of the other two new Lords of Shadow, desperately wanted some way that he could take it and be the uncontested ruler of Earth.

Searching through Hell, Zobek discovered the Devil Mask, an artifact of great and evil power, that he thought would allow him the power he craved. And it did, kind of -- while the mask have the evil Zobek the power of Satan it also allowed Satan to enter Zobek's mind and control the Lord. Guiding Zobek along, Satan directed him to turn a mortal, Gabriel Belmont, one of the knights of the Brotherhood, to be an unwilling puppet in their dark plans. Gabriel was sent around to kill the various Lords of Shadow, with Zobek guiding Gabriel's hands. With the other Lords dead, Zobek could claim their own artifacts, three pieces of the God Mask that the original Lords of Light had collected. Once all three were assembled, Zobek attacked Gabriel and had the hero near the point of death.

But that's what Satan revealed himself, burning Zobek alive and claiming the Lord's body for his own. Now on Earth, having sowed enough discord and evil, Satan could rule. The only issue was Gabriel who was still alive, was powerful from his time doing the bidding of Zobek, and was pissed. He attacked Satan, dueling the power demon lord. This was a battle Satan thought would be easy but, in fact, Gabriel proved to be just the hero to beat back the Lord of Hell. Satan was defeated, sent packing back to the plane he came from to plot and plan and scheme once more.

In the sequel, Satan has spent the last 1,000 years in Hell, biding his time while his acolytes make the world into a dark and evil place, all to prime the pump once more and let Lucifer reclaim his "rightful" world. Gabriel, though, is also still alive, now a vampire named "Dracula" he has spent the last 500 years asleep, waiting for a time when Satan might rise and the world would need a "hero" to defeat the Lord of Hell. With Satan on the cusp of a return, Dracula is awoken by, of all people, Zobek.

It seems that in the time since Dracula went to sleep, Zobek has slowly been building his own power, waiting for when Satan would return. Fearing the retribution Satan could visit down upon him, Zobek makes a deal with Dracula so the two of them could defeat the acolytes of Satan and stop the Demon Lord's resurrection. Unfortunately not everything goes to plan and, eventually, Satan does rise. After terse exhcnage were Dracula proclaims that he would kill Satan, no matter what, the Lord of Hell elects to take his ball and go home, declaring that, "if I can't rule, no one will."

Satan this summons forth the Leviathan, a hulking beast to destroy the world. Dracula, aided by his vampire son Alucard (it's a long story), flies into the air to best the Leviathan. Once this beast is taken out, Satan takes over Alucard's body, forcing Dracula to choose between killing his son or letting Satan rule. Dracula shows he would willing kill them both if it stopped Satan, Lucifer fled the body, leaving himself open for attack. Dracula the stabbed Satan through the heart, killing the Lord of Hell once and for all, never to return.

The first fight with Satan, in Lords of Shadow, isn't really a fight; it's a long cut-scene interspersed with a couple of Quick Time Events, and then Satan is dead. Kind of a let down for the game, really -- we at the Inverted Dungeon really hate it when games end on a QTE instead of a real battle.

The battle against the Leviathan in Lords of Shadow 2 also isn't really a fight; it's more akin to one of the Titan fights from the first game. You scale parts of the Leviathan, pulls some weak points, then fight a few minions before doing it again. It's a glorified QTE, really, although slightly more interesting than the Satan encounter from the first game, at least.

Finally we have the real fight against Satan... and it's really a fight against Alucard, as Satan has possessed the vampire. Alucard-Satan has a series of powerful moves he can perform, from a quick slash to a dark wave attack and a ground pound. His open attacks are quick, hard to dodge, and very strong. Of course, once you get him halfway down, he'll go into his "limit break" mode. Here he can summon a series of hard to dodge shards of darkness than will slam into the ground. He can also summon a dark tentacle attack that an reach across most of the arena. Really, this fight is just a trying, obnoxious slog, but it is at least fittingly difficult for the final fight of the game.

And it is the last fight of the game, too, because you don't actually fight Satan in his own form. Once you beat Alucard it's just a cut-scene to the end of the game, and then roll credits and you're done. Satan, you deserved better.