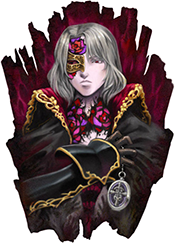 It's interesting how the events of the 2015 Kickstarter campaign for Bloodstained influenced the development of characters. Specifically, when first announced Gebel was the villain of the piece. Once a hero, Gebel was corrupted by the dark magic thrust upon him and became the villain of the piece. All well and good on its own, but then the Kickstarter did well enough to warrant a mini-prequel. Thus we have Curse of the Moon which takes place before the corruption and casts Gebel as a hero.

The character explores the castle, becomes teammates with Zangetsu, Miriam, and Alfred. You gain an appreciation for him as a hero that will make his eventually heel-turn in Ritual of the Night more poignant. It's like the hell-turn Maxim took to motivate the plot of Harmony of Dissonance, except we get to play with the character first. We feel for the villain and what he's been through because we got to bond with him first.

That's good storytelling, and it's all thanks to the Kickstarter campaign working out the way it did.

Once trained as a demon hunter, Gebel was infused with dark magic allowing him to take on the demons more effectively. Unfortunately, in working against the demons he was captured and imprisoned by them. It was only through the actions of three heroes -- Zangetsu, Miriam, and Alfred -- that Gebel was freed from his imprisonment. Vowing to aid them in their quest, Gebel joined the party, allowing them to explore deeper, and more effectively, into the dark domain of the demons.

Ascending the castle of the demon Gremory, Alfred aided his companions with his ability to turn into bats, which granted them access to new areas of the castle that would otherwise be blocked to them. With Gebel's assistance, the heroes quickly fought their way through the castle, eventually leading to the confrontation with the dark demon itself. The battle against Gremory was tough, leading to a fight atop the castle keep itself, In the end the demon was defeated due to the combined strength of the four heroes. 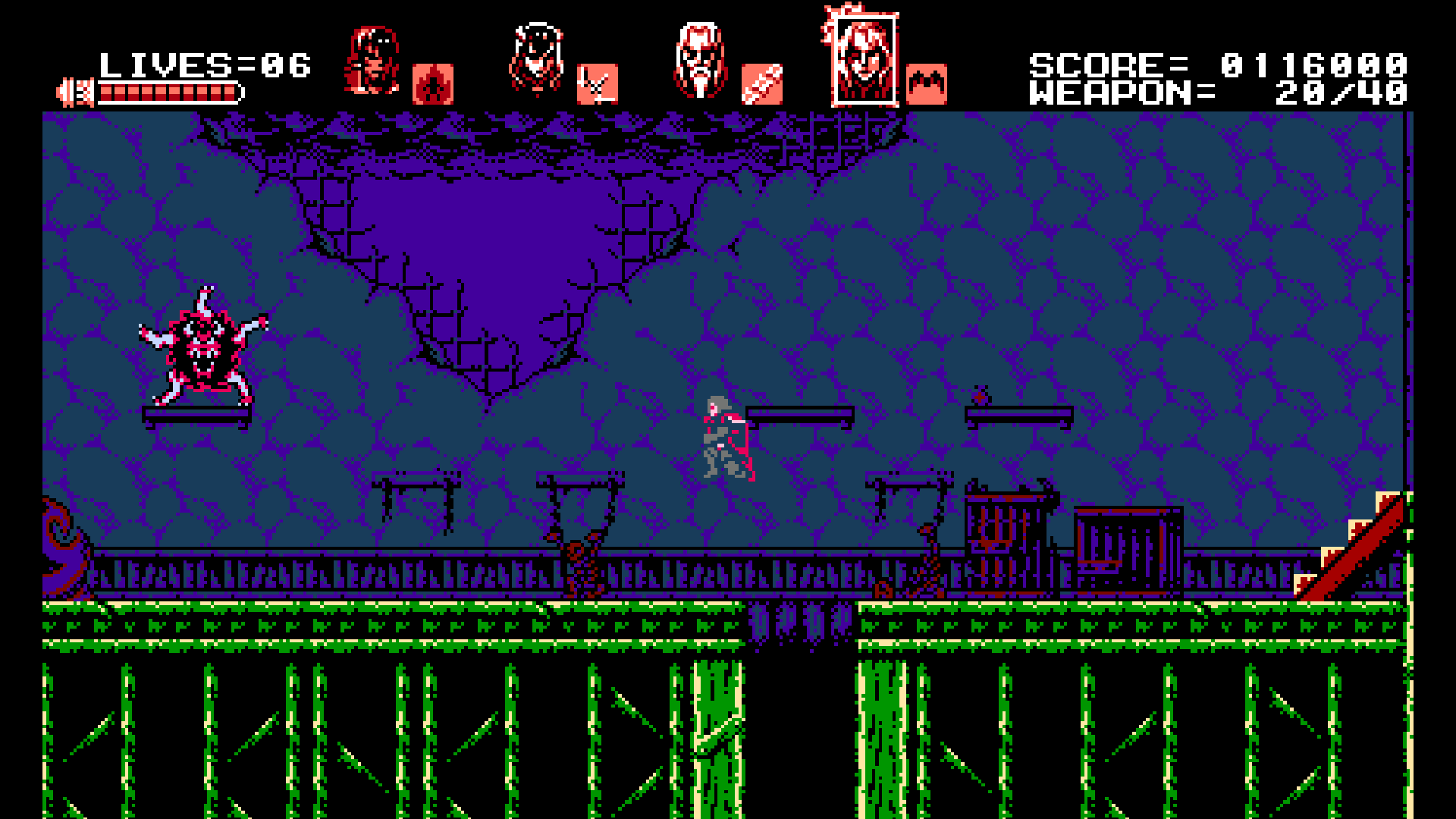 However, dark magic was unleashed with Gremory's defeat. Zangetsu, who had been cursed long ago by demons, was unable to prevent himself from absorbing the magic. He became the new Emperor of Darkness. His party fled, unsure of how to handle this demonic twist.

In the outer castle grounds, Gebel spoke to his resolve to see the evil of the demons ended. He also hoped to see his companion, Zangetsu, freed of the evils of the curse. Joining together once more, the three heroes ventured back into the castle's lands to battle the darkness. Their fight was tougher this time around, the castle more devious, but they eventually ascended the castle, destroying all evil in their path.

Instead of going to the keep, though, the heroes descended into a hell-like plain, finding new challenges crafted for each hero. Separately, they fought through these new puzzles, and together they unlocked the way forward, allowing them to descend one last staircase to Zangetsu's new throne room.

His dark power revealed, Zangetsu used his power to stun Gebel (and Alfred), leaving the hero unable to move while Miriam had to fight the demonic king on her own. However, at times Zangetsu's power waned, freeing Gebel to aid his companion when he could by crafting platforms of bats for her to stand on and gain an height advantage over the traps Zangetsu would drop.

Once Miriam had weakened Zangetsu enough, Gebel was free to aid Miriam in protecting Alfred while the alchemist cast a binding spell. Once read, the incantation sealed away Zangetsu's dark curse, freeing the man. Unfortunately this also led to the heroes death, but as Gebel and his companions left the castle, the were at least assured that his soul was now free and on its way to the afterlife.

While I question how some of the events of these two games, Curse and Ritual, tie together, it all at least makes sense in the case of Gebel. After the events of Curse he's forcibly infused with the demonic shards, turning him into a villain. Sure, he was a hero here, but outside forces made him go bad. Perfectly logical.

As one of the four heroes to venture to Gremory's demon castle, Gebel had been willing to give his life to defend the world. He, along with Alfred and Miriam, returned back to the Alchemists Guild a hero, even if they had lost one of their own, Zangetsu, in the process. Considering how well the shard fusion process had gone so far, granting Gebel power magics to use in his fight, he naturally accepted when they asked to continue their research with him. Unfortunately, what they didn't know was that continue work fusion demon shards into Gebel's body would make him the perfect host for Gremory's dark magic. 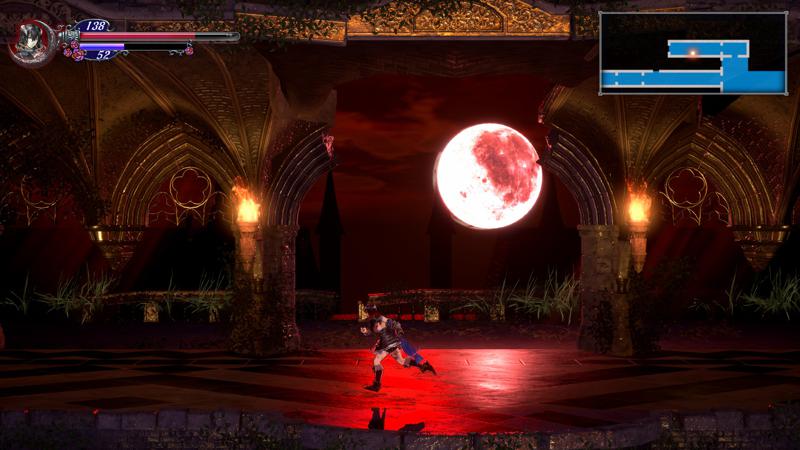 Once enough shards had been fused in, Gebel became the perfect host for Gremory. The shade of the demon visited Gebel, luring him to the side of the evil demons by convincing him that all the Alchemists were evil and had to be destroyed. Gebel attacked, destroying to home of the sorcerers, killing most of them (except for Alfred and his apprentice, Johannes). The only other person left alive was Miriam who, by that point, had been in a coma for ten years after an experiment with her had also gone wrong.

In the attack, Gebel stole a valuable item, the Book of Logaeth. With that tome he was able to summon forth Gremory's castle once more, which he intended to use as his palace. Wouldn't you know it but at the same time Gebel summoned the castle (which was ten years to the day after Miriam fell into her coma), Miriam awoke. Knowing she was the only person that could stop Gebel and save his soul, as she had once made him that exact promise years before, Miriam ventured to the castle with the help of Johannes.

Twice Gebel encounter Miriam as she venture into his castle to stop him. The first was on the ship she used to get to the castle -- he attacked the vessel with demon, hoping to sink the ship before it could arrive. He did not attack Miriam directly then, instead choosing to wait for her to turn away or come find him. Either way he was prepared and, in his mind, the obvious victor in their inevitable confrontation.

Eventually, after scouring the castle at length, Miriam arrived at Gebel's innermost chamber. She had the sword of Zangetsu (which she got from Zangetsu and no one thought it was weird that Zangetsu was back, without comment or back story about how he was alive once more) but she didn't intend to use it on Gebel. Instead, during their fight, she slashed at a red moon that appeared in the sky above the battle. This forced the demon Gremory, who continued to use Gebel as a host, to reveal himself. Unfortunately, freeing the demon from Gebel's body only ensured her friend's death. He was grateful to be free of the demon's power and, as he died, he told Miriam to go find Gremory and end the threat to the planet once and for all.

And she did, but not without a thought about her friend. As dawn fell across the castle, the demons within vanquished, she and Johannes thought about all the people that had given their lives to stop the demons. They questioned if it was all worth it and if, in the end, the demons were really gone at all.

Considering we have a Belmont-type (Miriam) and a Belnades-type (Alfred), it only made sense (especially considering IGA's known love for the character) that we'd have a, Alucard-style character in the game as well. What's amazing is just how much of a clone of Alucard Gebel truly is. Sure, he has a different back story, but the guy essentially looks, and functions, the same way. He can turn into a bat and fly around. He's Alucard!

Okay, so his main attack is different. Gebel really works the bat theme, throwing bats upwards as his primary attack (as opposed to outward balls of destruction). He is, also, not the strongest of the characters -- his bats are pretty weak, and he has a smaller health bar than Miriam or Zangetsu. If one of the other heroes is dead, or you're playing in Nightmare Mode, Gebel works great as a backup. Most of the time, though, you'll likely rely on him for his bat powers, than then play as a different hero for most of the action.

In the Bloodstained series, Gebel was the closest to a vampire seen so far. His powers -- bat transformation and the like -- all resembled abilities seen back the vampires in the Castlevania series. It's fitting, then, that the fight was Gebel fells like a homage to the Dracula battles of old. In the fight, Gebel will move around the room (usually by performing wing smashes at the heroine) before summoning powerful fire and lightning attacks. However, in comparison to most fights in the game, Gebel's battle was actually one of the easiest, making him a simple foe to take down.

That said, the goal of his battle isn't actually to defeat Gebel; if you kill him, it's Game Over. Instead, Miriam has to first fight Zangetsu in the Oriental Mystery Lab and gain the demon hunter's sword. Then, during the fight with Gebel, Miriam has to wait for the moon in the sky to turn red. Then, and only then, can she attack the moon to reveal Gremory and end the fight. Gebel is just a distraction.