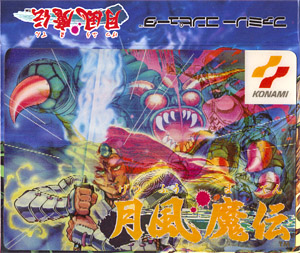 Once, the world was protected by three brothers, great heroes of the Getsu clan, who fought the demons with their powerful Pulse Blades known as the Hadoken. Feared by demon kind, these heroes were the last line of defense preventing the world from being overrun by evil. Unfortunately a powerful demon from the depths of Hell, Ryukotsuki, escaped the underworld and attacked the brothers. All three were defeated, their powerful swords stolen by the demon and hidden away so that no other heroes could rise up to fight the demons as they sought to conquer the world.

Although the youngest, Getsu Fuma, was defeated like his brothers, he was not killed in the battle. The sole survivor, Fuma vowed to venture onto the islands of the demon and fight his way through, retrieving all three of the powerful Pulse Blades. This forced him to run a gauntlet, braving constant demon attacks as he explored the maze-like land. Talking to the few humans left on the islands, Getsu gained access to demon passes that let him venture further, into the strongholds of the demons: Kigan-to (Ogre Head Island), Gokumon-to (Prison Gate Island), and Mitsukubi-to (Three Necks Island).

When all three blades had been retrieved, unlocking the full power of the Getsu clan once more, Fuma then set off for the last island, the final stronghold of the powerful demon lord Ryukotsuki. Demon-killing sword in hand, Getsu bravely battled the evil beast as the two threw everything they had at each other. Eventually, Getsu Fume came out the victor in the long battle between hero and evil, with the demon king dead, his power cast out to the hells it came from.

Evil defeated, the world returned to peace, with the powerful Getsu Fuma its protector once more. The demons were sent to Hell and the Getsu clan had a new leader to usher them through the new Demon Age.

When it was released, Konami was in a very experimental stage with their games (unlike now where they play it safe, generally sticking to the mobile market and gambling machines). Titles like Castlevania II: Simon's Quest, Konami Wai Wai World, and The Goonies found the game developer tinkering with what kinds of game play to include in their platforming titles (crafting a whole swath of early Metroidvania games). Getsu Fuma Den fits neatly into that era of development for the company.

While the game play is similar in style to those other Konami efforts, there's a clear reason why Getsu Fuma Den never made it to the West: its blend of Japanese mythology and storytelling would have been a hard fit for Western audiences to understand. That's especially the case for the translation of the title, which would have needed extensive work (and likely a fair bit of "Americanization") to make the title into something audiences outside of Japan would have cared about.

It is a bit of tragedy that, even now, the game has never been officially released in the West (sticking solely to the Japanese Virtual Consoles any time its re-released) as the game is a strange, interesting blend of play styles and concepts. Heck, it might have been a little too weird even for Japanese audiences as the game never had an official sequel (although it's main character did go on to cameo in other games, like the Wai Wai World titles). Perhaps this blend of ideas was just a little too out there even in the game's homeland.