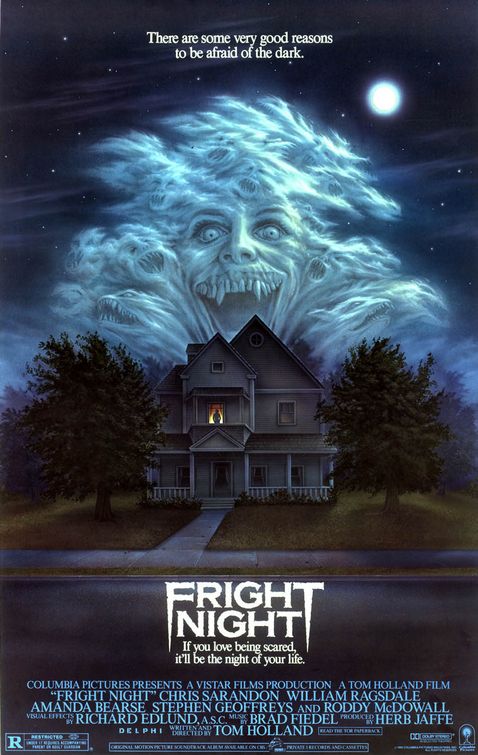 Charley Brewster (William Ragsdale) is a normal high school guy. He's got a girlfriend, Amy (Amanda Bearse), he's failing trigonometry, and he has a vampire living next door. Okay, so that last part is new, and not normal. See, the house next door had been empty for years until one day, suddenly, it was sold. In moved Jerry Dandrige (Chris Sarandon), a cool and suave 80s power-player. When Charley wakes up late one night and looks across the way to Jerry's pad, he sees Jer and a young woman about to get frisky. And then Jerry grows fangs and leans down to bite her neck. Charley sees it, and Jerry sees that Charley sees it.

That's when the horrors start for Charley as Jerry begins playing mind games with him, coming after those he loves most. It's up to Charley, and an old horror movie actor named Peter Vincent (Roddy McDowall) to stop Jerry before he kills Charley... and everyone else.

I remember enjoying Fright Night when I was younger. It's an interesting concept, the classic neighborhood being intruded upon by a creature from beyond the grave, and back when it came out there weren't a lot of movies that explored similar ground. Of course, since then we've had all kinds of stories like it, from Monster Squad to It, not to mention a more-modern version of the film with the 2011 Fright Night remake (which I really enjoy). Would the 1985 original be able to hold up. 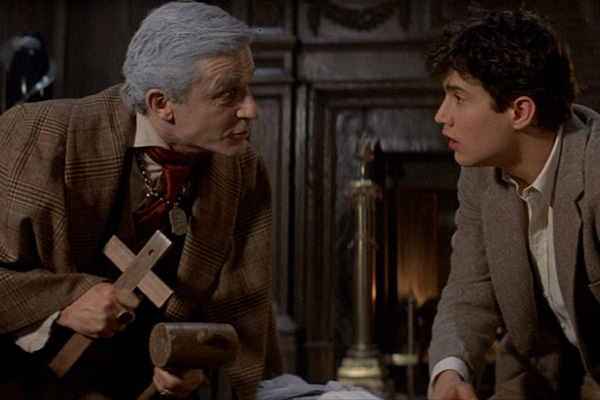 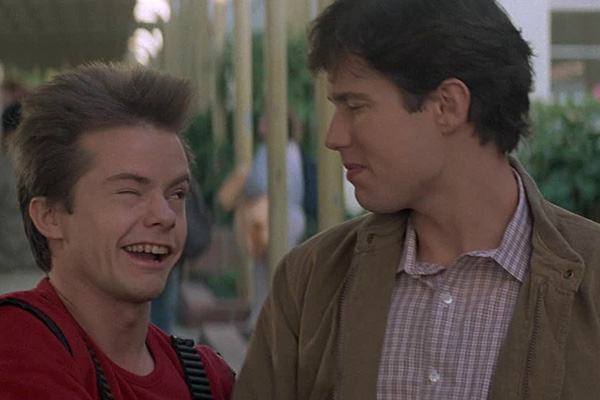 Admittedly, the movie is slow to start. Charley isn't that great a character at the beginning, kind of whiny and dumb. Plus, really, he's a jerk to his girlfriend, pressuring her to do things she doesn't want to do and then ignoring her afterwards. I know the movie is just supposed to be playing him as an "average" teen male, but the early scenes have not aged well in the last 30-plus years. Thankfully, after some bad characterization, and a few awkward scenes, the film eventually kicks into gear. Jerry really ignites the whole plot line and the further the film dives into the the storyline the better the movie gets -- less awkward PSA and more actual horror movie.

Of course, a lot of that is down to how great Chris Sarandon is in this role. He commands the scenes as Jerry, giving the vampire real menace along with charisma. Let it never be undersold how important a good vampire is in a movie like this, and Chris Sarandon ruled this part. No matter how annoying Charley and Amy might get during the proceedings, Jerry is a force to carry the movie.

Less impressive was Roddy McDowall's Peter Vincent, although that's not really the fault of the actor. Peter just isn't that interesting a character as written and while Roddy gave it his all to drive a spark through the character, he was still working with half a deck, effectively, when it came to material from the script. Plus, let's be honest, David Tennant is a fantastic actor and his version of Peter Vincent from the remake is just a better character all around. I like Roddy McDowall, but David Tennant owned the role.

While the characters may not all be great (aside from Jerry), the movie still has plenty to excite the masses. There is a ton of gore in this movie, especially in the last act, with blood and viscera pooling and splashing around. This, coupled with the lovely practical effects, really adds a tactile feel the film. The gore is so much more disgusting before it's real. 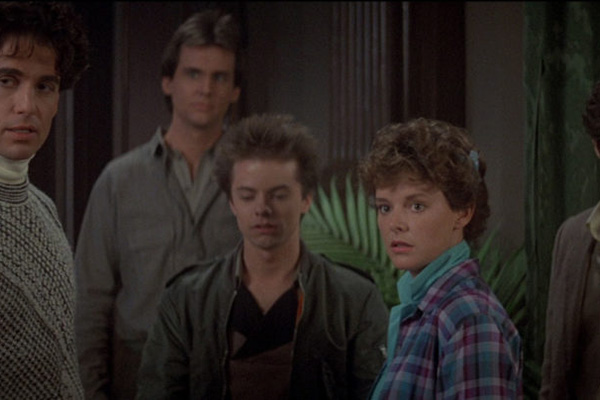 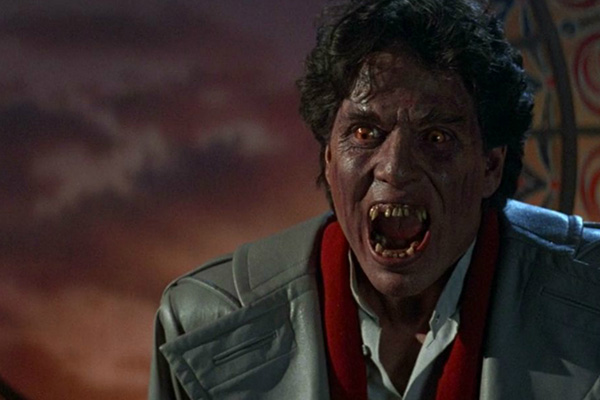 The real MVP of the movie, though, is the soundtrack. It's so very much a product of the 80s, with a number of licensed tracks for the film that were obviously engineered to be pop hits. But even the score has a great vibe to it, with hard guitar licks and serious 80s synths. It's a product of its era, but it really works. This is especially in the horror scenes where the music builds and amplifies the creepiness, the guitar wailing in the background. It's so good.

On it's own, the 1985 Fright Night really gets good once it's done establishing its setting. The first act is slow, but if you can bear through it there's a great little horror movie here. I do like the remake better, but the original has it's own charms that should not be ignored.