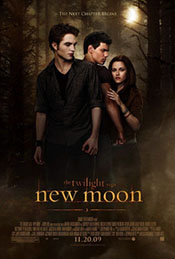 Bella and Edward are in love. They swoon for each other, are dedicated to each other, and want to spend every second with each other. For a relationship that's only been going on for a few months, these two are scary-committed to each other. Sadly for these two young lovers, Bella is mortal while Edward is a centuries-old vampire. Her fragility is his fear (or something).

Attending a party at the Cullen house (which is entirely made up of vampires), Bella is injured. As blood trickles out of her wound, one of Edward's family members freaks out and tries to attack Bella. The vampire is fought off, but suddenly the bloom is off the rose for the relationship. Fearing what would happen to Bella if she were to stay in the presence of his family, Edward breaks it off with the girl. He leaves town, his family leaves town, and Bella is once more alone. So she mopes, and pines, and basically is useless for months on end. But then, her old friend Jacob starts hanging around, pulling her out of her shell. Can he perk up Bella and bring out the lovely girl within her, or is there more (on both sides) of this budding relationship than meets the eye?

I meant to review this movie months ago. I have a policy of re-watching movies when I've been away from them for too long -- I want them to be fresh in my memory so I can hate-write all the terrible details while I remember them. However, the thought of going back and re-watching Twilight 2: The One with More Mopes grated on me so. I just couldn't do it. Not that I've forgotten much, but I felt it needed to be stated that despite all the terrible movies I will watch and re-watch for this site, I will never watch New Moon again. I hated it that much.

Let's begin with the two lead characters, Bella and Edward, although Bella isn't really a character in this movie. She's just kind of there, reacting to things as they happen, but she's so cold, distant, and basically dead throughout the movie that you can't call her a "character". While I like Kristen Stewart in other movies, this role could have just as easily been played by a cardboard cutout and Bella wouldn't have been any less interesting than she is here. It's a fault of the scripts (which, I assume, means it's a fault of the books -- books I will never read), but Bella is gives so little to do here that you have to wonder why she was even included. And the thing is: she's in every damn scene. She's the primary lead of this whole movie and she's just a giant sucking void that the rest of the movie rotates around. She adds nothing, does nothing, and ends up back where she started by the time the credits roll. 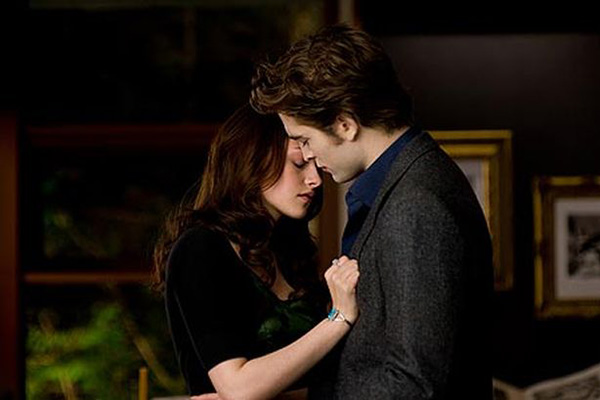 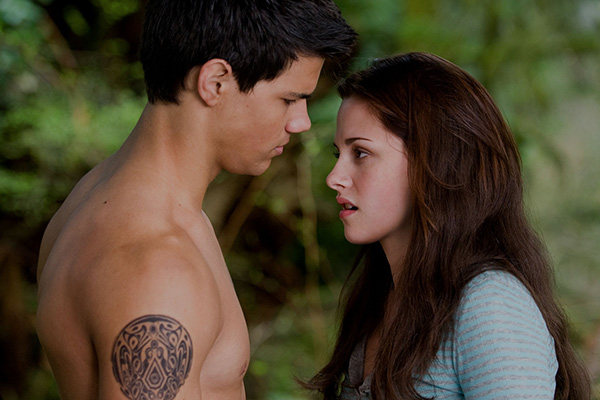 Edward comes across even worse, though. His motivation for leaving is because he wants to keep Bella safe. He tells her to move on, to forget about him, and to find a new path in life. Great so far, Ed. But then he keep showing up as visions of her. It's implied that he's keeping an eye on her remotely, purposefully making she she'll be okay. But Bella is clearly not okay at any point in this movie. She's haunted by visions of her ex-boyfriend which only leads her to be even more clinically depressed than she was before. But it's for her own good, right, Ed? He's both an insensitive, distant jerk and a, overly affectionate, creepy stalker at the same. It's an impressive trick of writing the movie (and, again, presumably book) pull off, but I'm sure in both case they meant for it to be endearing, to show how much he loves her. He doesn't love her. He just wants to possess her and play with his food before he inevitably kills her in a stupid, stupid way.

Okay, to be fair there is a third major character: Jacob. He's Bella friend, had a small part in the first movie, and he shows some genuine chemistry for Bella. I can understand why there are people that wanted to see Bella end up with Jacob -- he's written with real, human emotion and genuinely seems to care about Bella. So, obviously, she has to reject him repeatedly so she can continue pining for her vampire lover that unceremoniously ditched her but won't actually leave her alone. The relationships in this movie are all toxic and yet, somehow, this is supposed to be high romance.

Nothing really happens in this movie. Ever. When Bella isn't walking around and moping she's sitting around and moping. There's literally a scene of her, in a chair, for several months, as time just ticks by, with her in a permanent mope. She's clearly not going anywhere this whole time as, when she finally shows back up at school, everyone is surprised to see her. And then she does something stupid, Edward thinks she's dead, and the movie resolves itself in fifteen minutes. Everything in the movie could have been condensed to a prologue for the third movie (or abandoned entirely) and nothing would have been lost. All that can be said is that Jacob doesn't get the girl because Edward never really dumped her permanently. We just end up back with Bella and Edward so in love with each other that despite only just getting back together, the two are scary-committed to each other.

This movie wasn't fun to watch. It wasn't even fun to hate-watch. The times I wasn't bored by the lack of action I was made angry by the stupid, petty things these characters did to each other. And there's another three of these movies I have to suffer through. Do yourself a favor and skip these movies at all cost -- only one of us has to suffer at this point.