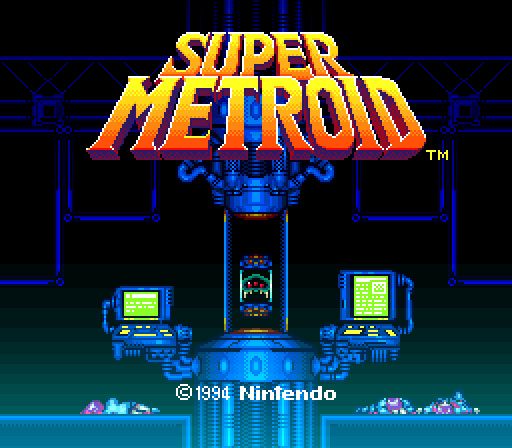 Where the original Metroid is a formative game for the Metroid series, 1994's Super Metroid (titled Supa Metoroido in Japan) is a formative game for the whole of the Metroidvania genre. By that I mean that you can't have Super Metroid without the first game in the series and the groundwork it laid out, but without Super Metroid, and the way this game evolved the whole concept of the exploration/platforming adventure, then you wouldn't have any of the other games that built on it in the future. This is the key stone, the linchpin to the whole genre, and without it games like the entire back half of the Castlevania series simply wouldn't exist.

For a Metroid fan, this third entry in the series took what people expected and perfected it, and adding in everything gamers didn't even know they wanted. This wasn't just an evolution of the form, like Metroid II: Return of Samus; Super Metroid felt revolutionary. It wasn't just the graphics, or the sound, or the improved mapping system (or any mapping system), or all the new abilities, but the way the game combined all of it together in a non-linear package, answering all the complaints about the previous two games with such style an aplomb that, it's fair to say, the series really starts for a lot of fans with here, with this title.

Not that Super Metroid ignores what came before. The story for the game is a direct sequel to the previous two titles, opening with Ridley, ever the antagonist of series heroine Samus Aran, kidnapping the baby metroid she's saved at the end of the second game. Samus is then informed that the Space Pirates have been detected once again operating out of Zebes, their old home world, and it's up to Samus to go back to the setting of the first game and tackle this evolved world that seems familiar but features so many new locations to explore.

In story Super Metroid respects the history of the series, putting in little nods to the first game while reusing power-ups from the second. In design, though, Super Metroid saw what came before and decided to forge a new path. The producers clearly knew they had more they could do with the hardware and weren't comfortable just making another basic title in the series. The hardware, and the control, unlocked a ton of potential for the heroine, so they let her pick up new moves, new abilities, and new controls, all to make her more lithe, more energetic, and more powerful.

When you first boot up the game you've find yourself controlling Samus as she descends into the space base where the Baby Metroid is kept in captivity. Even in this opening section you get a sense of how much more control you have over the heroine, and you get a chance to appreciate the improved visuals and great aesthetic for the game. Super Metroid, put simply, is a beauty to behold. If you like your adventure games full of dark, dank, oppressive sci-fi aesthetics, Super Metroid has it in spades. Despite being an early title on the SNES, the third game in the series featured visuals that held up not only to the end of the Super Nintendo's lifespan, but still hold up today.

Visuals aren't enough, of course. With Super Metroid, Nintendo improved the game play of the series as well. As Metroid II: Return of Samus achieved before, Nintendo was able to show that Samus could have new powers and new abilities (tucked away in some of the most obnoxious to find places), and instead of diluting the game play, they'd enhance it. While this game ditched the wall-crawling Spider Ball from the second game, it did add in more power-ups, improving the overall experience. Speed Booster, Grapple Beam, X-Ray Scope, Super Missiles, Power Bombs -- these power-ups don't just act as gateways to new areas but also give you more options for how you explore, never holding your hand but simply giving you a hint about what you can do.

Arguably, more than even the previous two games in the series, Super Metroid allowed for truly non-linear exploration. Just watch any speed-run of the game to see all the multitude of ways to navigate the game, with so many routes through Zebes that Samus can take to reach the end of the game. SO much of the world is optional, if you know what you're doing, and part of the joy of the game is exploration, finding your own way whether it's the one the designers intended or not. Arguably, with all the options and bonus powers Samus can get (not all of which are even explained to you by the game in any way), every route and alternate path was probably intended by the designers, everything an expected behavior simply because they wanted the game to be as open as possible.

Arguably the only essential power-ups are the Morph Ball, Ice Beam, and a few Missiles, Super Missiles, and Power Bombs. Once you've collected those, where you go and what you do are entirely open to you, all without having to perform game-breaking glitches to do it. The Zebes of the game is a wide-open maze, a dream for any Metroid fan to play through. Naturally, it can be an intimidating place to explore the first time you land Samus's ship on the planet, but then that's no different from the first title in the series. It's just you and a planet to conquer and very rarely does the game ever let you in on its secrets; if you want to unlock your full potential you have to do it on your own terms.

Make no mistake, Super Metroid is a challenging game, although maybe not in the same ways (or as starkly challenging) as the original title. This game tries to be a little more inviting, both in design aesthetics and in game play, with enough nods towards newer players so that they can try to figure out the planet without it feeling like an immovable wall. That means the save stations and ammo stations make a return from the Game Boy title, and they're now joined by a very friendly in-game map. While the map won't tell you everything you need to know, just having it (so you don't have to draw a map yourself or go off memory) is a real life saver.

Despite these additions to make the game a little more "accessible", though, this is still a game that even the hardcore fans like. A lot of that is due to all the special, hidden moves you can do once you unlock certain power-ups. The first time you perform a "shinespark" and launch Samus hurtling across a room opens your eyes to sudden new potential. And then you start wondering where else you can do it and if there are any intended places where the designers want you to hurl yourself at high speeds. Or there's the X-Factor, special Charge Beam plus Power Bomb combos that deal a ton of damage and can be very effective against bosses. You don't learn about these things in the game but once you accidentally pull one off you're sudden firing off ways to use it elsewhere.

That's so much of what makes this game special: the care and design of the title with the trust that the players can figure it all out for themselves. Experimentation is a necessity in Super Metroid and it's what keeps players coming back, over and over, after all these years. It's tis combination of care and experimentation that the best Metroidvania titles aspire to, and those that succeed are held up against Super Metroid as worthy successors. Few achieve that honor, but those that do live in the pantheon of the best of the best for the genre.

After Super Metroid, the series went in a few different directions. It would take eight years for Nintendo to release follow-ups, but in 2002 we were graced with two different ones. Metroid Fusion was a side-scrolling game and direct sequel to Super Metroid. While more of a linear adventure than this third title in the series, it is still held up as a marvel of the Game Boy Advance and a worthy sequel. Maybe not as beloved as Super Metroid, Fusion does have its fans and is regularly run by casual players and speed-runners alike even today.

Meanwhile, Metroid Fusion acted as a prequel to most of the series (taking place after the first Metroid but before all the rest). A 3D interpretation of the series, this game still put the focus on exploration while adding in some of the run-and-gun mechanics of the shooter genre. Prime that showed that the Metroidvania formula could be adapted outside the cozy confines of 2D space. It's a solid title that launched is own sub-series within the Metroid continuity.

And, of course, the spirit of Super Metroid lives on in every game to come out in the series after this. They're all compared to this third title, borrowing mechanics and play style from the adventure, the undisputed high point of the series.