Due to the evolution of the Metroidvania series we have seen a number of crossover titles that take elements of Castlevania and Metroid to craft a new game. The titles clearly borrow heavily in one direction or the other, and while their finished works may be new games not beholden to either title in their final form, there's still a clear connective tissue between those games and the Metroidvania genre as a whole.

1991's Actraiser (titled Akutoreiza, which is a phonetic Japanese spelling of "Actraiser") is a different beats altogether. Developed by Quintet, this weird little title smashes the concepts of the platform action genre (codified in large part by the Castlevania series) into the sim genre, creating something different and very interesting in its own right. It's like if, as the mayor of a town in SimCity you occasionally had to interrupt your main task to then fight disasters on the overworld and, between zoning blocks, you had to then descend physically into a dungeon to fight monsters. No matter how you look at it, it's weird.

In the game you play as "The Master" (aka God in Japan), an immortal being who looks over and protects his people. Hundreds of years ago the Master got into a battle with the evil one, Tanzra (aka Satan), for the fate of humanity. The Master was grievously injured and escaped to his floating temple in the sky where he slept for hundreds of years while Tanzra slowly turned the world down the path of evil. Now, after all that time, the Master is away and looking to save his people once more.

To do this you control the floating palace, hovering over the world. You can move to any town and beam down to the town. If you haven't already cleared the first wave of monsters, the Master first has to go down himself (beaming into a statue of himself) and battle the monsters that patrol the territory (in side-scrolling action). Once this territory is cleared, the simulation part of the game begins, with God sending out his cherubic angel to watch over people and defend their town from demons while the Master directs where the people should build. Demons are fought, demon caves are sealed, and items are discovered and collected. 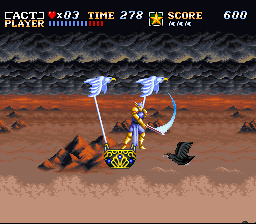 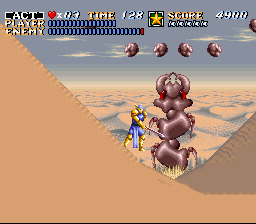 In its own way, Actraiser has elements not only of Castlevania and (to a lesser extent) SimCity, but also bits of Metroidvania and RPG games as well. As towns grow, the populations will expand and, once the Master has enough followers, he'll level up, gaining more health (the people being experience points for their god, essentially). While they explore and expand their towns they'll find items that can be used not only in the platforming sections of the game, but also to aid other towns -- one town will learn out to grow wheat so you can feed other villages, another will learn music so you can soothe another town that's become angry and stops believing in you. There's a lot to do in the game that goes beyond hack and slash.

That said, if hack and slash is your thing, there is an unlockable "Professional Mode" that gives you a harder adventure to play through, on stripped of all the simulation aspects of the game. In this form the game most resembles Castlevania and its brethren, a pure action platformer focused slowly on the Master killing monsters. It doesn't have the zest of the main mode of the game, but it does provide some high quality action if that that's what you really want.

In fact, this focus on action in the Professional Mode would eventually lead to the creation of the game's only sequel, Actraiser 2, which also was a pure action game without any of the simulation aspects included. Thing is, the simulation part of the game is what made it so special; the platforming action was good, mind you, but we already have plenty of those kinds of games in existence. But a weird and quirky little action game with simulation aspects really stood out at the time on the SNES and, frankly, still feels special all these years later.

There hasn't been another game quite like Actraiser (not even its sequel), which is a huge disappointment to fans of this title. Quintet would go on to create many other weird, wild, crossover games (Robotrek, Illusion of Gaia, SoulBlazer, Terranigma), each of them special and unique, but the magic of this game, specific to this game, was never recaptured in any other title.

Like with Castlevania, Actraiser features very strict level construction, linear stages (broken into two "acts", thus its name) capped by a boss fight at the end. The hero has to travel through the stages, using their weapon (and various sub-weapon-like spells) to clear the bad guys out of the stages before eventually making it to the boss for the final confrontation. There are six main acts in total, not unlike the six stages of the original Castlevania), with plenty to fight and kill within.

Looking at the graphics of the game, it does seem like Quintet was inspired by Konami's original series. We have a dude drawn in a manner similar to the Konami house style, armed with a singular weapon and dressed in a kilt (the better to keep his legs free). As he travels he's greeted by a lot of fantasy and Gothically-styled settings and a rousing soundtrack to back it. In its own way Actraiser feels like a parallel to Konami's own Super Castlevania IV, two games that tried to push what the SNES could do not only in game play but also in sound and style.

In fact, the same argument about Super Castlevania IV, that it was as much a tech-demo for the system as it was a game, could be leveled at Actraiser too. This game, with its weird dual-action style, and liberal use of Mode 7, feels like Quintet exploring everything the SNES could do, and then finding a weird path to do it all. But, you know, with a dude who swings a powerful weapon. Every game needs a core to it, and Actraiser comes at the Castlevania sandbox a little from the side but still gets there in the end.