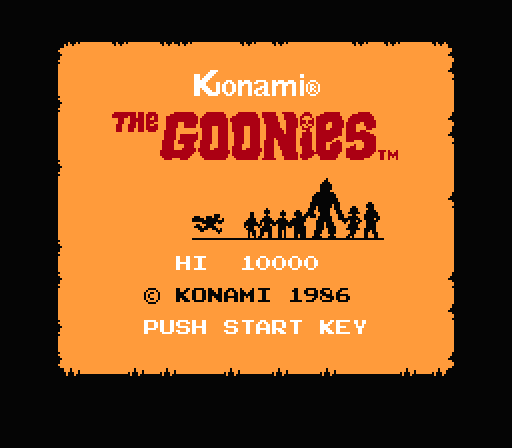 I think at this point we can safely say that Konami had a house style. When it came to their platformers (especially when you take into account their releases in Japan), the company had a deep love affair with the Metroidvania genre. They did contribute the series that became one half of the sub-genre's title: the "vania" of Metroidvania. With all the games they made exploring the genre, Konami was as big an influence on the category of games as Nintendo and their Metroid series.

When looking at an overview of Konami's output, the first of their two Goonies titles marks one of the company's earliest forays into the genre. While not a true Metroidvania title, it bears many of the basic hallmarks, show where Konami's ambitions lie and where these kinds of games would be going with just a little more refinement. The Goonies is very much a "proto-Metroidvania"; not quite there but so close Konami could almost taste it.

The Goonies (titled Gunizu, a phonetic Japanese spelling of "Goonies") acts as a sequel of sorts to the 1985 film where you play as Sloth (although he looks a bit like the hero of the next game, Mikey) on his own mission. The Fratellis (villains of the film) have kidnapped the various kids from the film and so our hero has to go through the stages of the game, collecting three keys to unlock the exit to the next stage. Along they way they're also encouraged to collect the kidnapped Goonies in each level (failure to do so will keep the last level of the game locked away, putting the hero back at the beginning of the game to do it all again).

To complete his mission and save the Goonies, Sloth has to platform his way through the stages, killing rats to collect bombs (for reasons that only make sense in a video game) all so he can blow open locked areas and find treasures, items, and Goonies. He can stun the Fratellis (but not kill them) all while avoid traps and instant death pits. It's a classic feeling adventure, with Konami's regular spit and polish, all brought together as only Konami could, making it a very solid title that, sadly, never officially came to home consoles in the West (although it did appear, without any seeming changes, on the "Nintendo Vs." arcade system in the U.S.). 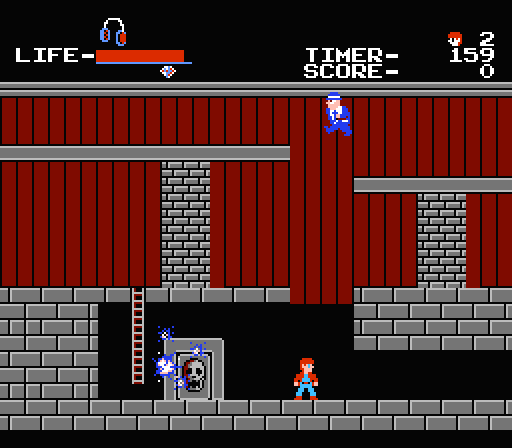 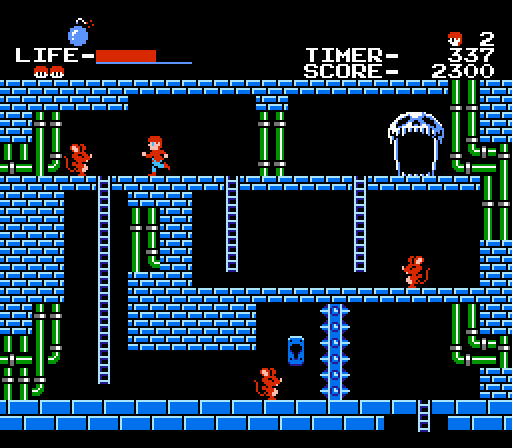 While that all sounds pretty basic, what really brings this game into the Metroidvania genre, showing it as a formative work, is in the items system. Hidden throughout the game are special items that Sloth can collect and keep permanent, upgrades that protect him from all kinds of dangers, like headphones to block sonic attacks, and a fire suit to prevent damage from fire jets. None of these items are specifically required but failure to collect them does make the game progressively harder as you continue on. It's best, then, to spend time searching for and collecting every item you can for added protection.

That said, finding these items doesn't work like it would in a proper Metroidvania. The items appear when Sloth walks over certain tiles and pauses (or, in the game's 2nd quest, performs a specific action at a specific location). There's no boss fight to guard it and no indication of what's so special about what you just got. The items don't gate any progress, they just make the game easier, so the game relies heavily on experimentation and your own knowledge of the game to explain what's going on with the items.

Still, overall this game shows the way the genre was coming together. It's a solid platformer with the first hints of grander ambitions. What's most interesting, beyond what the game does, is the fact that Konami put this level of care and effort into a licensed title. This wasn't an IP they owned, just one they paid for, and they made no one but two Metroidvania titles from the Goonies IP that would stand the test of time among fans of the genre. Of course, the second game would invest even more deeply in the trappings of the Metroidvania style.

Konami made Metroidvania games, even before that genre had a title. They certainly contributed more games to the genre than Nintendo did, it's just a pity that most of them, this first Goonies game included, never saw the light of day in the West. Games like The Goonies would have done a lot to show Western audiences that a title like Castlevania II: Simon's Quest wasn't just a weird one-off game but a concerted effort by the company to expand the genre. 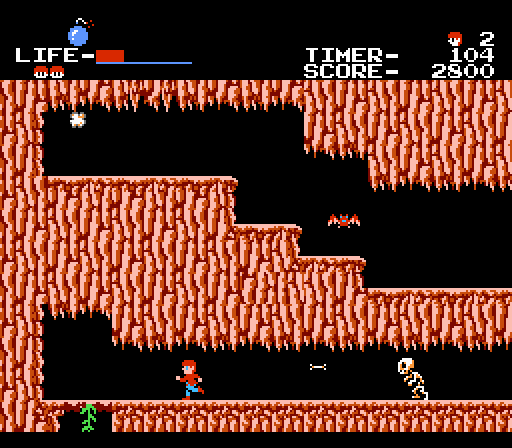 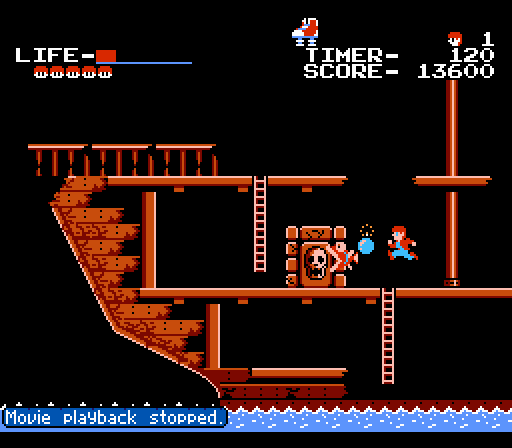 As for direct connections between The Goonies and Castlevania we need look no further than Vampire Killer, the MSX inspired-remake of Castlevania that blended in Metroidvania ideas. Putting The Goonies next to Vampire Killer, the two feel off a piece: the still rigid level structure, the items hidden in plain sight if only you knew how to look for them, and all the keys. So many keys.

Considering when the two games came out, it's pretty clear that The Goonies informed Konami's work on Vampire Killer, giving the developers inspiration on how to take the Castlevania style and expand it with a touch of explorational ambition. Of course, because of these games we then got Castlevania II, which really went hog-wild with the Metroidvania ambitions.