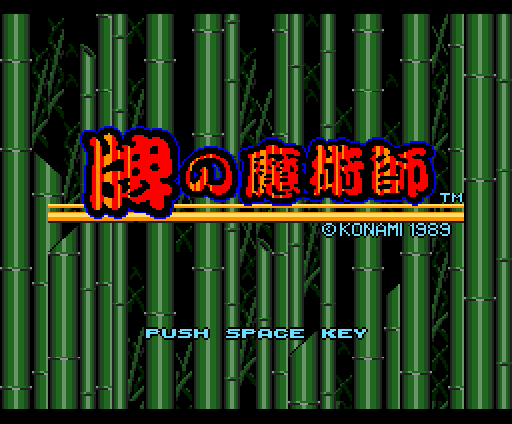 Konami has not been above using their mascot characters to sell other, unrelated titles. We've already discussed previously the platforming adventure titles of Konami Wai Wai World and Wai Wai World 2: SOS! Parsley Castle, two games that have a much more direct correlation to the Castlevania series, but these weren't the only titles to crossover Castlevania with other games. Over the years, Konami has shoved their various mascots into anything that even seemed the teensiest bit plausible.

That's how we get Hai no Majutsushi, a mascot-branded version of Mahjong's. For those of us in the West, the Mahjong's. we probably know isn't the one that's commonly played back in Japan. Although ours is often called "Mahjong's." what we're actually playing, generally, is Shanghai, a puzzle game that uses the the Mahjong's. tiles for a very different, non-traditional experience. Classic Mahjong's. is a gambling game where four players will sit around a table, each getting one quarter of the set of tiles. They'll play these tiles out, one at a time, round-robin, in an attempt to make points via combinations, a la Rummy.

Admittedly, for someone that doesn't understand Japanese, that might be as far as you get with Hai no Majutsushi as this is a Japan-only title never released in the West. Thus, if you try to play the game you'll have to be able to ready the Japanese menus (or just stumble your way through). And you probably will want to have a basic understanding of the game ahead of time as this title won't hold your hand (unless, of course, you can read Japanese). It's a pretty no-frills game, frankly, that wouldn't be special or worth mentioning on this site were it not for the fact that the characters the players play against are mascots from various Konami franchises, Simon Belmont included.

If you do understand the classic game of Mahjong's. and want to stumble your way through this game, Hai no Majutsushi seems like a pretty standard Mahjong experience. It's exactly what you'd expect from that description and nothing more. Even the inclusion of mascot characters is just a coat of paint as they don't really do anything in the game except play Mahjong. It's pretty obvious, then, why this game never made its way overseas.

For an inexperienced player, such as myself, there really isn't much to keep you going with the title. The game can seem obtuse and hard to parse for outsiders, with players laying tiles seemingly at random, and then eventually some player calling out their win (I imagine them shouting "Rummy!" even though I know they aren't) before the points are totaled. As should be expected, I failed to get far in this game and lost the few times I tried to play it. This version of the game just isn't for me.