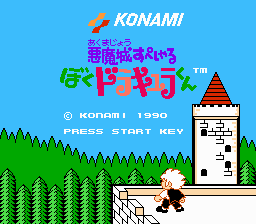 The Castlevania series has always had a sense of humor about itself. Although many of the games lean heavily on the Gothic genre tropes, there's always been a sly eye towards the sillier aspects of the franchise. Take, for instance, the parody credits at the end of the original game (Belo Lugosi, Christopher Bee, etc. for the monster's "names"), or Castlevania: Portrait of Ruin and the cream pies and paper airplanes the game allows you to use as weapons. The games are serious, but even the game makers liked to have a little fun with their series once in a while.

From that perspective a game like Demon Castle Special: I'm Kid Dracula (Akumajo Special: Boku Dracula-kun in Japan, and known simply as Kid Dracula upon its much later digital release in the U.S.) makes perfect sense within the series. Although officially not a part of the continuity -- itself being a parody of the series (that kind of started as a parody, so a parody of a parody) -- did have that all important "Akumajo" in the title, marking a certain connection to Konami's larger series. In many ways it's of-a-piece with Castlevania; the character, Kid Dracula, starts off in his castle and has to go venturing out into the lands to face down a challenge from a rival villain, Galamoth.

The game literally starts you off in the Castle Keep of Dracula's castle, the same keep the heroes are always fighting to get to normally. Everything about this game says "this is Castlevania but, you know, for funnies!" It's a game that doesn't take itself too seriously, showing that Konami could, from time to time, lets its hair down and just have fun while cranking out a charming, well made, action-platforming title. For that reason alone, whether you are interested in Castlevania or not (although you're on this site so we assume you are), I'm Kid Dracula is worth a look.

Although the game originally didn't come out in the states, a Game Boy re-imagining of the title was released a few years later (and then that game was remade back to the Famicom creating a really weird life-cycle for the mini-series). It is a tragedy that this original title didn't come out in U.S. as this game is fun, funny, and has a sly attitude towards the greater series. It also had a few notable lasting impacts on the series as a whole, such as the lead character of Kid Dracula (who is probably Alucard, or maybe Dracula). This was his first staring role and kind of set the story for Alucard and his early life under Dracula's wing (pun intended). The Kid Dracula version of this character also showed up in other Konami games (like the Parodius series of parody space-shooters), giving the character a long tail for many years to come.

More important, still, is that the I'm Kid Dracula sub-series introduced Galamoth, a special boss in Castlevania: Symphony of the Night and a soul to collect in Castlevania: Aria of Sorrow. Galamoth then returned as the driving villain behind the events of Castlevania: Judgment. All that spawned out of this one little game that, for many years, the U.S. never even got a chance to experience..

So it's weird, then, to think of the influence this game had on the series, especially a parody game that doesn't actually fit into the official series. It's weirder still when you consider that Konami likely wouldn't make a game like this anymore, being more interested in erotic gambling machines and cellphone titles that play to the rose-colored glasses of the dark and Gothic titles in the series. I'm Kid Dracula came from a special time in Konami and marks and moment when the company was willing to take one of its flagship titles and do something really weird with it. That's an era of Konami will likely will never see again.

In a mirror of our world (or maybe our world entirely and we just never realized it), there was a very bad man. He was the baddest in all the land, the darkest, the evilest, the nastiest person to ever stride the Earth. He was Dracula, Dark Prince of Romania... and he had a son. This child took after his father, being vampiric in nature, powerful in magics, and with a nasty little evil streak in him. As they say, like father like son and that certainly applied to Dracula and Kid Drac.

Not that the humorous approach to the game or the cutesy graphics should fool you -- I'm Kid Dracula is as hard as any other NES Castlevania game, just creatively so... For good or ill, the designers at Konami were downright nasty at times, putting enemies is just the right places to damage you, setting up tricky jumps to traverse, and just making it very, very hard for you to get the end of levels (let alone making it through unscathed).