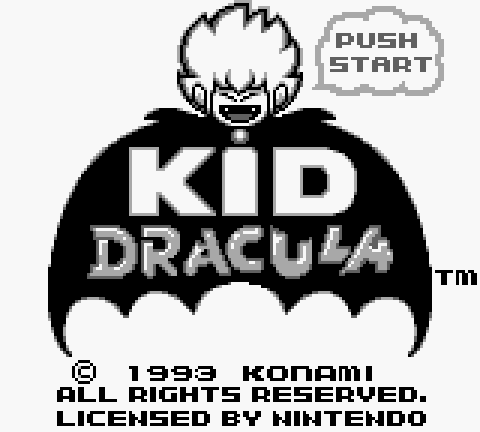 The transition for many games from Japan to the U.S. could be quite strange. Although marque titles that were guaranteed to be hits were (and are) released near-simultaneously, niche titles often never made it to the U.S. from over the pond (just look at the sheer number of dating sims and RPGs that are Japan-only for a key example). When the games finally would make it over here, they'd often go through editing and formatting to suit our Western tastes and desires, often losing that special something that made it such a hit in Japan.

One example of that in the Castlevania series was Castlevania Dracula X: Rondo of Blood, a fantastic title released for the PC Engine CD in Japan. When the game made it over here two years later (after Konami struggled to get the American TurboGraphix company to release the original edition) it was "crippled" to work on the Super Nintendo for the much lamented Castlevania: Dracula X.

In some regard, Kid Dracula, too, suffered from the translation here. Originally coming out for the Nintendo Famicom as Demon Castle Special: I'm Kid Dracula, the game's cutesy graphics and parody humor might have been a hard fit for US tastes, especially for fans looking for the next Castlevania game. Instead it took a couple of years for Konami to put together a "sequel" (or remake, depending on who you ask) of Kid Dracula (titled Akumajo Supesharu: Boku Dorakyura-kun, translated as "Demon Castle Special: Kid Dracula") for the Game Boy. Coming out on a system loved by a younger audience, the game seems like a better fit for that demographic, but because it was the Game Boy the graphics, sound, and even play-style (due to the limited screen real-estate for the monochrome hand-held) had to be toned down and tweaked.

Considered a remake in Japan, we at the Inverted Dungeon call this game a sequel as the game itself refers to it in so many words... except not exactly. Like everything about Kid Dracula, this game handles its status with a wink and a nod. Kid Dracula had his previous adventure fighting Galamoth, but now Galamoth is back using the exact plan he had before, and Kid Dracula has forgotten everything he did and learned in the first title. Now he has to go have another adventure to best his great adversary and prove, again, that he's a great hero or villain or whatever (even he doesn't really know).

Kid Dracula is a cute and fun little adventure, very much in the vein (pun intended) of the previous title. It has the same great game play, the same solid controls, and the same wacky sense of humor. It doesn't do anything new with the title, being very much in that style of a "remake" of the Famicom edition meant for a larger audience, but what it does it does very well. Some disregard this as just a hand-held "port" of the previous game, but it does add in new enemies, new levels, and a different enough adventure to feel fresh and interesting in its own right. Plus, for Western audiences, this was the first time we got to try out this title.

Of course, naturally, after this game's release the title was back-ported to the Famicom in a full color edition, a version of the game we once again didn't get to experience. Although the original title in the sub-series was brought to Western shores in the Castlevania Anniversary Collection, this second game did not get the same treatment. Sad, as both of these titles are worth playing, even if only once, to experience the weirder side of the Castlevania series.

The Story of Kid Dracula:

After the events of the his first adventure, Kid Dracula returned home to the praise and adulation of the land. He was the baddest guy around (second only to his dad, Dracula, of course), and Kid Dracula could rest easy knowing no other challenger would ever come to face him again as he was just that big (well, so to speak) and scary.

Additionally, many of the more interesting levels from the first game make a reappearance. The highlights are the roller coaster and space elevator levels, both of which provide a very different platforming experience from the bulk of the game. That said, both of those levels, as well as the general platforming throughout the game, seems to have been made easier -- the action-oriented levels move more slowly, which there are just less "gotcha" enemy placements in the game, over all giving this game a more relaxed, easier feel.