Considering the long history of firearms (firearms have existed in China since the 11th century, steadily moving their way westward along the Silk Road before arriving in Europe in in the 13th century), it's a bit surprising how long it took for an actual gun to show up in Castlevania game. Admittedly, much of that is due to the inaccuracy of ancient firearms, weapons that tended to be pretty accurate in close quarters but horrible at any kind of range (hitting the broadside of a barn would have been lucky). It wasn't until the use of rifling -- the act of cutting a spiral groove into gun barrels to give fired bullets torque and spin, stabilizing them -- become more common (attributed to the 19th century) that guns became much more accurate. So, from a historical standpoint, many of the games in the series took place before the gun was all that useful.

Still, it's not as though the concept of hunting vampires with a gun is so outlandish. Most movies set in the 1700s and 1800s featuring vampire hunters and vampires tend to have people fire guns. Ineffectually, of course, but they fired them. There's something that feels right about shooting at the beast from beyond the grave, and yet the Castlevania series took a long time to introduce firearms (instead assuming that whips were somehow the superior vampire hunting tool). Even then, their use has been limited to secrets and unlockables, a bonus to earn but not something commonly used.

The first character to use any kind of firearm in the series was Henry Oldrey in Legacy of Darkness. In his bonus mode, Henry went around the castle freeing the children Dracula had kidnapped, fighting off the hordes of the undead with the power of a six-shooter. Although the gun wasn't very strong by default, he could power it up with collectible orbs (which he'd lose if he died). The gun could fire very quickly though, and would auto-reload, making if an effective weapon.

The next firearm featured was in Circle of the Moon. There, Nathan Graves could collect various cards for his DSS Combos. When the Mars card was paired with any elemental card, Nathan would wield an elemental weapon of the same time. Pairing Mars with Black Dog specifically allow Nathan to shoot a pistol. While strong with good range (and at a reasonable for the end-game cost of 32 MP), by that late stage of the game Nathan already had more powerful, and useful combos he could use instead, muting the coolness of this ability some.

Guns didn't really take off in the series until the adventures of Soma Cruz. First featured as hidden weapons in Aria of Sorrow (and later purchasable in the sequel, Dawn of Sorrow, and then hidden in Harmony of Despair), the benefit of the handgun was its range and quick fire rate. However, it had absolutely no penetrating power, being unable to pierce enemies (or even torches and other objects). Additionally, it didn't deal much damage, thus making it useful only against weak enemies and mobs. An upgraded version of the handgun, the silver gun, fired silver bullets that dealt more damage, but the gun still suffered from the inability to pierce. 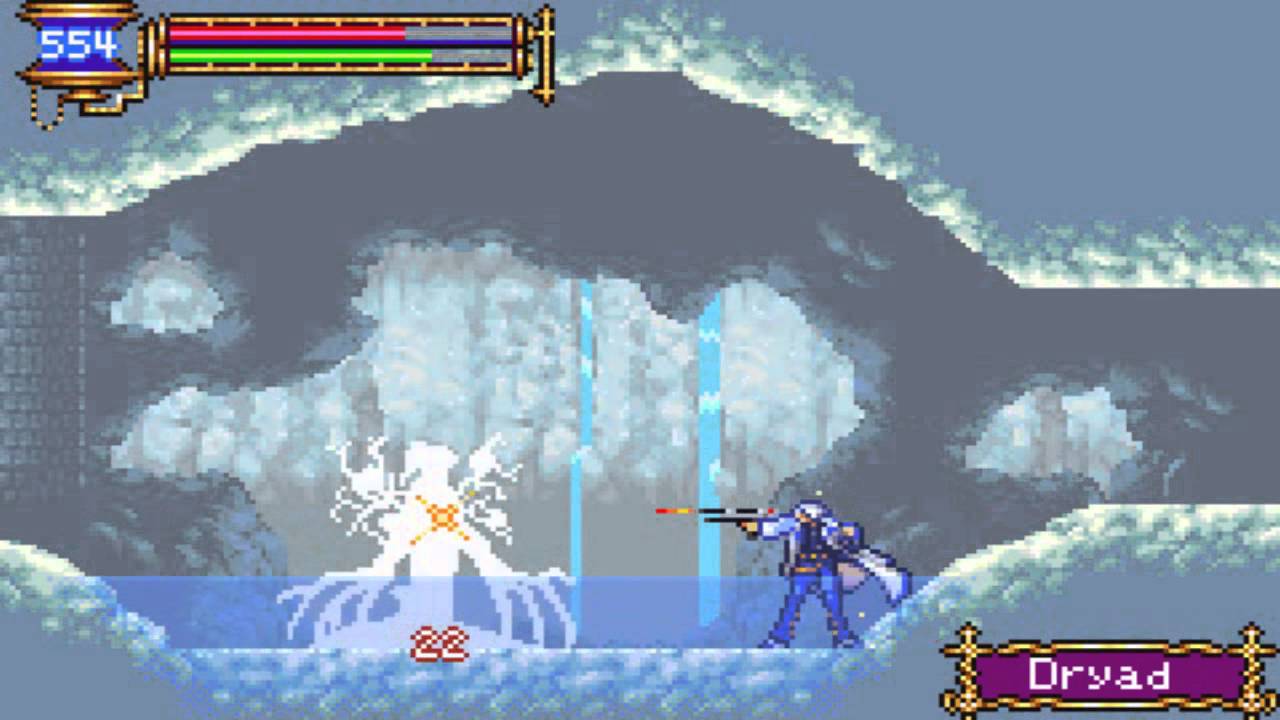 A much better upgrade was the Positron Rifle, a powerful weapon that's also notable for being the only piece of futuristic tech (so far) in the entire series). The positron rifle dealt a great amount of damage and could pierce, making it useful for mobs as well as single enemies. The only downside with the rifle was that while it was great at a distance, it dealt no damage to enemies right on top of Soma.

The 3D Castlevania games also got into the act in Curse of Darkness. In that game, protagonist could find a hidden Gatling gun which allowed him to plow through enemies with an infinite number of bullets. The gun was strong, but also fired very quickly, making it quite useful for enemy mobs. On top of that, Hector could craft the Machine Gun Shot, an Innocent Devil ability that fire short bursts of gun fire.

Although these were the only heroes that could use guns, a few enemies also picked up on the usefulness of firepower. In Order of Ecclesia, antagonist Albus used the Agartha, a gun that could also be combined with glyphs to fire powerful magic bullets.

And, of course, who could forget the delightfully ridiculous Gatling Knight from Bloodlines. Here, at least, the enemy seemed half-way appropriate considering that the game took place against the backdrop of World War I.