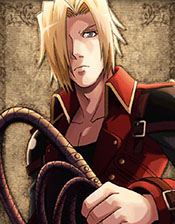 For a while there Konami was releasing a Castlevania game at a rate of one a year (and sometimes more). While the series had bounced back and forth over its own timeline, later entries tended to focus on settings much closer to modern times. This meant games set around the 1800s, 1900s, and 2000s, exploring the disappearance of the Belmont family and the eventual death of Dracula. That said, even if we had gotten used to where the story was primarily focused, it still came as a bit of shock to see Konami announce a sequel to Castlevania Bloodlines.

Althougn not hated, Bloodlines was not the most beloved game in the Castlevania series. Some of that was probably due to the system it was on, the relatively underpowered Sega Genesis, as well as the fact that the game is quite hard in places. While the game wasn't exactly a fan favorite, though, it was still and interesting step for the franchise since it didn't feature any Belmonts in leading roles and had to different characters that played very differently instead.

That's what made Portrait of Ruin intriguing. It featured Johnathan Morris, the son of Bloodlines hero John, showing that the famed Belmont whip, the Vampire Killer, had remained in the hands of the Morris family for a while. It also provided much needed information about what happens when non-Belmonts use the magical whip. Short answer: it's not usually a good thing.

When Dracula's castle reappeared in the Carpathian countryside, two young heroes arrived at the dark and gloomy gates: Johnathan Morris and Charlotte Aulin. Son of the last man to face off with Dracula, John Morris, Johnathan had a serious chip on his shoulder, especially against his own father. See, John had died years prior, his life snuffed out by repeated (some would argue necessary) uses of the famed Vampire Killer whip. He knew the whip would kill him as he wasn't a Belmont and the whip would drain the life from any non-Belmont that used it, but he still had to since the world needed saving. Johnathan hated his father for this, and he hated him more when, upon John's death, he bequeathed the ship to his son, telling Johnathan to use it to save the world. 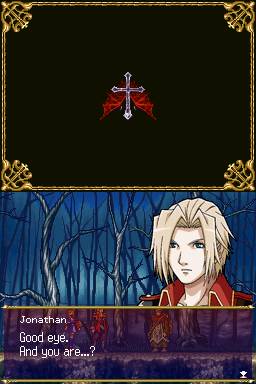 Johnathan was having none of that. Although he brought the whip with him to Dracula's castle, he steadfastly refused to unlock the power of the whip since he was in no mood to die. Events, though, were going to change his mind on that decision.

While exploring the castle with his friend (and magical prodigy), Charlotte, Johnathan soon encountered the real evil in the castle, the master vampire Brauner. A nasty piece of work with a flair for the dramatic, Brauner had painted (literally) portals to other worlds, using the power dervied from this magic to fuel his own plan to take over the castle and become the new Dark Lord. With the aid of his two daughters, Stella and Loretta, Brauner challenged the heroes to find a way to his keep where he would then kill them for their petty attempts.

Meanwhile, one person in the castle provided assistance to the yound heroes: Wind. A mysterious, ghostly figure, Wind advised Johnathan on the power of the whip (while also providing training quests the two heroes could run). As the heroes explored the worlds within the paintings, Wind gave them advice and the tools they'd need to help their future explorations.

Of course, Wind had his own secret. As was revealed eventually, Wind was actually Eric Lecarde, the other hero of Bloodlines and one-time friend of John Morris. Eric's daughters, Stella and Loretta, had come to the castle to defeat Brauner, but were instead captured, turned to vampires, and brainwashed so they believed themselves to be Brauners children instead. Eric had come to the castle, but was defeated by Brauner and trapped within the halls.

It was through Wind's advice and assistance than Johnathan and Charlotte were able to free the two women. Stella and Loretta then gave Johnathan the ability to travel into the essence of the Vampire Killer and fight the spirit of the hero within (represented by Richter Belmont, presumably because he was the last Belmont to use the whip in the main continuity and not any laziness on the part of Konami, no sir). Doing so released the true power of the whip but also made it safe for Johnathan to use it.

Fully empowered, Johnathan and Charlotte ventured deeper into the castle, finding new paintings to explore and new poweres to gain, all before their final confrontation with Brauner. However, the adventure wasn't over upon the vampire lord's death, as the Grim Reaper came out and used the death of Brauner to resurrect Dracula. Teaming up with the true Dark Lord, the two villains became a mighty force of evil that our heroes had to destroy. The battle was fierce, but our heroes triumphed.

At the end, Johnathan and Charlotte escaped the castle with Stella and Loretta. Wind was released from the curse binding him to the castle, freeing his soul for the afterlife. Johnathan, too, found a kind of peace, having finally forgiven his father and taken up the mantle of a true hero.

Johnathan is one of the starting characters in Harmony of Despair, his one non-continuity appearance so far. Of course, this whole game is a flight-of-fancy, non-continuity adventure, so nothing that happened in the game actually had any effect on the greater continuity

Johnathan plays a lot like a classic Belmont in Portrait of Ruin, using the classic whip and sub-weapons at the outset. However, there are some twists that make him more than the average whip wielder. For starters, he can gain new sub-weapons, like javelins, paper airplanes, pies, and twirling balls of destruction for a variety of attacks. He's also able to power these weapons up, making for stronger, more deadly versions of the basic subweapons. Combined with his ability, like Alucard or Soma) to use a variety of weapons and armors, Johnathan can become quite a powerhouse character.

Unlike John and Eric in Bloodlines where the two characters take seperate journeys through the castle, Portrait of Ruin puts Johnathan and Charlotte on screen at the same time; they share the same magic and health but one is always in the "lead". They can also team up for more powerful attacks and aid each other in exploration, creating an interesting gameplay dynamic unique in the Castlevania series.

The two-player team-up dynamic is lost in Harmony of Despair. While Johnathan can team up with some heroes to perform dual-attacks (as there can be a bunch of heroes running around in the game at once), the explorational aspects of the team-up were removed. They also no longer share magic and health, which might be considered a bonus. In all other ways, though, Johnathan plays the same as his Portrait incarnation, including being able to collect various sub-weapons and level them up. He's quite fun to play as, and one of the least limited of the whip-weilders in the game.