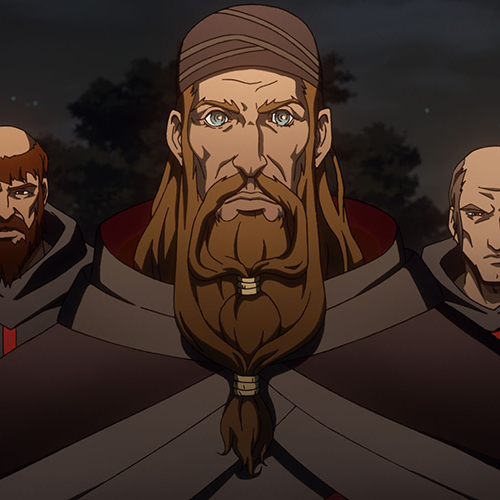 The first season of the Netflix Castlevania Anime certainly had a bent against the Church. The villain of that season, The Bishop, was an evil and corrupt leader of the Church who, effectively, sets the plot in motion when he kills Lisa of Lupu, wife of Dracula, causing Dracula to, let's say, "lash out." Although the Bishop appeared, in limited form, in the season season as well, the show turned its attention to the vampires and the Night Creatures, letting it's anti-Church angle slide.

It wouldn't stay gone, though, as the third season brought the Church back as a villain, in a certain form, with the monks of Lindenfeld and their leader, Prior Sala. These used to be holy men until a Night Creature came into town and swayed their minds. It's influence, plus the evil they saw that was caused in the Church's name, led the men to thrown down their faith. Instead they began to believe in the power of the Night Creature, accepting it, in a way, as their new god.

I suppose it's possible to say that the series didn't really have a stance on this, that the monks repudiated the Church and, thus, were no longer acting as "holy men", and that's true. The show, though, does seem to say that men can be easily swayed when they're afraid, even holy men, and that would in turn imply that faith is just an illusion and no one is truly "holy", least of all Sala. Maybe there's something to the idea that this series really does hate religion. 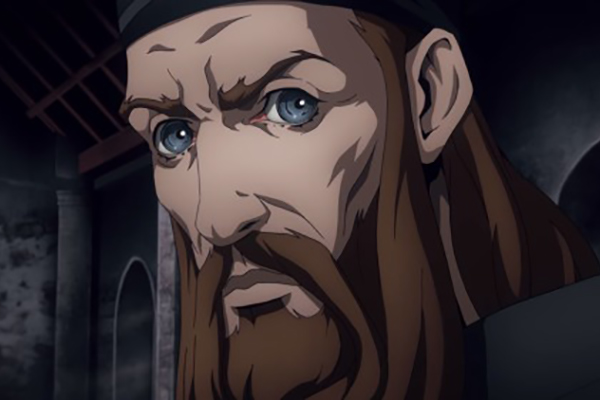 Prior Sala (voiced by Navid Negahban) acted as the leader of the priory at Lindenfeld, a monastery that was, naturally, devoted to the good word of god. However, when the Church at Gresit killed Dracula's wife, this led to a war between monster and men that left many in the countryside dead. This was an act that could sway any men's faith, even those of a Church organization. It made the monks, and their leader Sala, persuadable, and all that was needed was the right influence, at the right time, to turn them against their own faith completely.

That influence came in the form of the Visitor, a hulking Night Creature that came to Lindenfeld. The monks found the creature first, but instead of attacking them the creature spoke to them, in their heads, and what it had to say swayed these men of god, turning them into disciples of the Visitor. They brought the creature into their priory and, under Sala's instruction, the beast was put down in the crypts. Following the monster's own desires, they strapped it to a big cross, drawing alchemical symbols in front of it, performing its bidding.

Soon after, the monks of the priory emerged with new robes, robes lacking any of the previous holy symbols but, instead bearing the mark of the Visitor. It was this version of the monks that were met by heroes, Trevor Belmont and Sypha Belnades, met when the heroes came to the town of Lindenfeld. They came bearing the corpses of Night Creatures they had slain outside of town, but while the rest of the town cheered, welcoming them as proper heroes, Sala and the rest of his monk were less pleased by this act, considering it a kind of sacrilege.

Realizing that heroes in their town could mess with the instructions, the monks sped up their plans, working diligently to followed the precise instructions of the Visitor. And they had reason to be suspicious as Sypha quickly realized there was something wrong with the monks, and the town. These supposedly religious men were wearing, as their holy symbol, the alchemical notation for "hell". Further, around town they were carving into buildings the alchemical symbols for "change". The monks were planning something, the heroes just had to figure out what. Sypha and Trevor went to the Judge, leader of the town, to explain their suspicions and gain his support.

While this went on, another hero (of a kind) was in town on his own business. Following a magical relic he carried with him at all times, the magician Saint Germain was in Lindenfeld looking for something dear to him: an entrance to the Infinite Corridor the would reunite him with a lover who had been caught in this magical place. His magical totem led him to Lindenfeld and, after much searching, Saint Germain realized what he was looking for was in the crypts of the priory.

After repeated conversations, talking to Sala about how he wanted to research the books at the priory, Sala eventually let Saint Germain into the priory. He was to perform his research, but any relevant information about Dracula was to be turned over to Sala. The monks had a particular interest in Dracula, a worrying interest. Saint Germain, though, looked for any chance to explore (despite Sala's instructions) and eventually found his way down to the crypts where he saw the horrifying bulk of the Visitor. He fled, running to Trevor and Sypha to explain what he saw. Together they all convinced the Judge to strike, to take out the Monks before they carried out whatever they had planned.

Sadly, before the Judge could get his guards in position, Sala and his men launched into their ceremony, calling for the power of the symbols. All of the alchemical symbols around town ignites, lighting fire to the houses of those that lived in Lindenfeld. The entire population of the town was burned alive, their souls flying to the Visitor to feed his power. He grew fat, and strong, and with this power he opened a gateway straight to the Infinite Corridor and beyond, a portal right to Hell where Dracula and Lisa were being kept.

Seeing what he'd done, what the beast had actually desired, Sala fled, only to find his way cut-off out front of the priory. As Trevor, Sypha, and Saint 'ermain went into the priory to fight the Night Creatures within, Sala and the monks were confronted by the Judge and his men. Sala and the Judge fought but it was Sala that came out the victory, stabbing the Judge in the gut, delivering a mortal wound. The Judge sake to the ground, bleeding profusely. He was angry at Sala but, seemingly as a suddenly act of mercy from a dying man, the Judge instructed Sala to take a secret path out of the town through the back wood. This would allow him to travel to safety.

Sala fled, following the path the Judge set out. He felt safe, he felt free, he was no longer to blame for what happened in town. The Judge, though, was a sadistic man in his own way and the path he gave Sala wasn't to safety but a spike trap, set and hidden in the road. Sala fell (quite literally) for it, impaled upon the spears within, dying there just on the outskirts of Lindenfeld, the town he had betrayed.