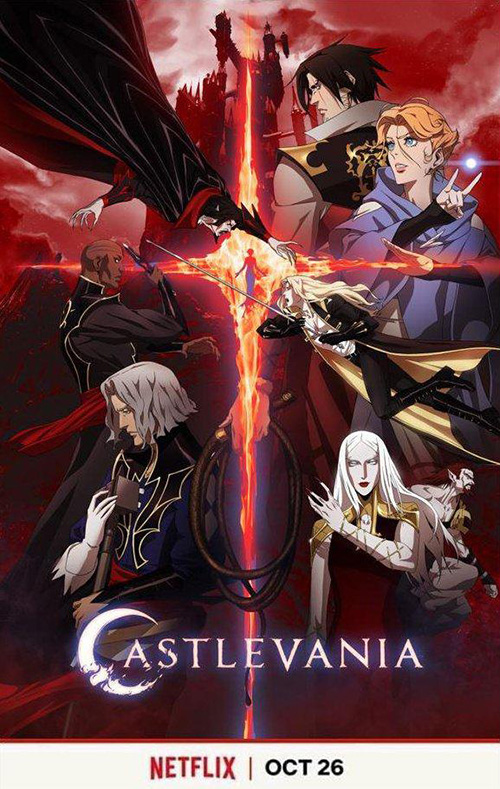 When last we left off, the forces of darkness (creatures aligned with Dracula) had invaded a small, Wallacian town only to get beaten back by the combined forces of Trevor Belmont, Sypha Belnades, and Alucard Tepes. The local arm of the Church had fallen, attacked and destroyed by the monster, which themselves were then destroyed by the heroic trio. Aligned together on a single goal -- the defeat of Dracula -- the three then found their next mission: exploring the ancient, ancestral home of the Belmonts to find it's secret vault of mystical secrets. With these magical artifacts, the three heroes just might be able to defeat Dracula and clear his evil from the land.

But there's more going on than just the fight against evil. Forces are at work at Castle Dracula, too, tearing apart the delicate political balance of the Dark Prince's vampiric generals. Carmilla, a noble vampiress newly arrived at Dracula's court, has machinations of her, a plot to remove Dracula from his throne and set herself atop as the new Queen of the Night. TO that end, she enlists one of Dracula's lieutenants, Hector, a devil forgemaster who can build her the army she needs to beat back Dracula's forces and conquer the world. This will lead to a three-way contest between vampires and heroes for the very soul of Wallacia.

The Castlevania anime was originally planned as a trilogy of movies, with season one adapting the first of three scripts written by Warren Ellis. While that story had its flaws, there's no doubt that the season was a tightly contained story that held a lot of promise. Season 2 provides a larger, more fleshed out experience, loosely adapting the next sequence in the tale. Unfortunately, in the process of expanding its scope (and overall length, up to eight episodes from first season's four), the series seems to get a tad bloated. The pacing of the season season is off, leading to a few early episodes that drag when the series should be flying.

Part of the problem is that the major leads from first season, both the heroes as well as Dracula, are all sidelined for the first half of the season. While we get an early battle with the heroes in episode two, they quickly move into the Belmont estate and then spend five episodes browsing the libraries in the basement. That's literally all they do, and that's still more exciting to watch than Dracula. The Dark Lord is less dark and more mopey for nearly the entire stretch of the season, preferring to sit in his chair, staring at the fireplace, lamenting the death of his wife. I get that he's in grief, and that he has dark matters on his mind, but watching a guy grieve for seven episodes is not interesting in the least. 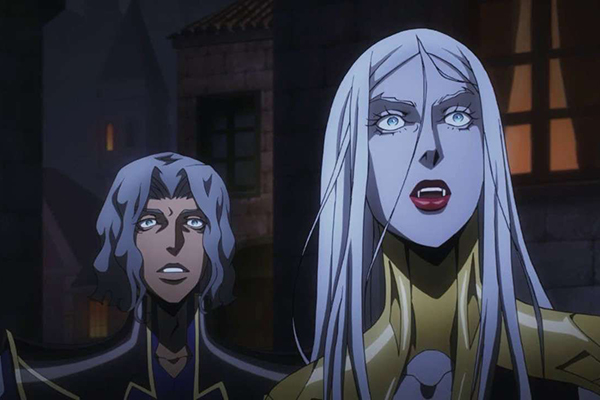 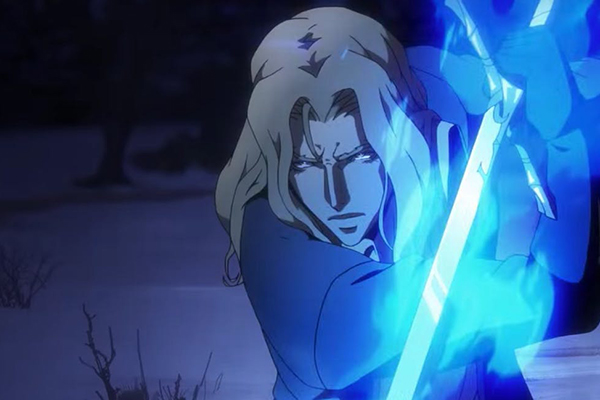 The series leaves the brunt of the storytelling to new characters introduced in season two, specifically Carmilla (Murray), Hector (James), and Issac (M'Cormack). While we, the Castlevania fans, might know who these characters are, new viewers are less likely to know anything about them, so the series has to spend time introducing each new character. This only leads to more bloat, more episodes spent on anything other than what should be the main driving force of the season: Dracula's war on humanity. Now, that's not to say the characters aren't interesting, and I certainly am interested in the implantations of these three new villains for the series moving forward. I just wish they'd been worked in more organically, hinted at in season one so that when they're given more time in season two we wouldn't have to spend so many episodes on their setup.

Carmilla, certainly, is the most interesting of the three. Here, she's written as a low-level noble vampire who killed her own master to take over his terrain. A power hungry villainess, her motivations are clear and its interesting watching her move all her pieces in place to make her play for the throne. That fact that she's not perfect, and makes some mistakes along the way only cements her as an interesting villain moving forward (presumably making her the focus on season three) -- flawed villains are more interesting than perfect ones -- but considering the primary villain of the series is supposed to be Dracula, at least in the first two seasons, it was a little weird to give so much time over to Carmilla.

Lets also note that the Carmilla depicted here is vastly different from the one we're used to in the games. Not only does she look different -- a pale, Nordic blond instead of the southern European brunette we're used to -- but she's also driven by completely different desires in the series. No longer strictly loyal to Dracula, I doubt that she'll be the one to bring him back if and when his resurrection is required. That said, considering that we don't yet have an analogue for Death in this anime (and all the rest of Dracula's vampire generals meet fairly grisly deaths over the course of the season), I'm not sure who else could do the deed. Maybe this will be the first Dracula production (Castlevania or otherwise) where he doesn't come back from the dead (although I wouldn't count on that).

Hector and Issac aren't as interesting, largely because their motivations are shrouded for much of the season. They both have the gift of reanimating dead tissue, turning their creations into monsters if they so desire. Each were subjected to cruelties of some kind or another, but due to their past they've each become closed off to those around them. The series even calls them out on this, noting that Hector is a child in a man's body who simply wants to play with his "animals", which Issac just wants everyone, human or otherwise, to go away. They aren't characters to relate to, and since each of their stories is reduced to a single event in their past, a lone flashback for us to try and get a sense of who they are, the trouble they've seen never sticks. One incident is not enough to understand their evil, no matter what the show might think. 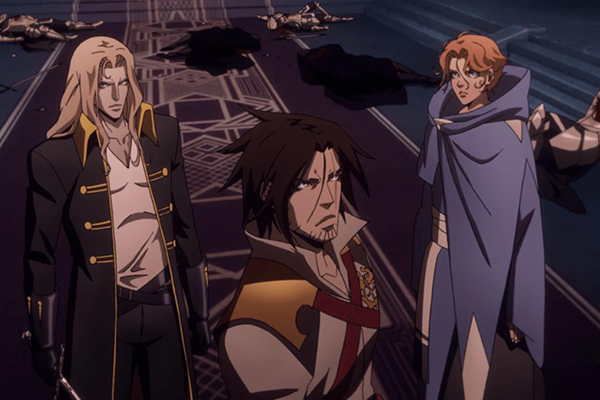 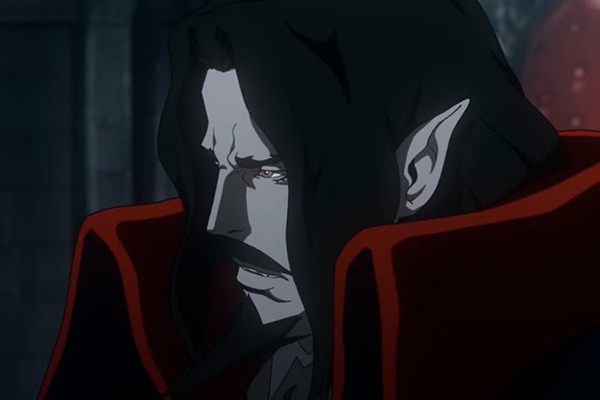 When the heroes are on screen, they're pretty great (even if it's just them hanging out in a basement for a few episodes). The voice actors has an easy chemistry and their dialogue is likable enough. We don't get enough time with them to really sell some of their character motivations (like Sypha and Trevor falling in love over the course of the season), and Alucard still remains a closed off husk of a character, but you end up liking all of them more here than you did in season one. It's a step in the right direction, and since it seems like we'll continue following them for season three (at least), I'm glad the series did some work to repair the dynamic of these three leads.

Moving forward, I'll be curious to see where the series goes. Certainly the last couple of episodes were pretty good, especially when we had the big action set pieces that were promised all the way back at the beginning of the show. The confrontation between the heroes and vampires was really cool to watch (scored by "Bloody Tears" no less), and the final battle with Dracula was also impressive. If, as it seems like, we'll be dealing with Carmilla, Hector, and Issac as the primary villains moving forward, the hope would be that we get a better hero-to-villain dynamic with plenty of action in the process. If the series can pull that off, it might just grow to be the anime series the fans have dreamed of.