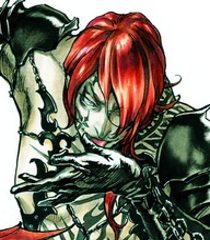 How often has this happened to you? You're in deep with an evil organization, a solid worker with no qualms about crafting demons to be used in your masters plans. Then, one day, heroes barge into the castle and suddenly you realize, "hey, wait, I'm one of the bad guys." What are you supposed to do with that knowledge. Well, if you're Hector, hero of Castlevania: Curse of Darkness, you change your ways, go clean, find a new life, settle down, start to raise a family. Sadly for Hector, this is not his story.

No, instead we're looking at one of his co-workers back in the time when Hector was a servant of Dracula. We speak specifically about Isaac, another of Dracula's minions and continuing faithful servant. While Hector left the life, Isaac doubled-down, getting deep in the organization all in a quest to aid his dark master and start the cycle of evil again.

We have to assume it's out of loyalty. We've looked at the hiring contracts Dracula uses and it's certain Isaac didn't stick around for the benefits.

For years, Isaac and Hector served faithfully at the right hand of Dracula. As two mortals with the ability to craft demons (called "Devil Forgemasters"), these two were vital for Dracula's plans as they could endlessly crank out minions to populate his castle and fuel his legions. Unfortunately for Dracula and his whole carefully crafted organization,in a href="?section=chronology&page=1476">1476 AD a hero, Trevor Belmont, came calling at the castle, fought his way all the way up the towering demonic fortress, and defeated Dracula, sending the whole shebang crumbling to its very foundation.

At this point, Hector legged it, realizing the error of his ways. He gave up the life of a Devil Foregmaster, moved to a small town, found a woman, Rosaly, to love him, and found simple pleasure in the life of the common man. Isaac, still a faithful servant, was incensed at this betrayal and for the next three yeras, he watched, and plotted and planned.

Eventually, on a day seemingly like any other, Rosaly weent out about town to sell her apples (and thing she apparently regularly did). What she didn't know was that for the days leading up to this faitful one, Isaac had been spreading rumors around town that Rosaly was a witch, that her apples were poisoned, and that Roasly was evil. THe townspeople, gullible schmucks that they were, believed the stories and burned Rosaly at the stake. 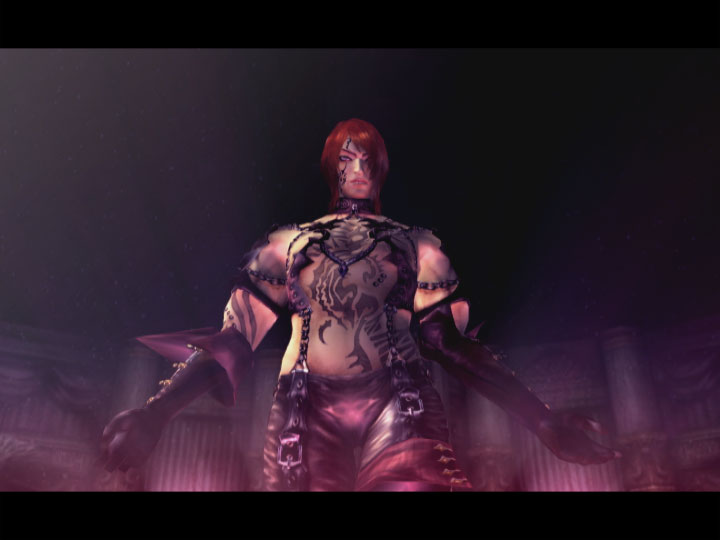 Hector was, understandably, quite bereaved at this turn of events. With clues that Isaac was somehow behind this betrayal, Hector storms off to the castle to have his revenge. However, Isaac would not let their encounter end so quickly. He fled, leaving Hector to chase him around the countryside. Their first battle occured later, at Cordova, where Isaac played with his new toy, bapping hector around for sport. However, Isaac's sister, the witch Julia, interceded, aiding Hector and preventing Isaac for carrying outy his plans. Isaac fled once more with promises of a further encounter.

Later, at the Aiolon Ruins, Hector approaches as Isaac and Trevor engaged in a battle. Trevor had been there, searching for a way to stop the darkness. However, Isaac injures Trevoe, gaining what he needed to further his plot, the blood of a Belmont so that he could unseal the abandoned castle. Later, after fooling Hector into resurrecting Dracula's castle, Isaac appears out of nowhere, stabbing Trevor to remove one of the threats to his plans from the board.

Finally, tracking Isaac into the castle, Hector confronts his one-time friend. This time, in their battle, it's Isaac who falls. He had planned to use Hector as a host for the resurrected Dracula, but with his own death that plan had to change. Instead, Death (who had been pretending to be a man named Zead during this whole plot) revealed himself. He used Isaac's dying body as the new host for Dracula. With Hector still alive, though, there was a hero ready to fight the Dark Lord. Dracula was son defeated, joining his own minion, Isaac, on the way back to Hell. In the end, all of Isaac's plans were for naught, and Hector went back out into the countryside once more to find some kind of peace in his life.

Arriving in season two of the Castlevania anime, Issac is one of Dracula's generals, and one of only two of them that are human. Along with Hector, Issac serves as a Devil Forgemaster for the Dark Lord (much like his stated role in the backstory of Curse of Darkness). Together, the two work to supply Dracula with the forces he'll need to wipe all of humanity off the face of the Earth.

In the series, Issac has been hardened by a life of turmoil. He serves willing, and without reservation, at the feet of Dracula and would do anything for his chosen lord. This includes wiping all of humanity from the face of the planet, a fate for his kind he's all too willing to deliver. He's, perhaps, the only friend Dracula has, and certainly the one person Dracula truly can trust, a fact set in stone when Dracula teleports Issac out of the castle when it looks like all has been lost near the end of second season, setting him Issacs eventual evil plans moving forward (potentially so he can resurrect Dracula with his forgemaster powers).

In their first encounter, after a short cut-scene, Isaac with call forth his devil, Able, who will fly around, attacking at the player with his firey claws. it can also charge across the room in dash attacks, and sometimes dive under ground before leaping up to attack. Isaac, meanwhile, will jump around, occasionally summoning damaging cyclones around him. He'll also pound the ground, causing shock waves to radiate out. You'll have to jump these to avoid damage. He'll also occasionally swipe at you with his spear. The worst part of this battle is simply that Isaac has a lot of health and it can take a fair bit of time to wear him down (with him doing his stupid laugh, repeatedly, the whole time). Just be persistent and you'll get the job done.

Their final encounter, again after a cut-scene, Isaac will charge in, coming after Hector with his laser sword. He'll also summon his devils to attack you, giving you more to deal with. With the devil out, Isaac is often guarded against attacks, so you'll have to deal with what he summons before you can carry on with the fight (not that it stops Isaac from coming after you in the process). This combined with his once again obnoxious level of health, can drag this fight on far longer than it needs to take.