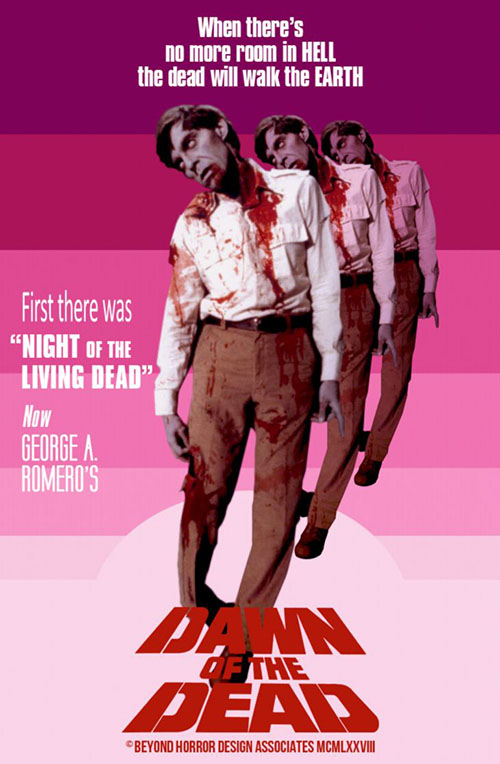 As I have noted in the past, I'm not a huge fan of the original Night of the Living Dead (much prefering the 1990 remake instead). The original does what it can with a small budget and black-and-white filming, but there's something missing for the film that, for me, keeps it from being a truly great horror film. In my opinion the series didn't really reach its stride until the first "sequel", 1978's Dawn of the Dead.

I put the word "sequel" in quotes when I talk about any of the Dead films because they are, effectively, sequels in name only. All the (official) movies were directed by George Romero, and they all tell the evolving story about what would happen in the world were overrun with zombies. But none of the movies feature the same characters making them all more companion pieces of an evolving world, not sequels to specific stories or plot-threads. Of course, it's hard to make a sequel to the original film when that movie went out of its way to kill all its characters.

Focusing on the world and following the evolution of the zombie outbreak is a wise choice and one that, frankly, I would have liked to have seen even if the original film had left any of the characters alive. With ten years between production of the films, ROmero had plenty of time to think about the world he was building, to come up with ideas about what the zombies represented and just what would happen to humanity in a situation such as this. And, as hinted the first movie but explored even better in its first "sequel", Dawn of the Dead, Romero illustrates that in a zombie apocalypse the real monsters are the humans.

Dawn focuses on four chaarcters: Stephen "Flyboy" Andrews (David Emge) and his girlfriend Francine Parker (Gaylen Ross), two people who work at a TV station and decide to flee (taking a news chopper with them) when it looks like the outbreak has gotten to the point where all of humanity is lost and there's no hope left, along with their friend SWAT officer Roger "Trooper" DeMarco (Scott Reiniger), a cop sent (along with his unit) to clear zombies out of the projects, and a buddy he made on assignment, Peter Washington (Ken Foree). These four fly off into the night to find some place they can hide out until, hopefully, the zom-poc blows over. That's how they find the mall they'll soon call home. 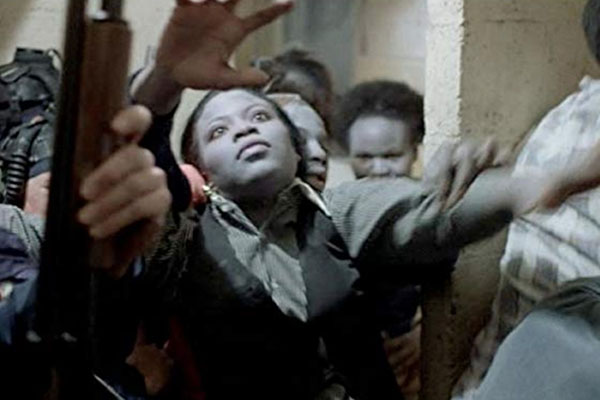 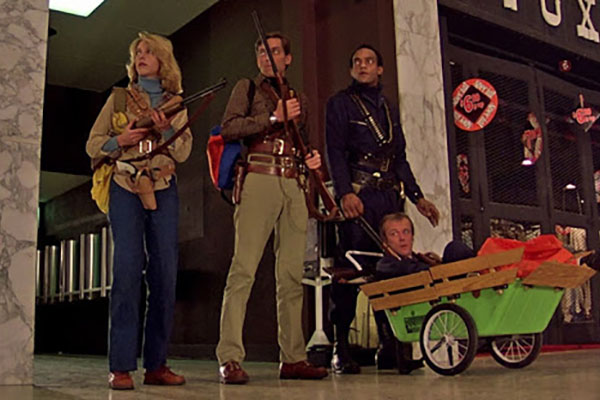 The mall is one of those (old at this point) super malls that not only had a bunch of regular stores but also a grocery store in it. Once they explored the place and saw how the zombies in it were spread out, the cops decide this could be a place they would be able to hold up in for some time. They block and lock the doors, kill the zombies off within, and start settling into their new lives. But eventually their peacful existence would come to an end as other humans, a group of raiders, would see this nice place they had and would try to invade. The zombies might be able to pick the humans off one by one but the real threat would be the other humans roaming the wasteland of this new, dark world.

Romero always liked to insert messages into his zombie films, to use the monsters on display not only as couriers for gore and eath (which they were good at, of course), but also as a political message about humanity. The obvious message, that when push comes to shove humans are unreliable and will screw each over at every turn, is an obvious one. Humans suck, Romero is saying, and when you see groups running around armed like during the Coronavirus outbreak, out for themselves and damn the consequences for anyone else, it's hard to argue with that point.

But in seeing the mass-consumerism of the late 1970s, the creation of the then-new malls, Romero saw a canvas he could paint with his movie. The humans don't just land at a mall because it's a convenient place for them to make into a home (although it was, with plenty of food and goods for them to use), but also because the teeming masses of shoppers hitting these places would wander aimlessly in crowds, dead eyed, there to consume and consume and consume. Sounds like zombies to me.

Deep down, the goal of Dawn of the Dead wasn't to just present the zombie apocalypse but to delve into the minds of the humans that roamed it after. Illustrating how the zombies were a lot like us was just part of the story, but then Romero had to document how far down the path of evil humanity would go just to survive. Yes, there were the raiders who come, cause problems for our band of heroes, and ruin the home they carved for themselves. But it's not like our heroes are blameless -- they egg the raiders on once the bad guys show up, shooting at them and escalating the violence. And, even before then, our heroes were on the edge, losing their core goodness as the zom-poc wore on, draining away who they were and changing them into their own versions of the dead-eyes monsters they were fighting against. 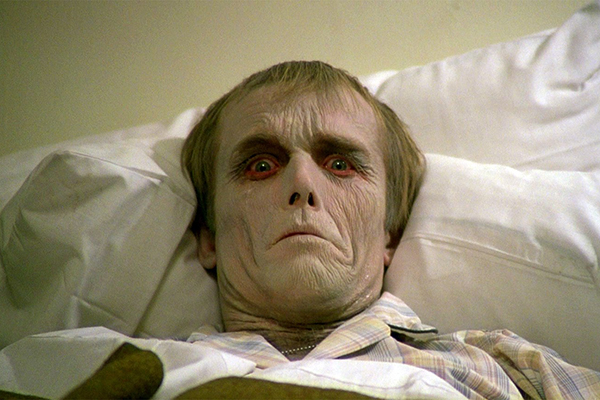 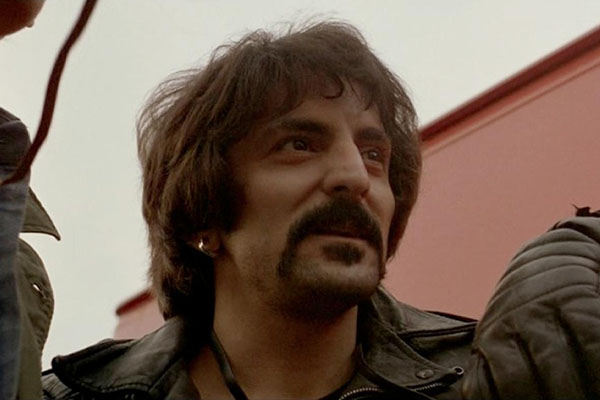 Take Roger, for example. Once our survivors reach the mall, Roger is the first of them to fall. While helping Peter blockade the doors to the mall (with large trucks on the outside, meant to keep people like the raiders out), Roger is nearly bitten by a zombie. He goes a bit round the bend at this point, clearly from the shock of his near-death. This causes him to lose his edge, to start making mistakes, and it eventually gets him killed. Its in his eyes, hollowed out from the shock and fear, that he starts to resemble a zombie even before he gets bitten, as if the movie is saying, "there's more similarity between us than we might want to admit."

Of course, my favorite little detail about how far humanity has fallen comes early in the film. As our heroes are fleeing the city in their chopper another survivor stops them (while they load the chopper) and asks if they have any cigarettes, and they all say, "no." Then, on the helicopter they all light up, smoking deep. As a smoker pointed it there's an unspoken code, the "smoker code" where if another smoker asks to bum a cigarette you give them one. Humanity has to fall very far for the smoker code to no longer apply. It's a little thing but it prefaces everything that's about to come.

In it sense of the world, in showcasing the fall of humanity, letting us know just how bad things have gotten, Dawn of the Dead is a masterpiece. Plus, it's a well-directed, well-acted, taunt and tense zombie film with all the blood, guts, and gore a true zombie hound could want. It's not my favorite film in the series or the genre (I'm in the minority in that I prefer the next sequel, Day of the Dead) but it's right up there among the best. While it's visuals look a little dated at this point, being a very 1978 film in fashion and locales, in all other respects this film holds up magnificently. To this day this film remains a classic for a reason.