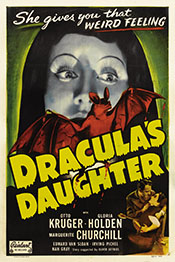 Moments after the events depicted in the first Universal Dracula film, we pick up with two cops descending into Carfax Abbey (in a set that looks nothing like Carfax Abbey in the first movie, but let's just move on). There they find the dead body of Renfield and, further in, Van Helsing (or, as he's titled in this movie, "Von Helsing", obviously a cover identity) leaving the now-thorough-staked body of Count Dracula. Obviously the cops arrest Van Helsing for the murders and arrange for the bodies to be moved the station.

Later that evening, a woman comes into the station. With the aid of her vampiric powers (via a shiny ring and not just her eyes) she hypnotizes the cop on duty and makes off with Dracula's body. She, along with her manservant, Sandor, the burn the body of Dracula. You see, she's actually Dracula's daughter (title drop) and she's attempting to break the curse of vampirism she carries by destroying the body of her father. Sadly. when that fails, she desperately searches around for some other means of breaking her affliction, including the aid of psychiatrist/hypnotist Dr. Jeffrey Garth. Will she manage to overcome her affliction or will she remain and evil vampire for all time?

Despite some unevenness, Dracula's Daughter is a much better made and more assured production that the original 1931 Dracula. To start with, the director and cinematographer obviously were more comfortable behind the camera this time around than anyone was on the original film. The camera is steadier when it moves, the cuts more fluid (although there's still an over reliance on fade-to-black/fade-from-black that's really indicative of the editing style from this era). Plus, the people in scenes are framed in such a way that you can actually see their faces and reactions, allowing you to get a sense of them as more than just well-paid extras.

On the acting side, too, things are an improvement. Gloria Holden seems much more comfortable playing a vampire than Bela Lugosi did in the original film. Although not menacing (which we'll get to in a moment), she has an assurance to her performance, an understated acting style that makes her shine in her scenes. The rest of the actors are equally assured, with Otto Kruger as the doctor being another stand-out (which should be expected as he was a co-lead in the film). 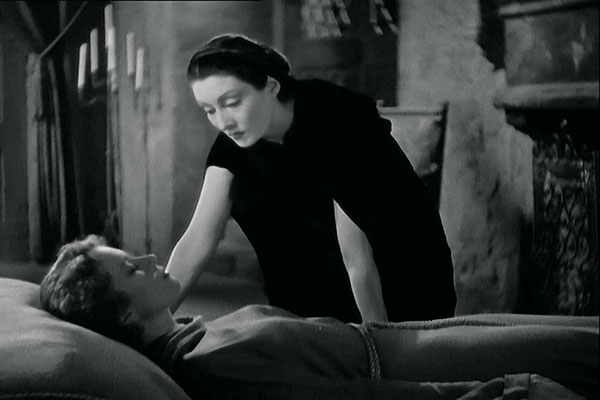 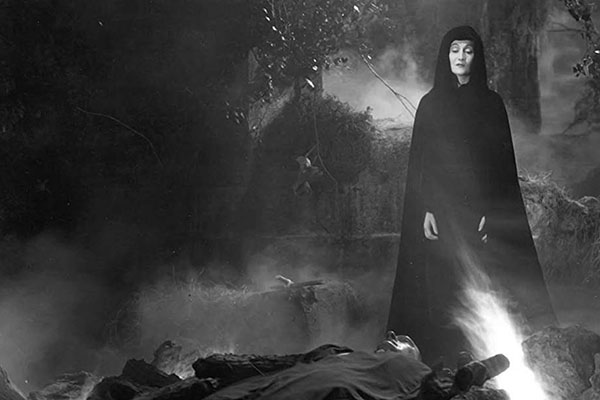 Sadly, not everything in the movie works so well. Some characters seems to be written for a different kind of movie, one much less a horror film and more of a screw-ball comedy. This is most apparent in the opening scenes with the bumbling police officers (it's a relief when they're quickly brushed out of the film), and then later with the good Doctor's assistant, Janet, who seems like she was written for a Thin Man film (hyper-kinetic speaking and sarcastic presence).

And, like with the original Dracula, this isn't really that scary of a horror movie. That is likely because of the censorship issues of the time (this film with through multiple attempts at a script that were all shot down before the final version was approved and filmed). Like with the original film, this one has a couple of implied deaths, wailing screams heard from off-camera, but nothing on screen to show any horror. It lacks any kind of tension really needed to really get good scares.

That said, the story itself is a nice change of pace from the original (and many of the Universal and Hammer horror movies that would follow). Countess Zaleska is less a true monster and more a tragic figure, and I really liked how her story was about her trying to control her impulses, to be free of her curse. The tragic vampire is a trope for modern audiences, but it's not something seen very often in the early days of horror cinema.

For anyone doing a watch through of classic Universal horror, Dracula's Daughter should certainly be on the list. It's not as scary as it could be, sadly, and there are certainly parts of it that don't work. It is, however, quite a good character study of a vampire and well paced enough that it's never a slog to get through it. Well worth it for any horror fan to see.