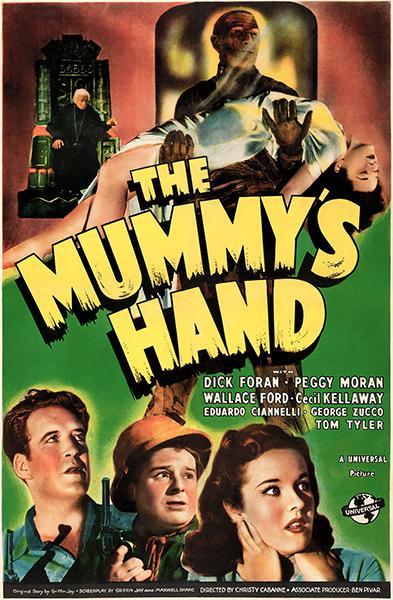 Long ago, in Ancient Egypt, the Princess Ananka. Death took her quickly and then, just as quickly, she was mummified and entombed, sending her soul on to the afterlife. However, one priest, Kharis, had a deep love for the princess and wanted to see her returned to life. He broke in to the sacred temple, stole the forbidden rites and some tana leaves, and went to her tomb to use magic, and the leaves, to bring her back from the dead. He was interrupted in his endeavor by the Pharaoh's guards. They took Kharis away, cut out his tongue, and mummified him alive. He would serves as the protector of the forbidden magics, and the princess too, for all eternity as punishment for his sins.

This story is told to us (very slowly) by the High Priest of Karnak to his acolyte, Andoheb, at the time of the High Priest's death, passing on the sacred duty to serve and protect Kharis and ensure the mummy continues his eternal watch over the lands of the dead. Later, though, a couple of American treasure hunters, Steve Banning and Babe Jenson, come to Egypt to try and find the lost tomb of Princess Ananka. Although the Cairo Museum (run by Professor Andoheb) wants nothing to do with their planned expedition. The two men find funding, though, from the Great Solvani and his daughter Marta. Together this group sets out (with men and equipment) to dig up the tomb. But as people start dying left and right, everyone starts to worry that there may be a ancient curse on the place. A curse executed by... a mummy!

Although I try to watch older movies from the perspective of the era they came out in, it's hard to watch The Mummy's Hand and recoil from some of the terrible politics in it. Even more so than the first Universal Mummy film, The Mummy's Hand is mired in awful politics and racist depictions of native citizens.

To start with, the heroes really aren't all that heroic. Banning and Jenson are supposed to be the characters we root for, but near as I can tell the whole reason for that is because they're white and American. In any other movie these two would be the treasure hunters that are offed quickly or at least arrested for their crimes. They go to Egypt not to increase knowledge or better an understanding of an ancient culture but because the tomb of Ananka is probably filled with gems and treasure. Finding the tomb will make them rich and famous, something they note repeatedly. It's called grave robbing now but, apparently, in 1940 it was proper motivation for a protagonist. 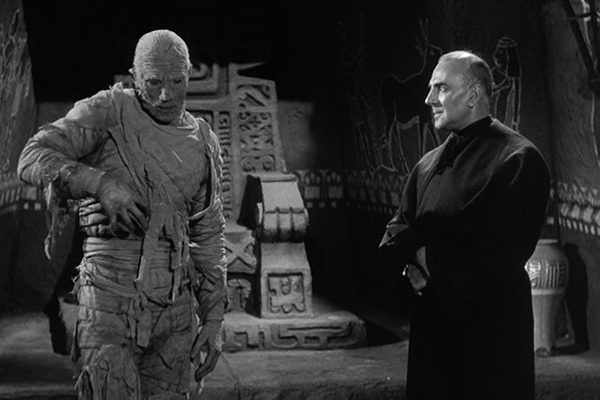 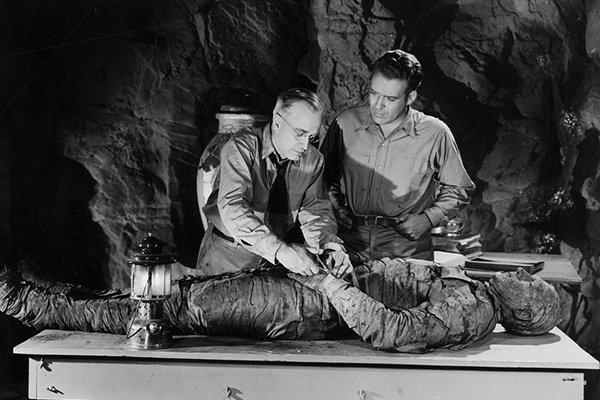 The only reason why we end up rooting for the heroes at all is because the villain is so laughably cartoonish. It's like the movie producers knew their characters were stuck with old, imperialistic attitudes so they told their George Zucco to go so over the top all the scenery would run frightened before he had a chance to chew it. His character goes from protecting Kharis to outright saying, to the mummy, he was the mummy's master, to then deciding to take the old female character in the movie, Marta, as his unwilling eternal bride. He's not an enjoyable bad guy, just a collection of evil things given a name.

The titular mummy isn't even really a factor in the film. Unlike in the 1932 Mummy (upon which the opening section of this film is largely based even though this flick isn't a true sequel), the Mummy here isn't a charismatic character. The beast is just a hulking, wordless corpse who shambles around and occasionally strangles people. There's no magic, no deeper plot line, no romance for the ages (barring Andoheb sudden, weird fixation for Marta). It's just a guy in some decent makeup, leaving us with little to care about on all fronts.

Thankfully, I guess, the one good thing about the film is that it doesn't overstay it's welcome. The story is very slight and the film burns through everything it has in about an hour. I'd say the short length of the film would be a mark against it, but a number of Universal Monster movies from this time period all clocked in around the same length. You can't really fault the film for being consistent.

Still, there's not much to the movie. The characters aren't that great, they do dumb things with little motivation, and then just as quickly as the action starts the movie ends. All in all it makes you long for a more modern take on the source material (even if you have to settle for the kinda-sorta-okay 2017 franchise reboot). This semi-sequel from back in the day is better skipped by all but the most hardcore of aficionados.