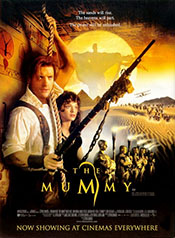 In ancient Egypt, there was a Pharaoh, his mistress (Anck-su-Namun), and a High Priest (Imhotep). Imhotep was in love with Anck-su-Namun, and the two would frequently have affairs together. The Pharaoh found out, one evening, coming in on Anck-su-Namun just after Imhotep hid in her room. When the Pharaoh figured out what was up, that some one had touched his mistress (among other things), Imhotep attacked the king. He and Anck-su-Namun killed the pharaoh, and Imhotep fled while Anck-su-Namun held the guards off, sacrificing her life to save that of Imhotep's, knowing that the high priest could bring her back from the dead.

Imhotep does indeed try, stealing her body and taking it to Hamunaptra, the City of the Dead (home to one of the world's most rockin' Hard Rock Cafes). During the ceremony to bring her back, though, the Pharaoh's guards halt Imhotep, sending Anck-su-Namun's soul back to the afterlife. Imhotep's servants are mummified alive (plainly not having their organs removed beforehand, as that would defeat the point of the punishment), while Imhotep was given the worst torture of all, the Hum Dai -- buried alive, in mummy wrappings, entombed with a horde of flesh-eating scarabs.

Centuries later, the tomb of Imhotep is disturbed by two archaeological parties. One group, lead by the reluctant Rick O'Connell (who had been to Hamunaptra a couple of years before and really didn't want to go back, what with it being a cursed place and all), and consisting of Evy Carnahan, a Egyptologist looking to study the ruins, and her idiotic brother, Johnathan (who wants to steal anything valuable). The other party consists of mostly cannon fodder to be fed (slowly during the course of the movie) to Imhotep when he comes back from the dead.

Which, of course, will happen because it wouldn't be much of a "Mummy" movie if the titular beast didn't come back from the dead and started wreaking havoc on the world. It's up the Rick, Evy, and Johnathan (more from the first two) to stop the Mummy before he gets up to full power and takes over the world. 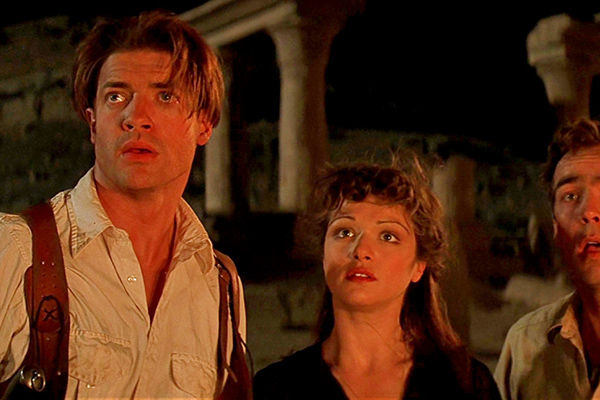 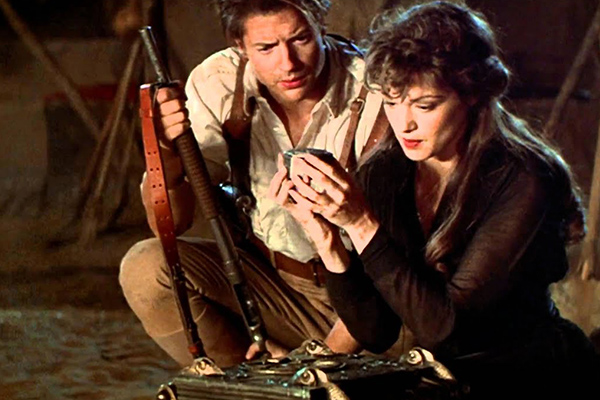 The Mummy is a bit of an odd movie. That has to be stated first. Unlike the previous Mummy flicks from Universal and Hammer, this movie is not really a horror flick. It's more an adventure serial on the order of Indiana Jones. Rick is our Indiana stand in, the brave, bold adventurer forced to battle whatever comes his way because he's the only one left standing. Evy is our Indiana Jones girl, the pretty damsel-in-distress with just enough backbone to stand up to our hero. And Johnathan is... well, the comic relief. Kinda like Short-Round. In fact, he's as annoying as Short-Round, so the analogy is pretty good.

The heroes, as in an Indiana Jones flick, are looking for the treasures and knowledge of an ancient civilization, and inevitably they have to go up against the supernatural on their quest to save the day from the generic enemy they have to face (here, a powerful Mummy and his followers as opposed to Nazis). And even though it's very much an homage (clone, really) of the Jones flicks, it works. The characters are fun, the plot light and breezy without being too silly, and the action is fun to watch without sticking around too long.

The credit for this movie working really belongs to Brendan Fraser and Rachel Weisz. The two actors manage to make a fairly schlocky script work really well, taking their characters and making them not just likable, but relateable. It's hard to say Fraser is a good actor, but as much as it seems like back-handed praise, this is among his best performances (right up there with Airheads). Fraser is able to carry the movie, giving O'Connell the necessary gruffness and bravado he needs to be the hero during the action, and yet having enough tact to make his character flawed when it gets to those boring talky bits.

Weisz's Evy is cute and ditsy, everything the script wanted out of the expectedly flat character. But Weisz, as with Fraser, is able to take this character and make her feel alive. You get that she's a smart Egytologist, and we believe it (certainly more so than anyone would ever believe Denise Richards as a nuclear physicist in The World is Not Enough). She gives Evy the full package, and the movie is richer for it. 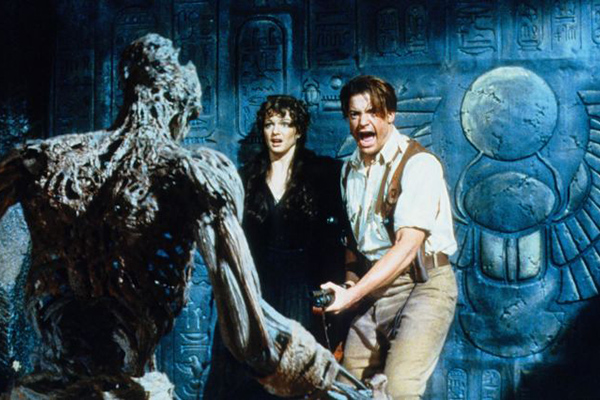 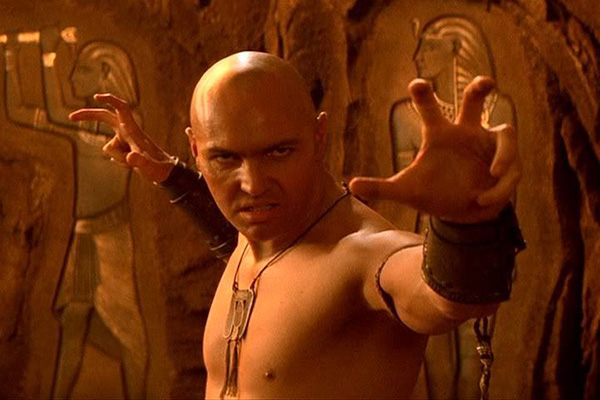 Mention should also be made of Vosloo as Imhotep. In the Mummy movies, the title character is often just the shambling, evil monster, devoid of much in the way of personality (explainable as all his organs, and tongue, were removed before entombment). And while this Mummy could have been the same, an evil menace that appears on screen, kills people, and then disappears again (probably having tea and crumpets off screen with the Creature from the Black Lagoon), Vosloo makes his Mummy interesting -- dare I even say, charismatic. Vosloo masterfully makes you care about a character that really should be irredeemable (like the Plutonian), rooting for the bad guy even while you want the heroes to win.

The direction from Stephen Sommers is competent. He's not a great director, as later attempts at film making (such as the abominable Van Helsing) have proven, but Sommers is clearly imaginative, and when he's having fun the movie gets a light, breezy feel that helps to move you along without forcing you to think about how ludicrous everything is.

Certainly The Mummy is not a great flick, but it is fun, silly popcorn, and you won't easily forgot about it like so many other adventure flicks that hit the silver screen.