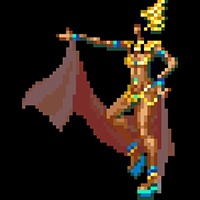 While there are many monsters of myth and legend in the Castlevania series -- the sources of creatures and monsters are great for adding additional mythic flair to any bestiary -- there are far fewer appearances of actual gods in the series. Yes, some ancient gods, such as Adrammelech, were later repurposed as demons in the Judeo-Christian traditions, but actual, famous gods don't show up too much in the series at all.

Astarte is one of the rare exceptions. Although she might not be "famous" under her Egyptian name, she's much more well known to the casual mythology fan going by her Sumerian name, Ishtar (and also Inanna). The goddess of love and fertility, she's a parallel for the Greek goddesses of Aphrodite (Roman goddess Venus) and Demeter (Ceres), although the story of her going into the Underworld, only to lose her husband for half the year (thus setting up the cycle of the seasons) can be seen as a parallel to that of Persephone (Proserpina). Interestingly, despite the fact that Astarte is her Hellenistic name, that's also the name she goes by in Egypt.

Not that much of that mythology carries over to Astarte in her first appearance in Castlevania, as the guardian of the pyramid in Sandy Grave in Portrait of Ruin. The guardian of that temple, Astarte awaits our heroes, Johnathan Morris and Charlotte Aulin. When they encounter her she immediately attacks, trying regularly to lure Johnathan to her will with temptations of love. That tracks with her basic standing as a parallel to Aphrodite, but it doesn't really carry over anything else about her story.

That said, the Castlevania series doesn't really have much time to mythology for any of its monsters outside of the main guy, Dracula. While getting into the deep mythology around Ishtar/Astarte could be neat, not many people know or care who she is. They needed a love monster for the top of a Egyptian pyramid, and Astarte fit the bill. 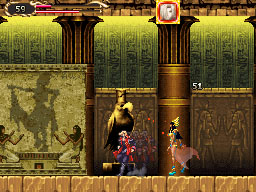 Lurking at the top of the pyramid in Sandy Grave (a level constructed in the shape of a pyramid, a very nice touch), Astarte can prove to be a fairly difficult fight if you aren't prepared. Many an unsuspecting player has come into her chamber with Johnathan in the lead (or even just out to aid in battle) only to have him come under the spell of the love goddess, watching as he attacks Charlotte, leading to a loss and restart back at the last save room. This move, Temptation, is Astarte's scariest move.

That said, you can't just rely on Charlotte alone as Astarte is coded such that all of Charlotte's attacks are nullified. Instead, you'll have to switch back and forth between Charlotte and Johnathan, pulling John back out of battle any time Astarte telegraphs her temptation move as Charlotte is immune to the attacks effects. Bear in mind, though, that Temptation isn't the only thing Astarte can do. She also can jump towards the heroes and lash out with her "scarf blade". She can pull out her rod and shoot a tornado across the room, dealing a wide cone of damage (forcing the player to either slide under the rod or jump over Astarte before the tornado comes out. And she will sometimes jump back and shoot out magical triangles where she just was, forcing the heroes to back off from the monster.

In her second (and so far final) appearance in the series, Castlevania: Harmony of Despair, Astarte's moves remain largely the same. She can tempt any of the male characters, for a limited time, while also lashing out with all her attacks. Note that in Hard Mode, Astarte's moves are greatly buffed such that she can even one-hit-kill a hero if they're caught by one of her attacks.