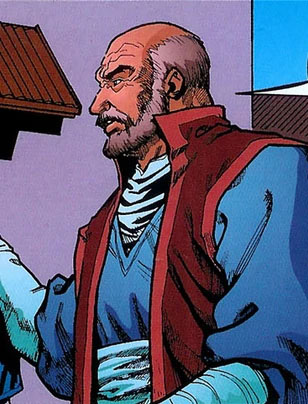 There was a time for a while where many of the fans of the series wondered just where the Belmont family gained their powerful whip, the Vampire Killer. It was an artifact that shouldn't have worked, a whip charged to defeat the vampires even though whips aren't a traditional vampire killing tool (although it certainly did look cool). Eventually that story was fleshed out with Castlevania: Lament of Innocence, in which hero Leon Belmont's fiance Sara Trantoul gave up her own life (which, in fairness, she was dying of vampirism) to super-charge his Alchemy Whip, making it into the powerful weapon we all now know.

But what happens to that whip when its not in use. Do the Belmonts carry it around all the time, wearing it like those idiots that open carry in Subway? The general though is yes, they do, always practicing with the whip if the vampires ever come again. However the 2005 comic series Castlevania: The Belmont Legacy, posited a different answer: there was a clan of protectors who oversaw the whip, maintaining its magic while it was at rest, keeping it at the ready for the Belmonts in times of need.

This group, the Keepers of the Whip, were the Totoyans, a Romani family sworn to aid the Belmonts. Well, okay, the comic never explicity states they were Romani but in their design and manner the implication was clear, and it does make a certain amount of sense. Although the stories round Dracula have stated he gains assistance from the Romani tribes around his lands, more often these groups are depicted as fighting the darkness instead of aiding it (see all the various werewolf stories where the Romani try to prevent the spread of lycnathrope). Who else could watch over the magic of the whip and keep it safe than those whose clan was deeply invested in the magic of the night?

As the eldest member of the Totoyan Clan it was Gaspar's duty to see over the magical whip, the Vampire Killer. This had been his charge for as long as he'd been alive, and was the sacred duty of his family. Although he and his kin always hopd that the whip would never have to be used they perpared, always at the ready should Dracula or his minions rise up once more. They kept the magic of the whip charged while they trained themselves to aid the Belmonts in their fight against the darkness, ever vigilant for when the evil returned.

When Gaspar sense that the evil waws back, that Dracula had been resurrected (as it so happened by two willing cultists, Ivan Bartley and his niece Sona Bartley), he knew the time to honor their sacred duty had come. He grabbed the holy whip and, assisted by his two grandchildren, Pascha and Viktor, Gaspar went to the Belmont lands to find the Lord of the domain, Christopher Belmont, and get them ready for battle.

Christopher had already been preparing, getting a group of men together to fight the evil of Dracula. Gasper handed over the sacred whip and then agreed to join the troup heading out to Dracula's lands. Pascha, too, went along but the younger Viktor was told to stay behind for his own safety. Left in the charge of Christopher's wife, Illyana, it was assumed that Viktor would be safe while the adults went off to fight evil. Unfortunately, Dracula knew exactly how to demoralize people, striking at their weaknesses, so while Gasper and the rest of the group were out in Dracula's lands, Dracula visited Illyana, stealing he away after killing young Viktor, turning the lad into a vampire.

After learning of Illyana's capture, Christopher and his band went back to the Belmont estate to regroup. There Gaspar was confronted by the horrible sight of young Viktor, now a vampire. He pushed the rest of the men away while he confronted his undead grandson, saddened by what he saw. He let the boy bite him so he could get cose, staking Viktor and freeing his soul. However, instead of then staking himself he realized that he felt connected to Dracula, that the magic of the master vampire was shared. Using this, he was able to lead the band back into Dracula's lands, heading to the secret crypt where Illyana was being kept by the vampire.

Sadly at this point Gaspar then turned and, as his only kin left, it fell to Pascha to kill her grandfather, staking him to free his soul from the tainted body. This pained her greatly, but her grandfather had done his duty, aiding the Belmonts one last time by leading them to Dracula, ensuring the vampires defeat in this time.