Although not the biggest commercial success when it first game out, Castlevania: Symphony of the Night eventually grew to be one of the biggest games in the entire Castlevania series. By the time game play sequel Castlevania: Circle of the Moon came out, that game ended up being a million-seller and proving just how big and important the Metroidvania genre was to Castlevania. Just about every game after that drew at least some inspiration from IGA's PlayStation opus, finding ways to iterate and evolve on what that ground breaking title was able to do.

Often considered the closest follow up in style and tone, Castlevania: Aria of Sorrow shared one other trait with Symphony: it didn't sell all that well in its home country. It did perform better here in the States, but its numbers never got close to the "million sold" status Konami wanted. Still, among many in the fan community, Aria is considered the best of the GBA games (and it did get a second chance to be a big sell with its iterative sequel, Dawn of Sorrow).

There are fans, though, that wished the series had done more with Aria, to make it as deep and fascinating of a game as Symphony. There are hacks to add all kinds of features to the game, and we even reviewed one stellar one, the "master quest" edition of the game Castlevania: Aria of Sorrow Alter, while here we have another attempt at crafting an extended experience for the game: Castlevania: Yuutsuki no Minuet. Essentially, this game makes a "Inverted Castle" out of Aria (the name for the hack roughly translates as the inverse of the original game's title), and so everything in the game is flipped 180 degrees to give that proper Symphony second castle experience.

In concept I rather like what the designer, ikusatatsu_ushiromiya, had in mind. The Inverted Castle was one of the coolest things about Symphony. You just completed the main castle, explored everywhere, and reached what you think is the final boss, defeating them and saving the day... only to then find out there's a second castle you have to explore and the game is literally twice as big as you could have imagined. It's absolutely bonkers and the kind of thing that showed just how far IGA and his team were willing to go for this passion project. Doing something similar for Aria of Sorrow feels like a great idea... in theory. 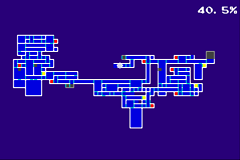 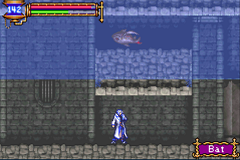 The Sticking point here is that this game doesn't add a second castle onto the first. There's no fully exploring all of the main game, as you remember it, only to open up a second full castle once you hit what would be the portal for the Chaos Realm. Instead, the game immediately drops you right into the Inverted Castle, grafting the original game's story onto this new version of the castle. And this is a problem because, as weak and pathetic Soma Cruz, you aren't really ready to explore an inverted version of the castle right from the get go.

When you reached the Inverted Castle in Symphony, Alucard was already pretty powerful. He could fly, he could do massive high jumps, and he was loaded for bear. Soma, meanwhile, starts armed with a knife and barely any souls or powers, so the whole experience is different. Adventuring through an castle that wasn't meant to be flipped 180 degrees is more frustrating than interesting because you have to earn each of your power-ups, one at a time, as you explore the castle. Where it was a point of freedom, the game opening up for you to freely explore and enjoy your powers in Symphony, exploring this inverted version of Aria is an absolute chore.

There are ways this could have been alleviated. The designer could have given Soma any of the maneuvering souls so he could double jump or high jump or fly. These would have made navigating a lot easier and would have gone some way towards improving the experience. Instead, you're stuck following the same story path through the game, getting the same power-ups in the same locations, all while struggling through a castle that is much harder than it used to be.

That's the other big change ikusatatsu_ushiromiya made: they upped the difficulty of the game. Soma starts with a lot less health than in the original game, and even by the end you'll still have barely 400 or so HP (at a point where you'd originally have 1200 or more), fighting bosses designed to punish you even with a massive armory and tons of health. Beyond that, though, there are a ton more enemies in every hall, and many of the bosses have nasty twists added to them, like extra enemies in their rooms (enemies that are often more difficult than the original boss), or sometimes even two versions of the boss to fight at once. It gets pretty ridiculous. 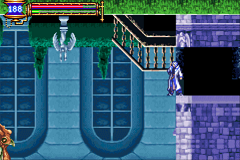 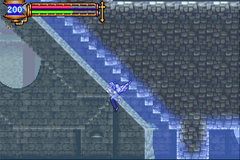 The designer specific states that they added more enemies to up the challenge, and I think if Soma's health had been kept at normal progression and there were weapons scattered around to make the experience more palatable, it would have been okay. Maybe even fun. But I spent a good third of the game with just a combat knife as my primary weapon as nothing else good would drop from enemies and all the better swords that originally were scattered around the castle were removed or hidden in places I couldn't access until the late game. That, coupled with the ridiculous boss fights and so many other enemies just packed in everywhere, made this inverted mode into an absolute chore.

Frankly, by the end game, this hack no longer felt like slight difficulty increase, but was verging straight into "kaizo" levels of malevolence. And that doesn't even get into some of the loading issues I saw, hallways that seemed like they wanted to crash because of too many enemies loading in, backgrounds that weren't seamed right and often had tearing, and any number of other minor glitches that pulled me out of the play experience and left me wanting more from the hack.

I like the concept of an inverted castle for Aria of Sorrow, something more expansive than the last little Chaos Realm included in the original game. It's just that the execution here in Castlevania: Yuutsuki no Minuet leaves me wanting. There's a grain of a good idea here, I just wish the creator had wanted us to have fun instead of simply having fun at our expense.