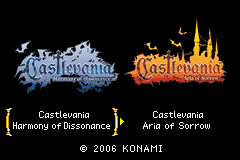 After the releases of Castlevania: Harmony of Dissonance and Castlevania: Aria of Sorrow Konami was, frankly, disappointed with the results. They'd brought back Castlevania visionary Koji "IGA" Igarashi, the man that helped create Castlevania: Symphony of the Night, and while that game hadn't initially been a success, good word of mouth had helped the game gain worldwide traction. With him at the helm, and after the solid success of the first Castlevania outing on the Game Boy Advance, Castlevania: Circle of the Moon, sales should have been brisk. They were middling at best.

As a way to recoup the money they'd invested in the games and try to eek a little more profit from the two GBA games, the company put out the Castlevania Double Pack, a two games-in-one collection that united Harmony of Dissonance and Aria of Sorrow under a single cartridge. Notable absent was Circle of the Moon, which would have united all three games on the system together, but that was probably due to the cost for a larger cartridge as well as the fact that IGA wasn't a huge fan of that game (for which he'd had no artistic input).

As far as deals for the customer, it was hard to argue with the value proposition of the Double Pack. Aria of Sorrow was a great game upon its release and has only gotten better over the years and players go back, again and again, and revisit the charming adventure of Soma Cruz. Harmony of Dissonance... well, the comparison between the two games doesn't do Harmony any favors, that's for sure.

A fair way to look at Harmony is that it was the first GBA Castlevania designed by IGA's team. Given a little over a year to crank the game out after the success of Circle of the Moon, and no reusing anything from that game (as, again, that was a title developed by a different team, KCEK, without IGA's formal involvement), Harmony could be viewed as a pilot effort to translate the superior game play of Symphony of the Night to a GBA cartridge. Growing pains should have been expected.

Harmony of Sorrow does feel clunky. It's weird looking, for starters, with graphics that were designed to look bright and, well, legible on a GBA without back-lit screens (as that wasn't a standard part of the hardware back when the game was originally released). Fans have complained that the graphics in Circle of the Moon were hard to see so IGA's team went far in the other direction, creating a game that was so "legible" that it actually lost that moody, Gothic feel of past Castlevania games, trading that out for bright (often pastel) colors. But you could sure see what you're doing.

As far as game play was concerned, Harmony desperately wanted to be Symphony of the Night. If it wasn't outright stolen from that game -- the save room graphics, the two-castle conceit, the collecting of Dracula's body parts -- then it at least felt like a slow progression from that game. It doesn't feel like Harmony evolves the Symphony of the Night Metroidvania formula but simply iterates on it. That spark that makes the game feel essential is missing.

That isn't a flaw of Aria of Sorrow. This game absolutely feels like IGA's mulligan, a "third time's the charm" for Castlevania on the GBA and, honestly, the team nailed it. This is a clear evolution of the exploration-adventure formula IGA was perfecting, and this time it works oh so well. The castle regains some of that 'othic charm (while still being more legible than Circle of the Moon, while shaving away all the clunky edges of Harmony of Dissonance.

The big mechanic is the Soul collecting, and that one twist -- as Soma ventures through the castle, beating enemies and taking their souls to gain special powers -- adds so much to the core mechanics of the series. It made the grind of the RPG elements fun and it constantly added new abilities, new mechanics to the core game play. Aria of Sorrow feels like a true expansion of the Metroidvania formula, despite it lacking a second castle to explore, and fans loved every second of it. There's a reason this game often sits near the top of "best of" lists for the series. 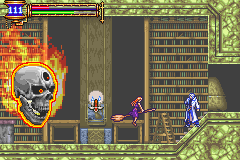 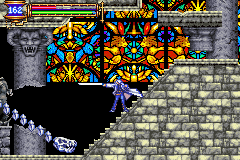 The Double Pack itself gets all its value from having both these games together (for the first time). Outside of that value proposition, though, the cartridge is pretty bare bones. The only change the company made to the games was to put a loading screen in front of them so you could choose which game you were playing. Beyond that it's these two games and nothing more. Certainly, for a GBA title, just having both together felt like enough but, years later, going back to the Double Pack its hard to not want more. Maybe just a little gallery, or a cross-game sound test, or something. The two games are siloed away from each other, with only a game select screen to unite them, and that's it.

This little cart is an oddity at this point. Most collectors want to have both games on their own and with other collections, like the Castlevania Advance Collection, the value proposition of this title is greatly diminished. If you didn't get the Castlevania Double Pack at the time of its release there's little reason to track it down now. At this point the cart is only for the hardcore collectors who simply have to have everything.