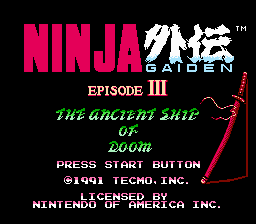 Once a franchise was established, it had to be perpetuated. Kids would buy anything back in the days of the NES if it was cool looking enough, and in the 1980s nothing was cooler than ninjas. Of course, the Ninja Gaiden series had a reputation, even early on: it was absolutely, controller-wrecking tough, with most kids back in the day never getting through the (relatively short) game. And yet, because it was cool looking -- with solid graphics and a great soundtrack -- kids bought it, then bought the sequel.

Eventually, as with the Castlevania series, a third entry in the Ninja Gaiden run was called for. Titled, naturally, Ninja Gaiden III: The Ancient Ship of Doom in the U.S. (Ninja Ryikenden III: Yomi no Hakobune in Japan, translated as "Legend of the Ninja Dragon Sword III: The Ark from Hades"), this game hewed close to the basics of the series that fans knew and (probably) loved. You had series hero Ryu thrashing his way, by sword and ninja powers, through endless hordes of enemies as so he could take on the monsters that lurked at the end of his mission. He swipe, slash, and leap off walls all to get there, hopefully surviving long enough to complete the mission (although if you were anything like us, you never got farther than the third level, and even that was iffy).

This third game in the series makes some curious changes to the formula from Ninja Gaiden II. For starters, the shadow clones that you could collect in the first sequel, and which added not only flair but also a distinctive mechanic to the game, are missing here. That could be explained by this game actually being an interquel, technically taking place between games one and two, so maybe Ryu hadn't learned to summon shadow clones just yet.

And yet, at the same time, he picks up new tricks (that then aren't seen in the second game): he can now climb up and down walls, instead of just kick-flipping off of them, and he can each grab onto under-hangs, climb along them, and climb up to the top of those areas. It gives the ninja a lot of maneuverability that help his mission, substantially. Why these features are then missing from his "later" adventure isn't explain canonically, but they are welcome inclusions here. 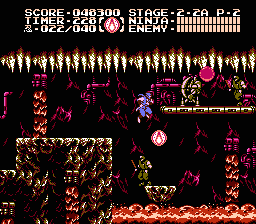 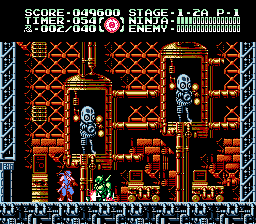 The other big diversion is away from the demonic and fantastic stylings of the previous games. Here the enemies have a much stronger sci-fi bent, with Ryu often taking on mechanics armors and the like on his path to glory. This change is also curious, although probably explained as Tecmo following the trends of other games, with plenty of mech-games having been released on the NES in the era and the game company was just following suit. That said, as silly as it might be to have a ninja fight a mech (at least if you think about it), the fact is that the change is pretty subtle and the art-style of the series still remains largely on brand.

All in all, this third iteration of the Ninja Gaiden series was a surprisingly safe and staid entry in the franchise. The new mechanics added to extend the game play some but they don't overly change things that much. It's still the same run-and slash game play, the same super-hard difficulty (especially once you get into the back half of the game). Everything kids loved about the first two titles is in here as well, but there's very little that's truly new to set it apart. It's just another title in the series, one that was already starting to grow just a little stale only three titles in.

As with the previous games, the biggest connection between Ninja Gaiden and Castlevania is in its power-up system. There, the heroes collected hearts to act as ammo for their sub-weapons (activated by pressing Up+B). Here, the hero collects ninpo, ninja magic, to power his ninja skills (which he casts by pressing Up+B). Mechanically there's not that much difference in the two basic functions.

If anything, Ryu plays even more like a Castlevania hero this time around. Namely he seems directly inspired by Grant, who was featured in Castlevania III two years prior (in Japan, at least). Previous Ninja Gaiden games side-stepped the comparison by making Ryu's clingy abilities limited -- he could attach to walls but had to jump off them, giving him an very aerial feel. Now, though, he can grab hold and climb along, making him very much a hero in the mold of Grant. 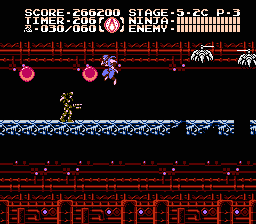 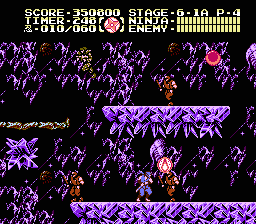 Oh, and now as Ryu explores he can find power-ups that extend the power and reach of his swords, almost a one-to-one idea take directly from Castlevania. It really feels this time like the designers looked long and hard at Castlevania and said, "yeah, we can do that." Then they just borrowed the best bits from the best NES game in the series and ran with it.

But then they tried to underplay it by shifting from a magical, demon-infested setting to something more sci-fi inspired. We see what you tried to do there, Tecmo, and we aren't buying it. It's pretty clear where your inspirations came from, there's no hiding it now. And yet, despite obviously seeing what Castlevania III had to offer, you didn't take the main lesson: you have to evolve the game play. This third title is very much in the vein of Ninja Gaiden without anything revolutionary. It's exactly what the name says on the package: Ninja Gaiden for all the good and bad that implied.