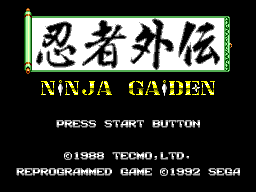 For a few years there, Ninja Gaiden was one of those series that felt ever present. It had three NES games, a Game Boy iteration, plus entries on Sega consoles for the Game Gear and the Master System. Counting the eventual Ninja Gaiden Trilogy on the SNES (which was just a compilation of the three NES titles with slightly improved graphics, like a Ninja Gaiden All-Stars), and the barely related arcade game, that's eight titles in just a handful of years.

And then, for whatever reason, the series just stopped. There's little explanation for it, really, as fans of the series still seemed to hunger for the games. Tecmo would eventually release further adventures in the series after over a decade away, and the company existed as an entity for years until finally merging with Koei, finally taken over with the original company all but eliminated by 2010. Still, though, why did the Ninja Gaiden series disappear?

Certainly it wasn't because of this game. While it's hard to consider the Sega Master System entry in the series to be a high point, it's a perfect competent and, from all reports, well-liked entry in the series. Heck, it wasn't even developed by Tecmo, instead behind handled (as with the Game Gear title) but Sega and their second-party studios; all Tecmo had to do was collect a paycheck for licensing and profits. Who knows why it worked out this way, but Ninja Gaiden SMS would prove to be the last true entry in the classic series. Even when it returned, the series would be very different.

I don't think any fan would want to view the Master System game as the last word on the classic series. It's certainly not a great capper, that's for sure. While SIMS and Sega were able to get the basic bones of the series right this time around (certainly more so than the undercooked Game Gear title). Ryu runs, jumps, clings to walls, can ledge grab, and has all the spells you expect from our balls-to-the-walls ninja. Whatever else you might want to say about this title, Ryu plays just as you'd expect and has the right feel to his character. 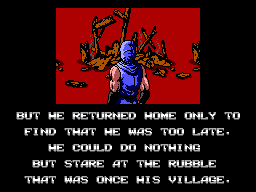 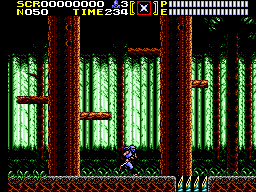 It's in the rest of the title that Ninja Gaiden stumbles a bit, at least for fans of the NES titles. There's something just... off about this entry. The levels feel flatter, with less back and forth bouncing, less of the trademark jumps and rebound that gave the platforming such a specific and identifiable feel in the original trilogy of games. Ryu may have all his abilities here but he doesn't need to use them to get through stages like was required in the original titles.

Meanwhile, the enemies as much more spread out and easier to deal with. For someone that sucked at the original games this certainly felt much nicer; I could get through stages and make it easily through the main meat of the game. That's great for beginning players but that's not how Ninja Gaiden should work. These games should make you feel the burn, make you work for it, but the difficulty in the game doesn't crank up until near the end, and even then only by a bit.

In short this game feels more sedate, more methodical. If you only had Sega systems and never got to play one of the NES games, that's probably fine. Certainly this title had all the basic action of the series with a fully maneuverable hero. It looks like the NES games and plays like a decent copy of them. It's just not quite right. That Tecmo magic, that essential energy that made the original trilogy such winners, is missing here. It's a copy of a copy and it shows when you really look at it.

At the same time, though, Sega fans seemed perfectly happy because this was the best Ninja Gaiden game they'd get. It was smooth, fun enough, and looked the part. Reviews of the game were favorable and from all reports it sold well enough for Sega to plat another licensed entry in the series (a Genesis/Mega Drive title that was eventually scrapped). That leaves this game as the effective capper on the series. Tecmo gave up on the titles for 14 years and this game has to bear that weight. If it had just been another entry in the series before Ryu went on to a Ninja Gaiden IV on the NES or SNES that would have been fine. As the last word for the series, though, it just doesn't hold up. 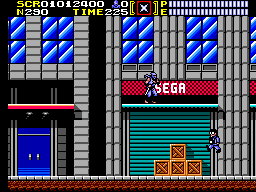 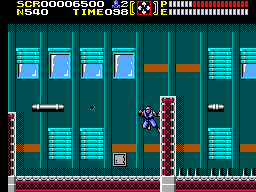 SO it all depends, really, on what you want from your games. Do you want something manageable and decent, or do you want something that can stand with the tops of the series but has hard-as-nails difficulty. For many gamers it was the latter they were looking for from the series and it would be many years, and a reinvention of the play style, before Ninja Gaiden would properly return.

As with the Game Gear entry its hard to say that this game owed much to Castlevania or presaged anything the other series would eventually do. This was a licensed copy of the game made for Sega and it shows the seams of that conversion. I doubt Konami paid any attention to this title, nor did Sega and SIMS think about the roots of video gaming when they made their Ninja Gaiden clone.

The one thing this game did prove was that Sega fans were craving the titles that Nintendo fans got to enjoy for years. In that regard, Ninja Gaiden did point the way for Castlevania; eventually, Konami would publish Castlevania Bloodlines on the Genesis two years later. Konami skipped the Master System, which makes sense since that console was losing the war, badly, against Nintendo's NES.

And then, finally, one other thing this game showed was that game companies could license out their IP to other studios and let them make games to sell. Konami would eventually learn that lesson much later with all their (generally not great) mobile games created by other studios just to bank on the Castlevania IP.