Castlevania: Dawn of Sorrow for Cellphones 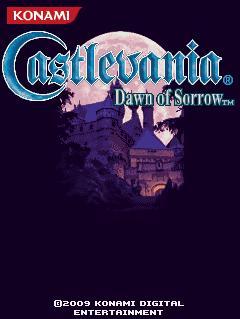 Converting a game was one system to another can be a dicey proposition. We've seen any number of conversions of the original Castlevania (on the Amiga, the Commodore 64, as Vampire Killer on the MSX, as the quarter-stealing Vs. Castlevania in arcades), and while each of them tried for their own version of fidelity they each had to be crafted to the needs, and power, of the hardware, often times leading to a compromised experience. A port of a game has to be carefully crafted if its going to work at all, best illustrated by the failure of the port of Castlevania: Aria of Sorrow for cellphones.

As we covered in that review, Aria on cellphones was a compromised experience. It desperately wanted to present the whole game, or at least the appearance of the whole game, as it was on the Gameboy Advance, but too many compromises had to be made (the exclusion of animations, sounds, and whole areas) that left the game feeling half-baked at best. That was a game that really needed a solid rethink before it was put out into the world on the "lesser" cellphone medium. While production company Glu Mobile, Inc. should be credited for the attempt, we really wish they'd taken time to consider what they were doing.

And then did, eventually, just not for Aria of Sorrow. Instead, with their next port, sequel Castlevania: Dawn of Sorrow, Glu went back to the drawing board and clearly spent a lot more time working to best fit the original Nintendo DS masterpiece to the media at hand. This leads to a game that is a much better fit for cellphones, still compromised, yes, but worth at least playing for a little while to see all the things the game actually does well.

Comparing this game to the Aria of Sorrow port is like night and day. Where that game clearly lost the thread of what it was doing and had to be rushed out at a certain point to be "complete", Dawn of Sorrow shows more care and thought. That's obvious from the first area, the Lost Village that starts both versions of the game. The music is lush, the graphics detailed, and hero Soma Cruz animates fluidly. If you have the volume off, there are times where you might even mistake this game for the real deal as it looks and plays (at least to an onlooker) just like you'd expect. 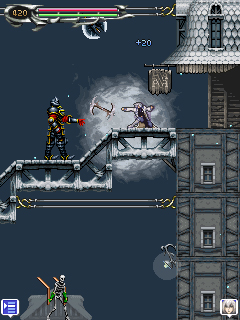 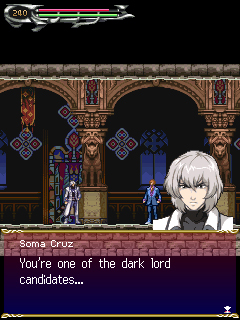 That's not to say the game is perfect, mind you. As with Aria, a number of compromises had to be made. You'll note that we said "with the volume off" and that's because, as with the previous port, Glu has not implemented any sound effects in this game. While Soma, and all the enemies look right and animate fluidly, there's absolutely no sound effects in the game. This makes the game feel oddly airy, lacking the right weight for Soma's actions. It's not the worst compromise, mind you, but it is a flaw I was never able to shake off.

The menus and story sections of the game look better this time around, with the characters having actual, proper (written) dialogue, complete with portraits of each character, just like in the original. The inventory system is here, too, and the menus for it are crisp and detailed. Again, it's all just like you'd think it should look, so long as you don't dig in too deep. This feels like Dawn of Sorrow at first blush.

That said, while the inventory system is here, it's vastly stripped down. There's only a small selection of weapons (three each of the four types) and armor (again, three each of four). You'll spend a lot of time walking back and forth through the halls of the game swinging your own piddly weapon, making anything new you collect feel like a massive improvement, sure, but when you'd get weapons regularly in the GBA game, being stuck for an hour-plus with a piddly short sword feels awful.

Also, expect to use the one soul you start with, the overhand axe, for a long time because the soul selection in the game is skimpy. It's amazing to think that a game originally built around the collection of souls would have so few on offer, but like with the weapons and armor, there's a paltry selection for each of the soul groups you can earn. The way the game makes this function is that enemy groups share a soul, so if you kill one type of skeleton and another shows up later, they'll have the same soul to collect. To "balance" this, souls are harder to get, so you'll probably spend as long working to get souls as in the GBA game, you'll just have less to show for it. 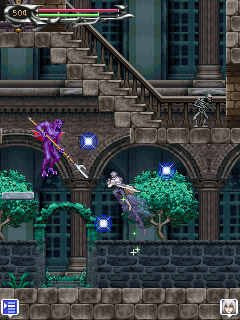 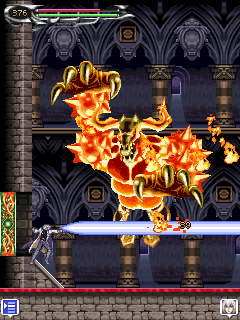 Benefiting the game, though, is that all of the areas have been reworked for the layout, and hardware limitations, of the cellphone screen. There are plenty of vertical passages crafted to the nature of the screen, and most areas of the game have a completely different layout from the GBA counterpart. The overall castle is smaller, yes, but here that doesn't feel like a big deal because this is a new castle (and not just a copy as in Aria) so the exploration and adventure of it feels new and fresh while extending the game time.

Overall I like what Glu tried to do here. I do wish there was a little more to collect in the game, more weapons and armor and souls, a few more things to find, just so the grind feels a little more diverse and fresh in the title. It's a responsive game, especially considering the awful num-pad it had to be played on (as is the norm in phones of the era), and Glu put in a level of care I didn't expect considering their previous port. It's not perfect, and it's probably far from great, but if this was the only version of Castlevania: Dawn of Sorrow I had access to, I probably wouldn't be turn-off. It's a fun for what it is and while inferior to the original it does at least try to serve the experience of the game. I can appreciate that, for what it is.