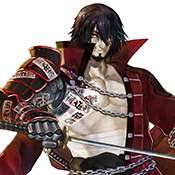 When first announced via Kickstarter, Bloodstained promised Metroidvania action with a cool, female lead -- demon huntress Miriam. However, the Kickstarter took off, becoming over 10x bigger than expected, and along the way a bonus, retro mini-game was unlocked. That game became Bloodstained: Curse of the Moon.

Interestingly, when Curse of the Moon came out, the main character wasn't Miriam (who takes the full lead on Ritual of the Night), but Zangetsu, a sword-wielding demon-hunter. The game revolves around his plot, his quest to remove a curse placed upon him by demons, and an eventual face from grace and redemption arc (of a sort). It's a neat switch up that gives us a different perspective on the series while still, eventually, letting us add Miriam to our nominal party.

Zangetsu was a skilled sword fighter from (an indeterminate country in) the East. Years before the events of Curse of the Moon, he was attacked by demons one night and given a horrible curse. Swearing vengeance, he took off to find all the demons and kill them, riding the world of their evil and (hopefully) his own curse.

Leaving the East, his journey eventually took him to England and the outer ground of the castle of the demon Gremory. Taking a demoniacally possessed train deeper into the grounds (because why wouldn't you?), Zangetsu had to do battle with the evil train engine, eventually defeating the beast and rescuing the first of three heroes who joined his cause: Miriam, the demon huntress. As the two ventured further into the castle grounds they rescued the alchemist Alfred and the demon-hunter Gebel. Together, the ventured deep into the demon castle and confronted Gremory, defeating the foul demon king. 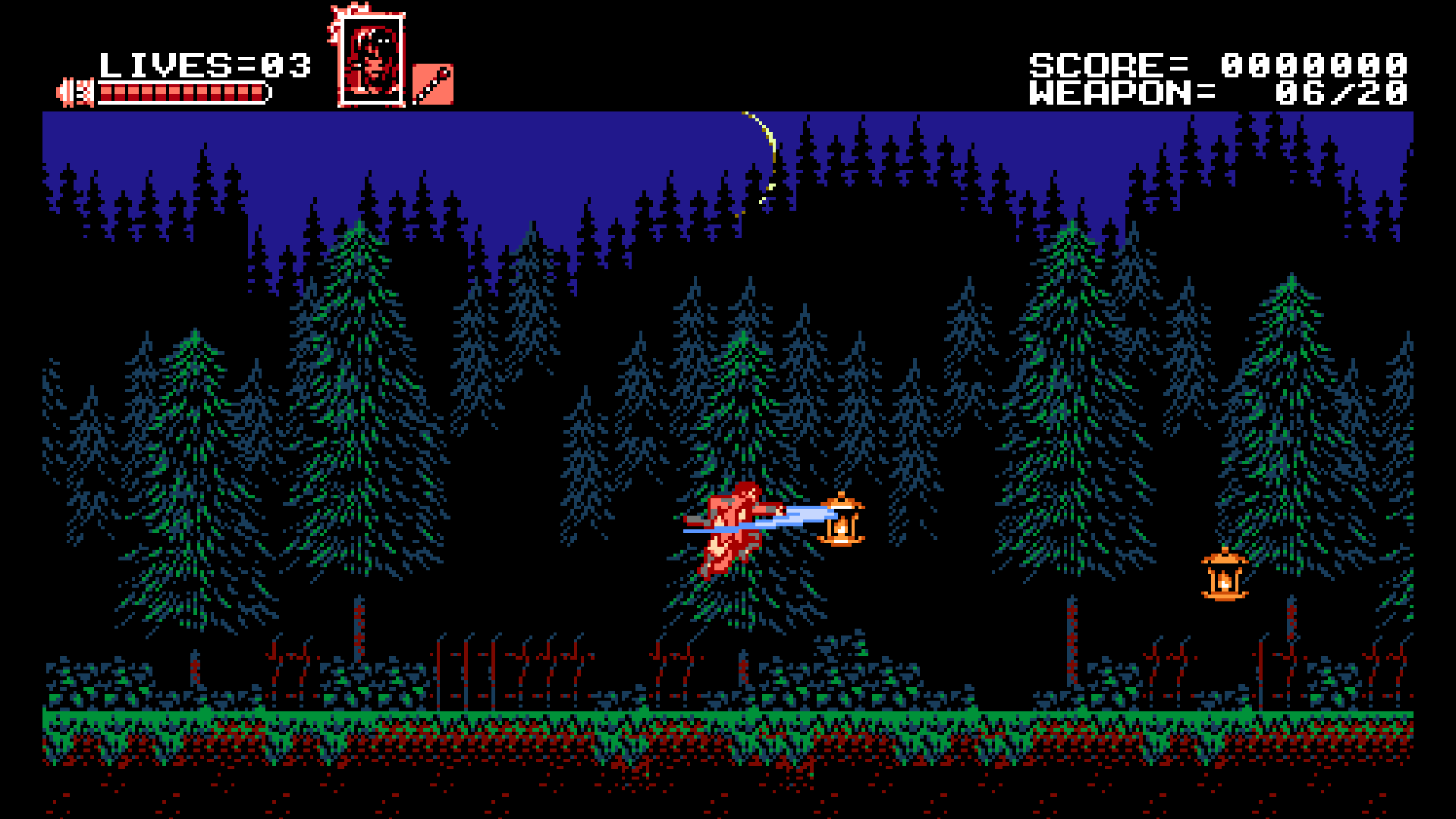 Unfortunately for Zangetsu, the dark magic unleashed from the demon's death proved too great a lure for his cursed soul, and the demon hunter took the magic into himself, turning him into the hellish Emperor of Darkness. His partners fled, leaving him to be consumed by the dark energy, allowing him to make his own, new, hell-like realm.

His fate was not sealed, though, for the rest of the party came back to the castle, ready to fight for Zangetsu's life. At the end of his hellish realm, the rest of the heroes confront Zangetsu as he sits upon his throne. He stuns two of them with his dark magic, leaving only Miriam to do battle. She fought hard (with the occasional assistance from the other two heroes when the magic holding them waned), until Zangetsu was weakened. Then, Alfred cast a sealing spell binding the dark magic away. This killed Zangetsu's body but freed his soul, sending it on to the afterlife.

Although the official storyline for Zangetsu sees him join up with the other heroes only to then get overwhelmed by the demonic forces at the top of the castle, an alternate way to play the game sees Zangetsu kill all his team mates (instead of joining with them), stealing their powers for his own. In the end, after defeating the demons, he takes their dark power into himself and becomes the Emperor of Darkness. Understandably, since the rest of the team dies in this version but are all alive for the next game in the series, this version of events is not cannon.

In the official ending, after the credits roll, Zangetsu wakes up in a realm that looks not entirely unlike the opening sequel from Mega Man 2. This is likely a reference to Azure Strike Gunvolt, a very Mega Man-like series by Inti Creates, the production studio behind Curse of the Moon. While a fun Easter Egg, it's not assumed that this part of the ending is official cannon (at least, not until we see reference to it in a future game).

After dying at the end of Curse, Zangetsu eventually somehow returned to the realm of man (maybe after fighting his way through Mega Man 2. When he returned he found a land once more plunged into darkness. Somehow he ended up working with the church, using their knowledge and power to get him into places he couldn't easily venture into alone. He was assigned a handler, Dominique Baldwin, who aided him on his journey. And, with the return of Gremory (who, at the time, was possessing Zangetsu's one-time ally, Gebel), the demon hunter knew exactly where he needed to go.

Venturing deep into the demon castle, Zangetsu was in search of some way to gain access to the final sections of the castle and take on the foul demon Gremory. However, he soon realized that his power alone wasn't enough to take out the demon; another was needed. Encountering the shard-infused demon huntress Miriam, Zangetsu saw a power within her that could potentially take on the demons. However, as she was infused with the shards, Zangetsu wasn't initially able to trust her, assuming she was just a pawn for the demons and would quickly fall to evil. He did test her though and, over time, assumed she'd reveal her true self.

Thus it was, much later into his own journey, having explored every other section of the castle he could access, Zangetsu teamed up with Miriam to take on a demonic train. He needed her abilities to access some sections of the train and, together, they had the power to take out the demon at the head of the vehicle. Seeing her in action, Zangetsu began to get a better feel for her Miriam really was and, despite his misgivings, he realized he could actually trust her.

It was during their final encounter that Zangetsu truly found a equal he could trust with his power. He tested her one last time, throwing everything he had at her, to make sure that Miriam was up to the challenge of defeating Gremory. When he knew she was ready, he ceased the fight and gave her his powerful sword. With the blade in hand, Miriam would be able to defeat Gremory once and for all. Sadly, passing off the blade weakened Zangetsu and, immediately after, Gremory arrived and sucked Zangetsu into a demonic realm where, presumably, he died once more.

Although Zangetsu and Miriam fought together in Curse of the Moon, neither of them recognize the other. It's possible that he journey through the demon realm wiped many of his memories but that doesn't really explain why Miriam doesn't recognize him. Playing the game, we expected Miriam to jump for joy at seeing her old ally, but instead we get nothing. It's a curious omission, a continuity issue we hope will be addressed in a future game.

And speaking of that, please, Iga, give us a Zangetsu follow-up adventure where he battles his way out of the demon realm. At this point it seems like he's earned it. 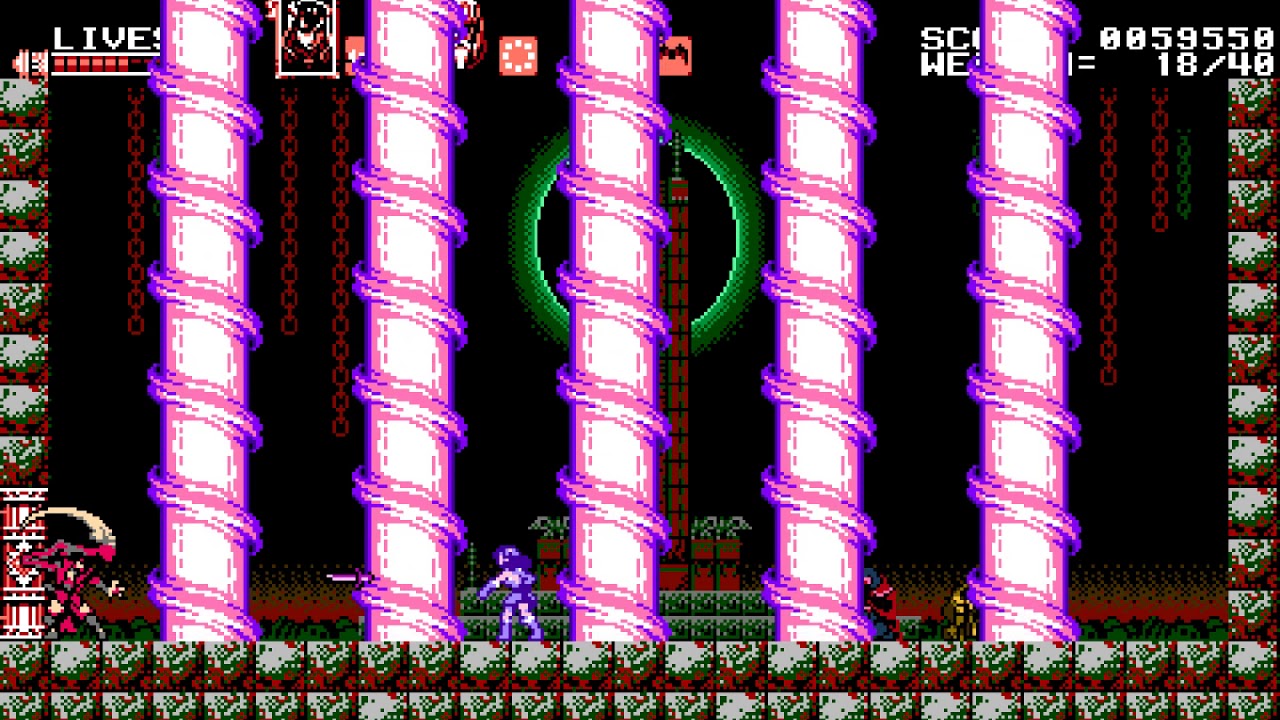 Really, as a sword-wielder with demonic powers (activated via scrolls), the best analogue for Zangetsu is Getsu Fuma, star of Getsu Fuma Den (a Castlevania-adjacent series by Konami), a demon-hunting sword-wielder who travels through Hell. Zangetsu has a name similar to Getsu, and his stage (as a villain) is even very Hell-like, much like the setting for Getsu Fuma's game.

Within the context of Curse of the Moon, Zangetsu is a very middle-of-the-road character. While he's as strong as Miriam, his sword doesn't have the length of her whip, nor are his sub-weapon scrolls as outwardly useful. He also doesn't have the overall power of, say, Alfred, nor is he as good at exploration as Miriam (with her extra jump height) or Gebel (with his ability to turn into a bat to fly around). He can, however, take more damage than Alfred or Gebel, and his base attack is more powerful. He's useful has a backup to Miriam if she takes too much damage and/or dies.

In a nice nod towards the Castlevania series, the lead up into Zangetsu's final chamber sees the player descend a long staircase, not unlike the long staircases players would traditionally climb upwards into Dracula's Keep.

As a villain, Zangetsu was less of a Dracula from Castlevania (although he does have a spiffy throne in his hell dimension, and he does get to throw his goblet to the ground like Lord Tepes) than the Grim Reaper. Once you initiate battle, Zangetsu's sword grows into a giant scythe and he starts flying around the room, slashing at you and throwing huge, magical blasts. He's a quick warrior, able to cause successive hits of damage to unsuspecting players. Taking him down will require quick wits and good memorization, but even then expect to take a ton of damage before it's all said and done.

Players will also have to battle Zangetsu twice in Ritual of the Night. Both battles operate largely the same with Zangetsu using similar moves against the player. His primary attack is his sword slash which he'll use if you get close. He'll also do a jumping slash as well as a dashing slash, both of which deal a lot of damage to Miriam. Plus, he can throw out a grappling hook to try and grab Miriam (so he can then slash her), and he has shurikens to throw at her as well. For the first foray, the player's best bet is to stay in close and jump behind Zangetsu each time he attacks -- he'll take a pause after his attacks, giving the player a window to strike.

As noted, his second battle is much like his first except for the fact that he deals a ton more damage (but, since it comes much later in the game, that makes sense). Although his attacks are nominally the same, he will also rotate through most of the primary elements of the game (fire, ice, lightning, and darkness) as he takes more and more damage. Many of the elements effects add a twist to his strikes, meaning you have to be prepared for what he throws and the kinds of residual damage it can incur. Still, stick behind him when you can and get your hits in to, eventually, bring the honorable swordsman down.