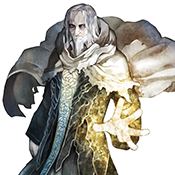 Although everyone was excited for the eventual release of Bloodstained: Ritual of the Night, the project Kickstarted by IGA, the first game to come out was actually the bonus mini-game unlocked during that drive, Curse of the Moon. In Curse, characters and elements from the eventual sequel would be remixed, with characters from the later game showing up as playable heroes in the former.

This is interesting in the case of Alfred as he's something of a villain in the sequel, but in Curse of the Moon, Alfred is one of the heroes standing against the forces of darkness. The Alchemists are not good guys in the Bloodstained series, and Alfred is one of the Alchemists. Alfred's character, then, plays well into the darker atmosphere of Bloodstained, an illustration that maybe there's no clearly defined "good" and "evil" in this setting, no obvious Belmonts and Draculas. Alfred adds shifting morals and shades of grey to the mix.

As one of the oldest of the Alchemists, Alfred was strong with power and magical ability. Unfortunately, he was captured by the demons (demons, apparently, he had a hand in unleashing) and was held as their captive. He was freed only when Zangetsu and Miriam, two demon hunters on a quest to save the world, release Alfred from the sea-turtle demon that held him prisoner. Vowing to aid his new colleagues, Alfred ventured off with the heroes to find the demons responsible for his capture and defeat them. Along the way they also save Gebel, another powerful being with the ability to transform into a bat, making their party four-strong. 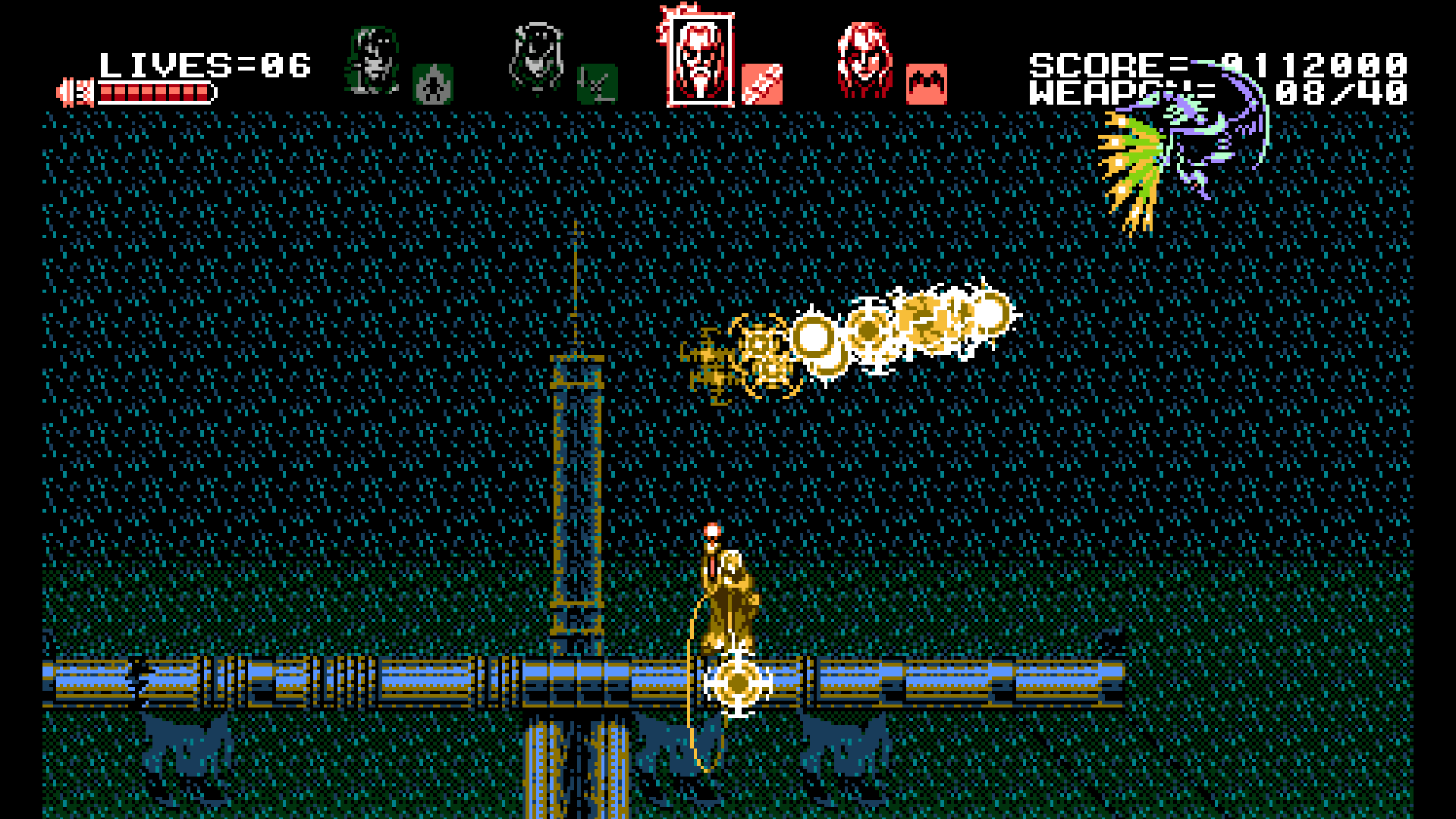 Fighting through the demon castle of the evil lord Gremory, the heroes ascended the castle until they were face to face with the demon itself. A pitched battle up the tower ended with the defeat of Gremory and a release of his dark magic. Unfortunately, Zangetsu, who already had a demonic curse on him from an age prior, was unable to control himself and absorbed the dark magic, becoming the new Emperor of Darkness.

The remaining heroes fled the castle to the outer grounds, regrouping so they could figure out their next move. Recognizing the danger the uncontrollable Zangetsu posed to the world, Alfred encouraged the group to go back in, under Miriam's lead, and fight their way back to castle keep once more so they could release Zangetsu from his curse. The battle proved harder the second time around, the castle more cunning and the enemies stronger, but eventually they reached the castle pinnacle.

Instead of climbing to the top, though, the heroes descended into a hell-like dimension. Each had their own challenge to face, a battle custom built for them, all before they could unlock the final doorway to Zasngetsu's chamber. Descending the final staircase, the came face-to-face with their former ally who lounged on his demonic throne.

The the battle began, with Zangetsu stunning Alfred (and Gebel), forcing them to watch on as Miriam did pitched combat with her foe. Occasionally, though, the magic holding Alfred would let go, allowing him to put up shields to protect Miriam from the devastating attacks Zangetsu unleashed.

Eventually, Miriam had done enough damage that the magic binding Alfred and Gebel fully let go. The alchemist could then begin his work, casting a binding spell that would sever Zangetsu from the dark magic within in and freeing the poor man's soul. Miriam protected Alfred while he worked, and the ritual was performed. This sadly killed Zangetsu, but the heroes left the castle assured that their fallen ally's soul was at least sent off to the afterlife.

This game and it's sequel sort of imply that not all the Alchemists were good people and that many of them might have wanted to raise the demons. It made us wonder why Alfred was captured by demons if he was working for a group that worshiped them but, as eventually was revealed, Alfred at least did not want to see the world plunged into demonic darkness. Whatever some of the other Alchemists may have wanted, Alfred was on the side of good so, long run, this confusion between the games was at least cleared up.

With the demon-filled castle of Gremory defeated, the various surviving heroes went back to their prior lives. For Alfred that meant working with the Alchemists to continue protecting the world from possible demon incursions. Having seen how well Miriam and Gebel fought in their first quest, Alfred agreed to continue the experiments with demon shards, the demonic crystals that gave the two heroes their abilities, to see if they could be further enhanced to make them even more powerful. Unfortunately, most of their "volunteers" did not take to the demon shard fusion process and died. Even those that did show promise with their crystals, such as Gebel, eventually exhibited concerning behaviors. It seemed almost as if Gebel were changing, becoming someone darker... 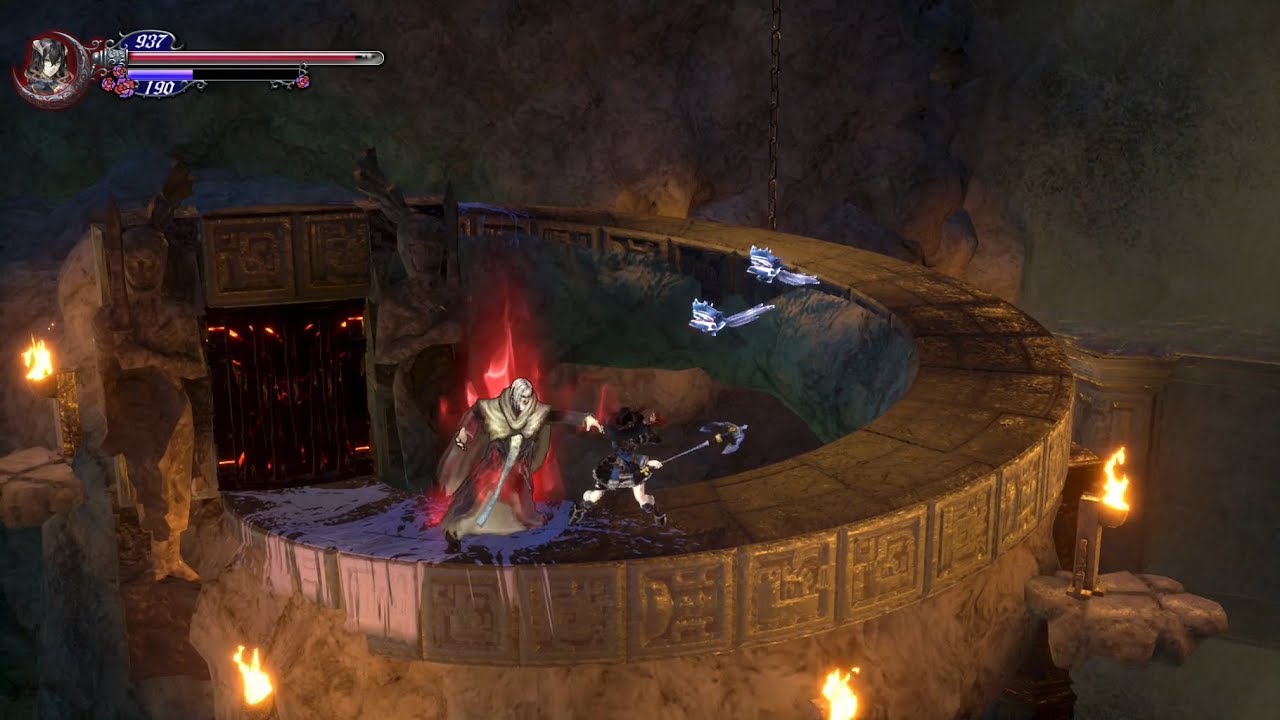 And then, sure enough, Gebel attacked the Alchemists, killing most of the practitioners and stealing their most powerful dark tome, the Book of Logarithm. With this evil volume Gebel would have been able to unleash unspeakable terrors on the world. With the powerful book in had, Gebel summoned Gremory's evil castle once more, plunging the world into darkness.

Knowing there was no other way to stop the evil, Alfred ventured into the castle to find the tome and try to end Gremory's evil. He wasn't the only one to go to the demonic grounds, though, as both Miriam (awoken from a deep slumber after ten years) and Zangetsu (who no one is surprised to see again and never comments on how odd it is that he's alive) go as well to find their own solutions to the demonic plague. Aiding Miriam and Zangetsu, no less, was Alfred's old apprentice, Johannes, with whom Alfred shared a kind of fatherly bond.

Alfred encountered Miriam twice in the castle and, each time, he tried to encourage her to leave the castle and leave the demon hunting business to other hands. His worry was that Miriam would gain too much power from her demon shards and, as with Gebel, turn to the dark side. The second time he saw her, just as he was about to retrieve the book, he had to fight her to try and get her to back down. Even then, though, Miriam proved too tough, too resistance to being sent away. He knew she'd never leave so he vanished with the book, praying he'd find a solution before Miriam, as with Gebel, fell to the demons.

And yet it wasn't Miriam but another person, Dominique Baldwin, a acolyte of the Church, who proved to be the real danger. She attacked Alfred unexpectedly, leaving him for dead while she ran off with the book to summon Bael, a truly powerful demon. Johannes and Miriam found Alfred, near death, and were unable to save the Alchemist. Miriam did learn that Alfred was on her side the whole time, that he was just trying to protect her, and they said their goodbye before he died. Then she want on to avenge him and reclaim the book for the Alchemists (well, just Johannes at that point), finishing his work and ensuring no one else would be able to use the Book of Logaeth for evil again.

Despite being male, Alfred is essentially the Belnades-type hero for Curse of the Moon. Like the sorceress clan of Castlevania, Alfred uses elemental spells to unleash devastating damage, although the actual spells themselves are very different from their Castlevania analogues. His base spell, fire, creates a wheel of fireballs around him that can destroy low-level enemies and help protect him from weaker attacks. His ice spell creates a massive shard that shoots out in front, freezing all enemies. His mirror spell creates a duplicate in front of him, allowing him to attack safely from a distance. And then his most powerful spell, lightning, creates a chain of electricity that travels and hits enemies multiple times.

While his spells are powerful, Alfred is not a strong fighter. His melee staff has a very limited range, leading him to probably take damage from enemies he's fighting instead of damaging them. He also has the shortest health bar of all the heroes in the game, so he can't take a lot of hits (while also failing to dish them out in the process). The best bet when using Alfred is to have him cast spells and then immediately switch to another character so that can attack while the magic continues.

The only battle against Alfred is an interesting one -- because Ritual of the Night is a 2.5D Platformer, a few sections of the castle featuring rotating towers for the heroine, Miriam, to explore. Alfred's boss room was one of those rooms, with a small ramp Miriam could run up before dropping back down at the start of the tower. This gave the battle against Alfred an interesting twist since she had to aim her attacks carefully lest a weapon slash or item throw careen off into the void instead of hitting Alfred (since attacks traveled a straight line and didn't curve around the tower).

Meanwhile, as Miriam was trying to attack her one-time friend, Alfred was unleashing a variety of attacks at the girl. He could summon each of the elements types in attack form, dropping ice shards on her and shoot fire bursts. Most of his attacks, though, came in the form of elemental bombs, thrown attacks he'd hurl at Miriam that she'd have to dodge and run from to avoid their full blast. Although his fight was complicated it wasn't all that difficult; most of the attacks were easy enough to dodge, making it more about resource management and attrition that full, balls-to-the wall, in your face combat.