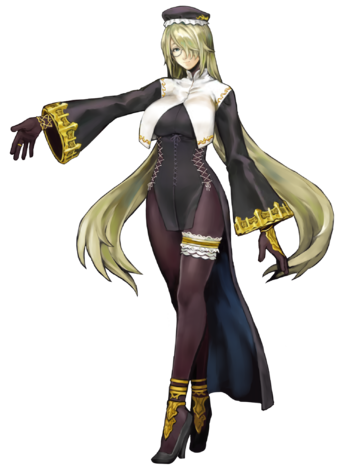 The Bloodstained games have not been shy about copying the style and aesthetic of Castlevania. If anything, they go out of their way to note and reference similar things between the two series, not just in the big moments -- like how Curse of the Moon is a lovely retro-allusion to Castlevania III: Dracula's Curse -- but in small nods, plot points, and character references. Everyone knows IGA was making his own version of Castlevania, but instead of playing coy the creator owned it, fully and completely.

It's obvious, in that regard, when it comes to Dominique Baldwin. Although the villains of the series may be different -- demons here, Dracula in Castlevania -- the construction of their stories is pretty much the same. A hero comes to a dark castle to fight evil and, while exploring the ruins, finds people to lend aid and assistance. Dominique fits that model, a member of the church that acts as a friend and gives aid and succor. But like, some characters past Castlevania heroes would meet along the way, DOminique also had her own agenda, hiding a secret that could very well change the story of the game.

Dominique, then carries on a tradition and helps this game slot in, stylistically at least, among the games that influenced and directed it. She serves a purpose, directs the story, and adds to its conclusion in a way you'd expect if you played many of these games before. SHe might be a bit of a trope, but she certainly does tuck in nicely even still.

From a young age, Dominique devoted herself to God. Like her parents, both of whom were exorcists with the Church, Dominique wanted to server the Church, and God, and help battle the demons that sometimes emperiled man. She was devout, and throughout her early life, she steadily worked her way through her studied as she climbed the order of the Church. 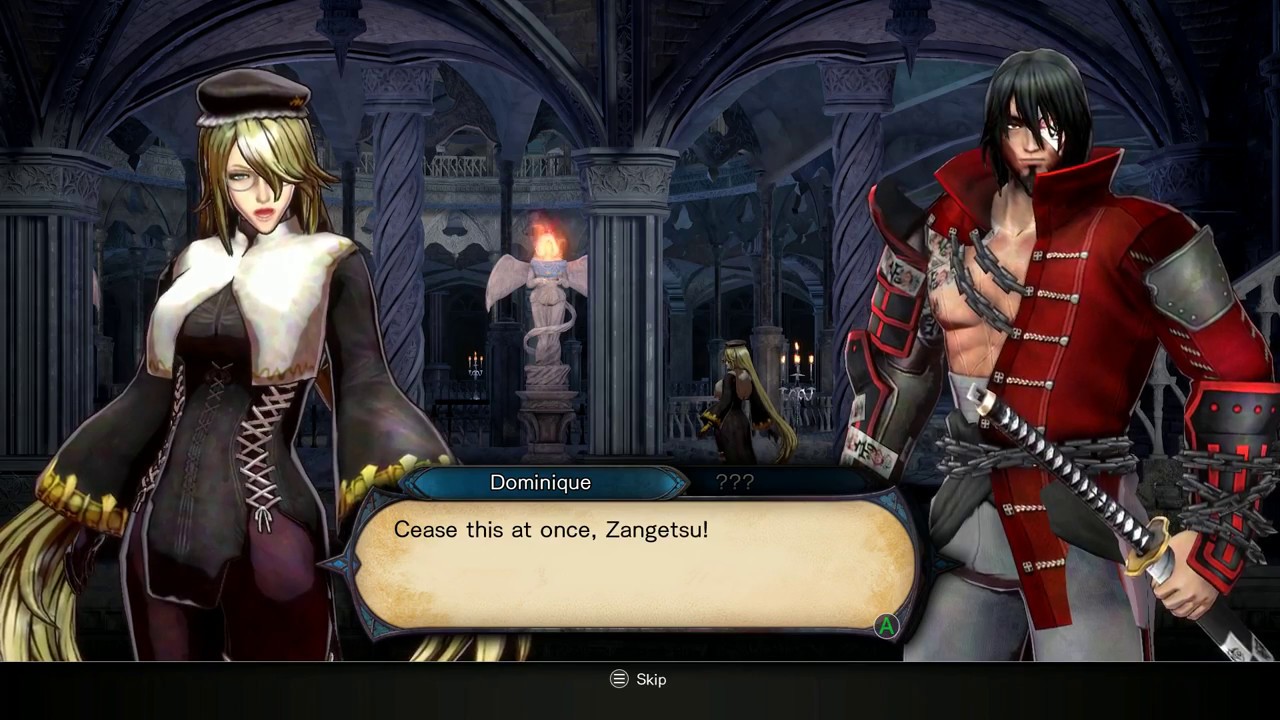 Her resolve, though, was shaken ten years prior to the events of Ritual of the Night (perhaps in reference to the events of Curse of the Moon) when demons attacked the town her family was staying in, killing both her parents. She begged God for a reason why her family had been taken from her, but her prayers received no response. EVentually her heart hardened and she turned her back on God, in secret not serving the Church but, instead, throwing her lot in with the demons.

Eventually she came up with a plan, a way to bring down the Church, and God, once she gained the power she needed. When an old friend, Johannes, contacted her, telling her about a Shardbinder, Miriam, Dominique saw just what she needed. Johannes was taking Miriam to a new nest of demons, a castle that had just appeared on the outskirts of the town of Arvantville. Dominique arrived there as well, serving as an aid to the heroine as she traveled the castle. Dominique set up a shop, selling items of aid to Miriam, and she would also buy Shards off of the heroine inder the guise that she was worried that too many shards bound to Miriam's body would eventually turn the heroine's heart.

Dominique also brought her own agent, Zangetsu, a demon hunter aligned with the church. Their supposed goal: to find the one responsible to raising the castle of demons, Gebel, and stop him at all costs. Of course, DOminique had a much more insidious plan, one she never mentioned to anyone else (not even Zangetsu because, of course, he would have killed her on the spot). An alchemist, Alfred, had also come to the castle in search of a magical tome, the Libre Logaeth, which could be used to stop the demons... or empower them further. Dmonique sent everyone after the book, hoping that Alfred would be killed and the book would fall into her unholy hands.

Time and again her agents came close, almost capturing the item she needed, but Alfred was always one step ahead, keeping the power just out of reach of evil. Finally, after Miriam confronted Gebel and turned him back to the side of good, freeing his soul from the claws of the demons, Deominique made her move, attacking Alfred, killing him, and stealing the magical tome for herself. Her true colors revealed, Dominique fled deeper into the castle to use the tome for her own nefarious ends.

Miriam, heroine that she was, tracked Dominique into the castle's core, confronting her for a final showdown. The battle raged hard, with Dominique unleashing powerful magics and attacking Miriam with all she had. Eventually, though, Miriam gained the upperhand and bested the evil sorceress. But Dominique wasn't done -- sensing that Miriam could defeat her, DOminique gave herself to the demons, summoning Bael and binding herself to the demon. Forced to fight in the demon's own realm, Miriam took on this combined force, demon and sorceress, eventually besting them both and condemning the lot back to Hell.

Dominique shares many characteristics with a character from the main Castlevania series, Yoko Belnades, another woman working for the CHurch, helping to fight the good fight against demons. Both aid the main heroes of their games (Yoko and Soma in Dawn of Sorrow / Dominique and Miriam in Ritual of the Night) by acting as shopkeepers while also doling out advice and assistance. But whereas Yoko remains a good guy, Dominique had evil in her heart the whole time.

This is where her name may have actually been a hint. While Dominique means "belonging to a lord", the "Baldwin" in her name might have been a subtle reference to Hugh Baldwin, a character in Circle of the Moon who found his heart tempted and corrupted by evil. In his game Hugh was eventually redeemed but, unfortunately for Dominique, her fate was sealed the second she joined with the demons. 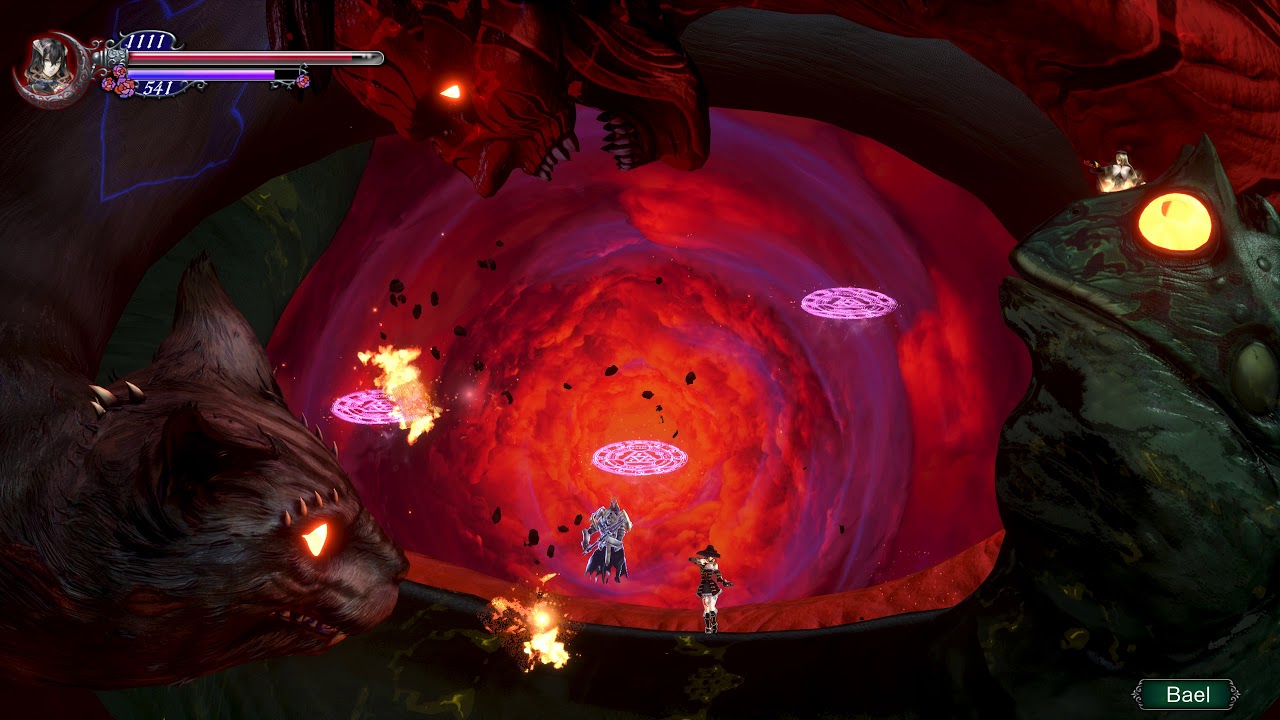 Like many bosses in the game, Dominique has a tendency to try and get in close, leaping at the player and then attacking with her whip. She can also summon a variety of elemetnal attacks that the player will have to dodge, from fire pillars that rise from the ground, to ice shards that will hover and then crash into the ground, homing dark spirits that will travel around trying to catch Miriam, fire orbs that will spray out in multiple directyion and burn when they hit walls, fiery lasers that will spread and fill the screen, and even summoning great dragons to attack with fiery smash. Essentially Dominique can use a number of shards you, too, can use, but she might just use them better. This, obviously, is a nod to the fact that the player could, in fact, have sold these shards to Dominique (but note she'll have these abilities even if you never sell shards to her at all).

This portion of the fight with Dominique is tough on its own. You need to come in with a lot of health items and be ready to spend them as the battle rages on -- don't think you can get through without taking damage (as most of us are not gods). And you'll want to learn Dominique's tells -- many of her spells can be dodged if you learn what they look like leading up to them. Even still, not everything can be so easily dodged, and often times Dominique has a tendency to just layer one attack on after another, making it very difficult to both dodge her and get your own attacks in.

Damage her enough, though, and Dominique will dummon Bael and suck the both of you into the demonic realm. The Bael fight is complex in its own regard -- the boss is constructed of three large snake-like bodies, each with their own head and its own attacks. The human-headed snake can spit fiery orbs at the player, the cat-like snake will shoot rays from its eyes, and the frog-like snake can summon damaging bubbles that will float up the screen. Also note that Dominique will attach herself to one of the snakes and ride around the arena and she can switch snakes as she pleases. She also has her attack, shooting out lasers aimed at the player. Plus, sometimes she'll clutch her head, like she has a bad migrane, and then the demon she's riding will spit out a massive tongue at the player. It's rough.

To win the fight you need to ignore Bael and instead focus on whatever snake Dominique is riding; although all three snakes can be damaged, Dominique has her own health pool, and if you kill Dominique then Bael will die as well. WHile each head can be taken out (temporarily), they have much more health than Dominique so trying to take out the fight this way is a losing proposition.