Castlevania for the Commodore 64 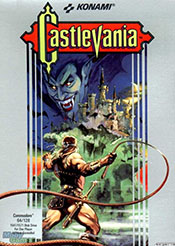 During the life of Castlevania, the gave received several ports, a number of which showed up on personal computers. Back in the day, computers were the best way to game (some would argue, of course, that's still the case), and with the boom and bust of the Golden Age of video games, many were convinced gaming on the PC was the way to go. Even through the '90s, many games continued to be ported to non-gaming systems.

Unlike its Amiga brethren, Castlevania for the Commodore 64 doesn't have great graphics going for it. The machine was, in many ways, less impressive than the Amiga, and it didn't have the graphical prowess to compete with the Amiga. The graphics on the Commodore 64 edition reside somewhere between the Atari and the NES -- there aren't nearly as many colors as the NES iteration, but the graphics aren't nearly as blocky as they would be an an Atari system (the thought of an Atari port of Castlevania frightens me). There's also a noticeable amount of screen-jitter/sprite-phasing -- not a game breaker, but you will see it from time to time while playing.

One blessing, though, is that everything in the game is a touch larger. This helps to make characters easier to see against the bland wash of colors. Of course, being slightly larger does make you marginally easier to hit, but better to be able to see your character clearly than to have to worry about that.

Most would agree that the music in the Commodre 64 Castlevania is where the game best shines. The SID music chip in the Commodore 64 could put out better music than the NES was capable of. While the music tracks (and sound effects) are similar, if a little more metallicy-sounding, they also have a richer range and tone. Your preference for the songs may vary, so if you feel like torturing yourself with this otherwise awful game to get to some great music, that's a choice to make.

And yes, this game's control scheme is as mangled as the Amiga version. The controls only allow for one action button (plus the joystick). To whip, you press the action button, but that leaves no room for the jump. Jump, therefore, is mapped to "up" on the joystick. This, then, creates issues when throwing sub-weapons -- normally you'd press up plus your attack button. Instead, you have to press-and-hold your attack button to throw a sub-weapon, which means timing is off for all your attacks (and with a game like Castlevania, you don't want anything slowing down your responsiveness).

Personally, if I had to pick between either the Amiga or Commodore 64 ports of Castlevania, I'd choose the Amiga version. I like the graphics better, and I'm partial to the musical stylings of the Amiga. Neither, though, are worth playing if you can just get your hands on a copy of the original game.