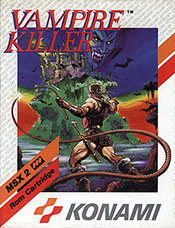 In America, the Castlevania series was seen to do a bit of a weird evolution, followed by a quick course correction. With the release of the original Castlevania, Konami set forth a game that helped to define platforming for the NES era, and yet was distinctive enough from the Super Mario series to not feel like it was even in the same genre. With Castlevania II, Konami took their platformer and went in a new direction, forsaking straight-up action for a blend of exploration and adventure. And then, Castlevania III returned players back to a near-linear quest through Dracula's castle.

As the years went by, American gamers thought of Castlevania as an action-oriented series, and the explorational aspects were considered one-off flights of fancy. Up until Symphony of the Night, Castlevania could be relied on for hardcore action and platforming just like the games of old.

And yet, what if the action-platforming dynamic wasn't the real goal with the Castlevania series? What if Castlevania II wasn't a one-off game, but the original intent for where the series would evolve to? While we can't see into the minds of the men behind the original games, we can take a peek at what they potentially thought Castlevania would become. Released in Japan (and then eventually parts of Europe and, oddly, Brazil -- all places that had the MSX2 Computer system), Vampire Killer gives us an alternate take on the original game in the series.

Published one month after the original Castlevania (so, obviously, the two games were developed side-by-side), Vampire Killer opens much the same as we'd expect: Simon enters into Dracula's castle, kicks ass and takes names through seven stages, all so he can defeat the foul vampire and save the land of Romania. Many of the stages are similar, Simon still has his weapon, and his sub-weapons are all waiting to be discovered.

And yet, all is not the same. To advance through the game, players have to find keys hidden throughout sections of each stage -- in candles, in parts of walls, in hard to reach places. Stages are broken into four parts, and the player has to find a skeleton key to unlock doors and gain access to the next section. Levels are capped by bosses -- the same as from Castlevania -- and everything culminates in a similar (although eventually quite different) battle with Dracula.

Along with skeleton keys, Simon can also find regular keys that he can use to open treasure chests (for additional weapons, shields, and power ups). He can also collect money and buy items from merchants hidden throughout the game. If these elements sound mostly familar, that would be because a lot of these concepts were used again in Castlevania II. As a direct sequel, Castlevania II is odd in comparison to the original. But compared to Vampire Killer they feel like kindred spirits -- a proper sequel to a lesser-known title.

Sadly, despite a lot of interesting ideas, Vampire Killer is a bit of a flawed game. Players will only get three lives (without cheating) and no continues. Once you die, you have to start all the way back from the beginning. And you will die, quite often. Even if you have a good port of the game (in a proper emulator that can handle the game properly, or some how have access to an original MSX and a copy of the game), enemies are just savage. Medusa heads have a wide path they fly along, and even properly emulated, everything moves quickly, giving the game a relentless pace. This is coupled with Simon having a quicker whip animation, making the timing of attacks twitchy. And all of this is exacerbated if your emulation is off and the enemies move at lightning speed (a common issue with the game).

Weirdly, Simon also can gain the use of his sub-weapons, but they replace his whip for the duration. Certainly, in the case of the speedy daggers, this isn't a terrible thing -- the daggers are more useful than the whip, honestly. Other items, such as the axe and the cross, are slower, leaving Simon potentially open to attack as they fly back and forth across the screen (the axe, in Vampire Killer, is like a cross with a shorter path).

All of this culminates in a game that's frustrating to play. Having all your progress wiped out by a stray Medusa head, and then having to go back to the start to try again can leave players longing for the easier (by comparison) game-play of Castlevania.

From a technical standpoint, Vampire Killer is a mixed bag in comparison to the original game. The game doesn't scroll, unlike the original, so players travel from screen to screen. Some may not mind this (it's a bit like original Legend of Zelda in this respect), but others may find this "chunky" layout ruins the flow of the castle.

Graphically, the game is a touch prettier to look at. While still having fundamentally the same areas, sprites are touched up a little, and more colors are available to the system (as the MSX could handle a little more than the Famicom/NES could). This gives the game a graphical edge over the original Castlevania, but both are certainly games of their era (and are clearly blown out of the water by later entries in the series). Similarly, the music is an subtle imrovement over the original, as the MSX had a slightly better sound system built in. It also featured one new song, the "Ending Theme". Otherwise, everything is basically the same between the two entries.

So for all its attempts at something different, Vampire Killer doesn't get enough right to be an improvement over the original Castlevania. It's certainly an interesting attempt at something new, and its influence through later titles (especially as so many of them have become more explorational than action-oriented) can still be felt. On its own, though, it's just not good enough.