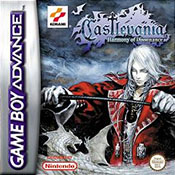 When the first Castlevania for the Game Boy Advance came out (Circle of the Moon, released in 2001), the primary complaint against the game was that it was "too dark". The original Game Boy Advance screen wasn't backlit, and although Circle had very nice graphics, the darker graphics did prove hard to see for some. With the release of Harmony of Dissonance, Konami put the series back in the hands of Symphony of the Night creator/director, Koji Igarashi, and he worked to create a game that took the Game Boy Advance's hardware limitations consideration.

In Harmony, you play Juste Belmont, descendant of Simon Belmont (Juste's grandfather, allegedly). According to legends, Dracula's Demon Castle appears once every one hundred years. Per the legends and history, Dracula is not meant to come back for some time. However, Juste finds himself in the gates of a mysterious castle that appeared in the hills. Shortly before, Juste's old friend, Maxim, brought news that their mutual friend, Liddy Erlanger, may have been kidnapped and taken to the castle. Maxim seemed trustworthy, but he'd been away on strange travels for years, and his demeanor hadn't been the same since he came home. This is only exacerbated by him stating, when you meet up with him, that something is wrong and he's having trouble remembering events that may have happened. The two heores go on a search throughout this mysterious castle, searching for Liddy and trying to figure out where this castle came from.

Throughout your journey, you will find clues to the origin of the ominous castle -- this out of place, disonnant construction -- a nightmarish castle not meant for this world. Upon venturing through the castle, you'll encounter Death who tells you that "This is Dracula's Castle... but the power that is here is not my Lord's". Who is behind the castle reappearing, and what really is going on with Maxim, Lydie, and how it all ties together?

Playing as Juste, you have many of the powers of the Belmont clan, but mixed in are some of the traits of his ancestress, Sypha Belnades. Special spell books can be found throughout the castle that will unlock spells to be used in conjunction with the sub-weapons that Juste finds in candles (the standard hiding place of all sub-weapons, of course). Using the sub-weapons available -- the dagger, cross, axe, holy water, and (a new item) the super fist -- combined with any of the five spell books -- ice, fire, wind, earth, and darkness -- will cause different effects (sort of like the DSS system in Circle of the Moon). These combinations range from having helper familiars to summoning spells.

As a Belmont, Juste uses the family whip, the Vampire Killer, and he can brandish it around like his grandpappy Simon did. Aside from this, though, there isn't much to Juste. He will pick up relics in Dracula's Castle that will enable him to slide, double-jump, super-jump, and other abilities that we have been seeing a lot lately (both in Symphony and in Circle). He can also equip different tips on his whip that change its powers, from twirling his whip (like Nathan in Circle) to shooting fireballs (like Christopher in the Castlevania Adventure). In addition, he can equip various pieces of armor and accessories that will boost his stats or give him certain bonuses.

To make Juste more noticeable, the hero now has a weird blue outline surrounding him. He's also really pale (he looks like Alucard). The castle is a lot more detailed than in Circle of the Moon. However, this castle is a lot brighter as well, which makes it less ominous than previous iterations. Although the game is a lot like Symphony, it as has the worst ambiance of the three games so far.

In the game, as with previous Symphony-style entries, you'll move from area to area, gaining powers and occasionally interacting with other characters -- primarily Maxim. While there are many areas to explore (including a proper Castle Entrance, Clock Tower, and Castle Keep), and even two castles to try and navigate, the rather samey graphics don't help in orienting and navigation. Everything is very pale, very grey, and while many of the sprites are quite detailed, it all feels very similar, and rather boring.

While Harmony of Dissonance boasts a different kind of soundtrack than Circle of the Moon -- with some interesting, sometimes very powerful tracks -- the game doesn't use the hardward very well. Harmony uses the original Game Boy's sound channels, rather than the new Game Boy Advance sound mixer, resulting in music that will sound like stuff from the NES (with square, saw, and triangle waves). Don't expect orchestral renditions when playing through the "Chapel" or organ riffs in the "Clock Tower". The usage of wavetable sounds in the game is nonfrequent. Some people might even go as far as saying that the music took a turn for the worse. However, it is only the sound quality -- the actual songs are very catchy, so while the music isn't bad, you do have to have a love for chiptunes to enjoy it.

There are a number of endings to this game, depending on what Juste discovers about the Castle. Additionally, finishing the game will unlock "Boss Rush" mode and a sound test, and depending on how you finish the game, you can unlock additional characters for some of the modes. "Boss Rush" lets the player battle all the bosses in the game, one at a time, in a race to get better and better times. It's not the deepest mode, but coupled with the rest of the end-game content, there is a good amount of depth to the game.

For multiple reasons, the graphics in this game are not perfect. First, Juste's running sprite looks weird -- the animation just looks wrong. Even Nathan's four-frame run (in Circle) looks better.

The second is Juste's pointlessly annoying blue outline. I don't see the reason for this outline, as Juste is pale enough to stand out. While the outline may have been implemented to make Juste easier to see, it ends up looking cheap. It reminds me of Alucard's dashing outline, but Alucard had a reason for the glow, and Juste does not.

Lastly, many of the enemies in the game are just repurposed from Symphony of the Night. Axe Knights, Bone Scimitars, and many others are exactly the same, straight out of Symphony (which used some of the sprites from Rondo of Blood, so these are starting to get rather old). Sure, some are pretty, but new artwork would be appreciated. As for backgrounds, everything looks bright and gray. It's really annoying at times, as actually colorful, memorable areas are hard to come by. I can only think of the "Castle Entrance" and the "Chapel" as areas that are pleasing to the eye. Everything else looks drab.

The musical compositions are awesome. There are several kickass tunes with lots of power and force behind them. It's just unfortunate that the older sound processor was used, so all of the tunes are very old-school. Some gamers may find these tunes annoying and might turn their sound off in order to avoid the nasty chip tunes.

Memorable tunes include "Successor of Fate" (the theme of Juste Belmont) and "Offense and Defense" (the powerful bass-driving Marble Corridor music). There's a good mix of old and new in the game, so those with an ear for older-style music will enjoy the soundtrack.

There is not much to say, here. As expected, the play control is top notch. I happen to dislike that Juste cannot use his primary attack (the whip) in the air, land, and continue running (which Alucard and Nathan could both do) -- it's very old-school. I also dislike that the dash move is not much help when traversing through the longer parts of the castle. The brandishing of the whip is seldom useful, and the whip doesn't seem long enough at times. The sub-weapon/spell book combos are nice, but many of them are completely useless (although, to be fair, the same complaint could be leveled against DSS in Circle of the Moon) and some don't seem as powerful as they should. Plus, there just aren't enough combinations, especially good combos to out-weight the bad. Circle of the Moon had 100 different combinations, while this game has only 25, so there's a lack of depth and usefulness.

This game is probably the easiest Castlevania I have ever played. I never died during a boss fight. Ever. I never died during one run through an enemy-filled hallway. Even if I was weak, I never died, because so many enemies dropped potions to help me out (which I only used once, near the end of the game). This is a step down in challenge from Circle, and it easier even than Symphony (which is known for being an easy game).

The story is very nice, though. I like some of the twists and turns. Liddie, though, is the standard fodder to lure the hero to the castle -- a plotline that has become more and more rote as the series has gone on (women are just not treated well in modern Castlevania).

That aside, Maxim is an interesting character and he adds to the storyline. Those with any familiarity with twists in the Castlevania games can probably guess Maxim's role, but he's still a well written character.

Once the game is finished, there is a "Hard Mode", which helps to even out the difficulty some. However, after one trek through this boring grayish castle I did not want to run through it anymore. It's just a decent game, and while a fair enough addition to the Castlevania series, I can't say it's worth many play-throughs.