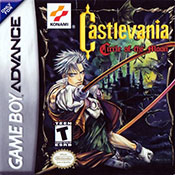 Years ago, Dracula came back from the dead (don't know if you'd heard, kinda was news at the time). Morris Baldwin, current keeper of the Hunter's Whip (thought to be another name for the Vampire Killer), lead the attack on the demon lord, saving the world from his impending evil. Well, sadly, Dracula is back (he's always coming back), and it's up to Morris and his two aprentices, Hugh Baldwin and Nathan Graves, to save the world once again.

Except, things don't go according to plan. Morris is captured, and Nathan and Hugh are dropped into the basement of the castle, presumably never to be heard from again. Hugh storms off, pissed that his father has been captured and that he doesn't get to be the one to save him using the Hunter's Whip, as Nathan became the owner of that whip (with Morris Baldwin's approval). Nathan has to explore the castle on his own, using his wits, his whip, and the items he finds along the way, all to stop Dracula and save the day once again.

Circle of the Moon was the first Castlevania game released for the Game Boy Advance. It was also the first game to function as a sequel to the playing style of Symphony of the Night, a return for the series to the Metroid-ish exploration Symphony popularized. Circle, though, does have some neat twists on the formula.

Firstly, Nathan uses a whip (unlike Alucard and his infinite inventory of random weapons). While Nathan can upgrade his armor and items, he's stuck with just the Whip (and no physical upgrades) as his primary weapon. He does gain access to the standard Castlevania sub-weapons (knife, axe, holy water, cross, and stop watch), and under the right circumstances (detailed below), can even "Item Crush" those weapons. For basic gameplay, this means that you get a lot of what's great about Symphony, with the added bonus of a very Belmont-style character.

Areas in the game are expansive, even larger than in Symphony. We're not just talking more rooms, but larger, more expansive rooms with bigger twists and turns. Later entries in the series tend towards long hallways and small room, without a lot of larger sections, but many areas of Circle feature giant rooms that scroll in every direction, allowing for a lot of exploration, and a lot of enemies.

Another interesting twist comes from the game's magic system. Instead of learning spell-combos (as Alucard does), Nathan collects cards. Magic cards (not the lame kind). Each card symbolizes either an elemental totem Animal, or of a God or Goddess from greek mythology. When a totem card is combined with a divinity card, a resulting spell combo is cast. These can range from a special shield (like rotating ice orbs), to new whips or other weapons, to item crushes, and even summons. The diversity of the spells is quite staggering, and just about anyone will be able to find a combo they prefer.

A down-side, though, is that the DSS (Dual Setup System) cards can sometimes be quite aggrivating to find -- and are often hidden nonsensically. The best example is the Serpent card, which grants Ice elemental effects (Serpent being a reference to Norse mythology). Early in the game you can get the Serpent card if you fight enough Earth Demons -- but why an Earth elemental monster is holding an ice elemental card is never explained. Plus, the two best elemental cards, Unicorn (holy) and Black Dog (dark) are hidden inside the game's Battle Arena area, and can be near-impossible to get if luck isn't on your side.

Luckiness aside, the magic system gives a lot of depth to the Symphony formula, but that's not all for improvements. Simply put, in comparison to Symphony of the Night, Circle of the Moon is quite challenging. The game nicely ramps up the difficulty, making each section successively harder to get through. Even better, as you improve and unlock more of the castle, earlier areas will also upgrade the challenge, putting in new monsters to keep you working. This can lead to many situations where you have to be ever mindful of where the save points are just so you don't lose too much progress when you die (and there are a few instances where death will just happen).

The bosses aid the challenge of the game. While not all of them are super difficult (Cerberus will prove somewhat challenging early in the game, but that's only because of how weak you are, while the Zombie Dragons are pretty boring), others will prove quite difficult. A solid mastery of your various DSS combinations will be needed to get through many of the challenges in your path (Adramaleck is one of those bosses I love to fight, but I always have to change up everything I do just to find the right way to beat him). Circle of the Moon is a long game made better by solid (but by no means unfair) difficulty.

Unfortunately, as with Symphony, Circle also suffers from late-game god-like powers. The worst of these are the summons, which are fun to have, but prove hard to balance against. The summons will do catastrophic damage to anything on screen (or, in the case of the Unicorn, massively heal Nathan), and in the process of casting the lengthy spell, Nathan is completely invincible, and his magic meter refills. For the last stretch of the game, it's possible to just constantly cast summons (since your magic meter will be regenerated by the end of the spell) as you work your way through to Dracula (and, probably, through the battle with Dracula as well). Sure, you don't have to use them, but just having them makes the game easier. A way to transform into a skeleton is even worse since, thought his can't take any damage without dying, he can throw ungodly powerful bones that can pretty well kill any boss you run into (again, including Dracula).

And since I mentioned the Battle Arena, it's best if a little time is spent discussing that area. Hidden away in the upper right of the castle, the Battle Arena features more difficult versions of various enemies encountered in the game. You have to fight, and kill, everything you encounter, and you have to do it with only whatever health you started with, minimal pickups, and no magic at all -- your DSS cards are totally useless in the Battle Arena. The Arena is where you test your mettle, and it's the best, and most challenging, part of the game.

Finally, on the topic of getting the most out of your game, Circle has additional "quests" you can playthrough after you beat the game for the first time. Four modes -- Magician (which gives you all the DSS cards and maxed out magic), Fighter (all power, no magic), Shooter (sub-weapons and lots of hearts), and Thief (all Luck) -- can each be played, in succession, giving you new ways to playthrough and discover the game. It's kind of like other games in the series giving you additional characters to play as (like Symphony including Richter), but a far more thought out and fleshed out experience.

Graphically, I think Circle is one of the prettiest games up to, and through, the Castlevania Game Boy Advance era. Graphics are lush, with plenty of colors. Sprites are distinctive, well designed, large, and clean (later games put an aura around enemies to help them pop out, an effect I dispise). Some have commented that the game's graphics are rather dark on the Game Boy Advance, but I personally never saw an issue while playing it. It's even better if you have access to the Game Cube with a Game Boy Player -- Circle of the Moon thrives on a TV screen.

Sound-wise, portable Castlevania games have never sounded better. The game boasts quite a few remixes of past tracks (such as "Vampire Killer", "Aquarius", and the "Clockwork Mansion") as well as new tracks. The standout track of the game is also the first you'll encounter, "Awakening", a catchy track that helps to set the tone for the game.

There's a lot to love about Circle of the Moon. It gets so much right -- improving on the groundwork of Symphony -- while getting very few things wrong. For me, it's one of the best Castlevania games released, and easily the best portable iteration of the series. A total must buy for anyone, hardcore or casual fan alike.