In 1998, the video gaming press was a-buzz with rumors that Castlevania was going 3D (well, by the gaming press I mostly mean Nintendo Power, and by a-buzz I mean a couple of articles on it... and by 3D I of course mean 3D polygon graphics, not this new-fangled attempt to cram 3D up everyone's everything). At the time, Castlevania was a 2-D Platforming series (especially since Nintendo Power conveniently ignored that Symphony of the Night, a release for the Sony PlayStation, existed), and the series going "3D" was big news. The world (again, specifically Nintendo Power) sat in wonderment about how the new Castlevania entry would play.

The answer: pretty decently, but not without some major issues. As far as the transition to the 3D realm, the undisputed king is the Super Mario series; Super Mario 64 showed the world that a 2D platforming series could make the transition to 3D gameplay without suffering from the change-over. And while Castlevania for the Nintendo 64 (Castlevania 64 for short) gets 75% of the way there, it isn't able to quite come together like it should.

Castlevania 64 stars Reinhardt Schneider (current heir to the Belmont destiny, and distant cousin to the clan) and Carrie Fernandez (of clan Belnades). These two heroes, seperately, have come to Dracula's castle and through parallel stories will work to rid the land, once again, of the foul vampire. Each will have their own, similar adventure, although elements (and in some cases, stages) will be different for each of them as their plotlines unfold. Reinhardt will meet Rosa, a recently turned vampire who Reinhardt tries to save from eternal damnation. His quest will lead to a battle against Death himself, and an attempt to save Rosa's soul from Hell. Meanwhile, Carrie will battle against the evil sorceress Actrise. Actrise will attempt to bring Carrie into the fold, to use the Belnades decendant to fuel Dracula's own magic. 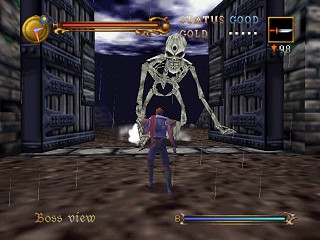 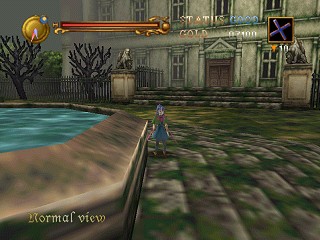 As far as story is concerned, Castlevania 64 gets a lot of things right. Having two concurrent but different storylines means there's more reasons to play as each character -- and since the two can't be played at the same time, there's no option to rely more heavily on one over the other to see the full story. Plus, I have to admit I like the fact that neither of the heroes are the "tortured, reluctant hero" type (that trope being the property of Alucard, all rights reserved). Each is there on a singular mission, and while some of their goals may expand, they're the good guys, they're in the right, and come Hell or highwater, they will win.

As far as mechanics, the game is a bit of a mixed bag. As a Castlevania game, the goal would be to have good action and good platforming. And yet, when it comes to game play, the explorational sections are more interesting than the action sequences. Part of this is just in the way the platforming is handled -- namely, it's attrocious. Konami, in their infinite wisdom, gimped the characters' jumping ability, giving them more of a "hop" than a soild leap. To compensate for this weird decision, they also let the characters grab onto, and climb, ledges. Much of the platforming sections involve your character jumping at ledges, or lowering themselves down from ledges. It's as boring as it sounds.

Well, that is when the mechanics actually work. More often than not, your character will simply decide not to grab hold of a ledge no matter how well aimed your jump was. Down he or she goes into the abyss, and it's time to reload from a previous save and start it all over again. And you will see this happen many, many times. It got so that "fuck you, Reinny" was a standard curse for the game. 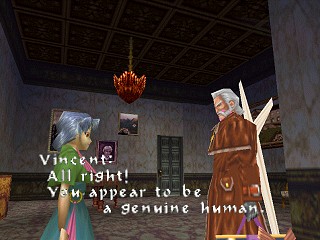 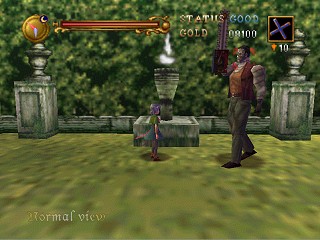 The actual fighting is a touch better, although I have a feeling I didn't play the game the way the designers expected. Each character has their own primary attack (a whip for Reinhardt, magic blasts for Carrie), and a short/weaker secondary attack (a short-sword for Reinhardt, bladed bracelets for Carrie). Like in any Castlevania game, you collect power-ups and sub-weapons, allowing you to use more powerful attacks -- and, in theory, relegating your secondary weak attack to the background. In practice though, due to the regular reloads in some sections, and the infrequent placement of power-ups, you'll end up getting used to your secondary attack, which while weaker, has the odd benefit of being much faster. I found that, even on many of the bosses, I was simply better off charging full bore at whatever was in my way, sword or bracelets flailing, and the sheer number of attacks I could land would win the day.

For the record, playing as a Belmont heir and not using his whip is as weird as it sounds, but you get used to it if you want to make it through the game.

I would be remiss if I didn't talk about the exploration a bit. There are a few sections of the game where you're tasked with a slower pace, trying to solve puzzles instead of killing everything in your path. I know many players hated these sections, but I actually liked the change of pace they presented. Admittedly, the Castle Center (with the fucking explosives and all the gears to dodge) is a bit of a pain in places... and yet, once I got through it, I felt like I achieved something. 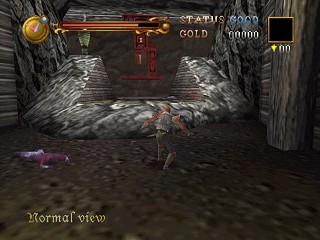 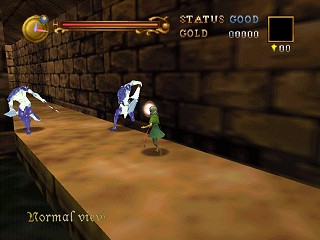 Now, this game is on the Nintendo 64, so automatically it's not going to be the prettiest game -- Nintendo 64 games, while being awesomely 3d, are also, by and large, hideously chunky. The graphics aren't great, but if you can ignore the somewhat blocky character designs (oh, all the pointy-headed characters), the ambiance is spot on in the game. Most of the levels have a dreary, dank, lived in feel. Each level is distinct, unique, and thematically appropriate. The hardware may not have been the best (early systems in any graphic style normally aren't), but the artists did all they could within their limitations.

On the flipside, I'm not as big a fan of the soundtrack to the game. While most Castlevania games feature rollicking soundtracks with distinctive, toe-tapping tunes, Castlevania 64 went for a more ambient soundtrack. The mood is enhanced, sure, but I can't think of a single track that really stuck in my head for longer than a few minutes after playing. "Castle Center" and "Tower of Sorcery" are the two songs that stick out best, but I wouldn't put them anywhere in the same league as "Vampire Killer" or "Iron Blue Intention".

And yet, despite it's flaws -- from the only okay graphics, to the largely meh music, and the at times wonky combat and platforming -- I find myself rather linking Castlevania 64. It's not a great game, certainly no Super Mario 64... and yet it tried to be something new. So often in later Castlevania games the series seems content to simply do more of the same as what came before (as in, more Symphony). Castlevania 64 may have failed at times, but it failed admirably. There's something to be said for that. 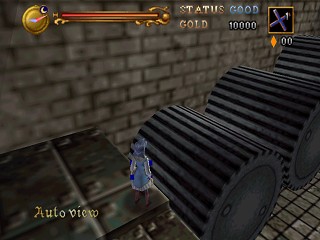 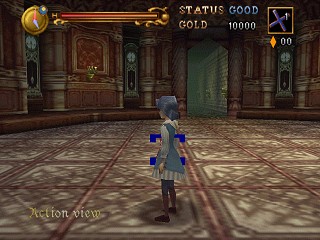 Within months of its original release, a prequel/re-release of Castlevania 64 was announced. Originally called Castlevania 64: Special Edition, it eventually came out as Castlevania: Legacy of Darkness. The main mode of the game concerns Cornell, a werewolf going to Dracula's castle about 10 years before Reinhardt or Carrie. As the primary adventure, his quest would naturally qualifies this game as a prequel... and yet, Konami has admitted it's basically the game they wanted Castlevania 64 to be (Reinhardt and Carrie are included as unlockable bonus characters, and their adventures are fully playable, with just a touch of remixing).

Maybe it's a bit of a cheat, but if Konami says this game was what Castlevania 64 should have been, then we're going to call Legacy a "remake" and not a truly sequel/prequel in the series.