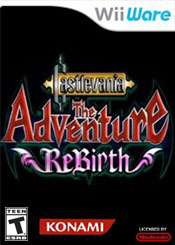 Although Konami has largely gotten out of making oldschool platforming Castevania game, once in a while they release a little something to please the long-time fans before going back to 3D games or focusing on mobile devices (see also Castlevania Legends, released after the roaring success of Symphony of the Night, and before the constant stream of Metroidvania games to follow). Such was the case in 2009 with the release of Castlevania: The Adventure ReBirth for the Nintendo WiiWare marketplace, a game that has the distinction (as of this writing) of being the last oldschool Castlevania game released by Konami.

The game was called ReBirth as it was part of a series of remakes by Konami in 2008 and 2008 (other titles being Gradius ReBirth and Contra Rebirth). They were supposed to be fresh interpretations of classic games, giving something to long-time fans while reintroducing the franchises to the world. While the goal was noble, at least in the case of Adventure ReBirth the game seemed to actively try to turn away new fans.

To be specific, Adventure ReBirth is hard. Incredibly hard. Like it's predecessor, The Castlevania Adventure, Rebirth seems to take glee in torturing its players. Enemies are constant and usually placed in just the right spot to nail players, forcing players to re-play stages over and over again just to learn the proper pattern to get through. Not that going through the stages again and again is any easy feat -- the stages are complex and very long, with all but the last taking four to six minutes to complete, and all requiring the defeat of difficult mini-bosses as well as bosses. 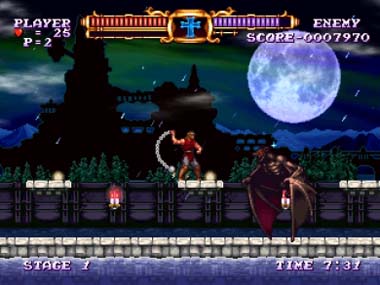 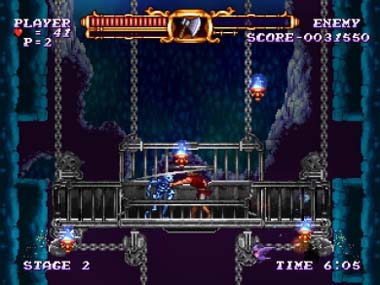 Heck, if you want to make it extra hard on yourself, you can even play in "Classic" mode, where Christopher plays with the very oldschoo, traditional stiff controls, upping the challenge even further. In a way it's like the developers heard the long-time fans say, "we want a tough, oldschool Castlevania game," and they decided to make them eat their words. Those looking for a challenge will probably be delighted, but all other fans (and new players) will need to be warned that this is not a game that in any way take it easy on you.

If you can get past the unrelenting challenge (which, admittedly, may be a bonus for some), there is a lot to like in Adventure ReBirth. For starters, the graphics are lush and gorgeous featuring highly detailed sprites as well as number scaling, alpha, and 3D effects to make this one of the best looking 2D platformers in the series since Symphony of the Night. This is a game that's enjoyable to watch, even if you're ust on the sidelines watching someone much better at the game run through the levels.

Adding to the graphic treat is the fact that Konami, for once, didn't simply reuse sprites from older games. As any fan of the Metroidvania games can tell you, most of those games reused the same sprites over and over again (the was especially the case in the later DS games which fed a suprising amount off the sprites from Symphony of the Night as well). Thankfully, for ReBirth Konami went through and drew new sprites for everything. Much like how all the stages are new, all the sprites are original as well, making this game feel fresh and new in ways Castlevania games haven't in a while. 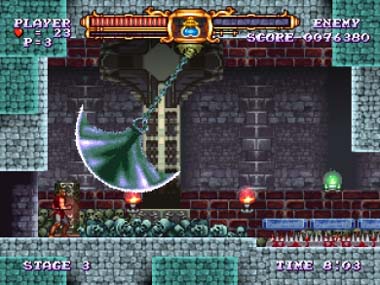 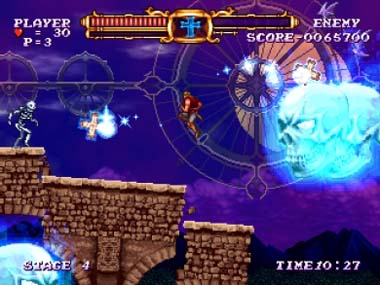 Listening is a treat as well, with the game featuring tracks from not only the Adventure games, but tracks from the entire series. Every track featured, from "New Messiah" originally from Adventure II to "A Lullaby Sent to the Devils" from Haunted Castle, has been remxed and remastered, making the music feel just as lush as the graphics on screen. If there's any knock against the music in the game it's simply that it does feature enough tracks from the original game (with only the original opening track getting a remix) or it's sequel. The music selections give ReBirth a "retrospective of the series" feel instead of just being a simple remake of The Castlevania Adventure.

In fact, this is probably the biggest issue many are going to have with the game. With the name Castlevaia: The Adventure ReBirth long-time fans would expect more from Christopher's original journeys in the game, but while many monsters and some traps from that game show up, it feels less like an Adventure game and more like just a traditional oldschool game. That's not a huge, issue, sure, but fans of this game that haven't played the older titles might go back to the first Adventures and find a different kind of game than they were expecting.

Which then makes one wonder why they decided to remake The Castlevania Adventure at all. If you swapped out Christopher for Simon or Trevor, no one would probably have questioned it at all. In fact, it might have made more sense to simply make a new adventure for one of those two heroes. Arguably fans and new people alike are more familiar with Simon or Trevor (or even Richter) than Christopher, so while this reviewer was happy to see live thrown in the direction of the classic Game Boy Belmont, the game may have been better served (popularity-wise) with a more famous hero at the reins. 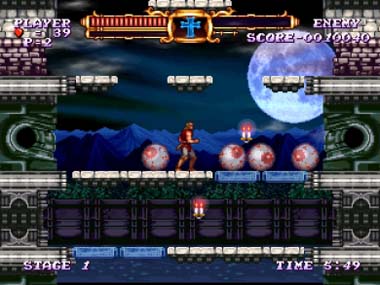 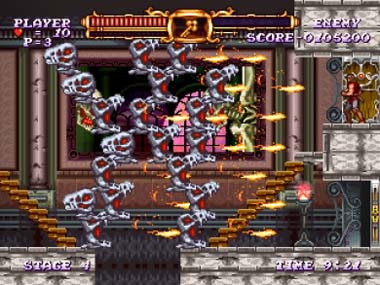 That's a minor quibble, though (and really, just a note of sadness since it does seem like Konami is going to make any more ReBirth games -- maybe it would have been different if this game had done better). By and large this game is a success. Not everyone may be able to play through it, but those that are willing to put in the effort will be rewarded with a lush, detailed experience for the eyes and ears. Castlevania: The Adventure ReBirth is a game any fan of the series (old, new, or simple passing through) must play. Give it a chance to annoy you, and enjoy all the pleasures it has on offer.