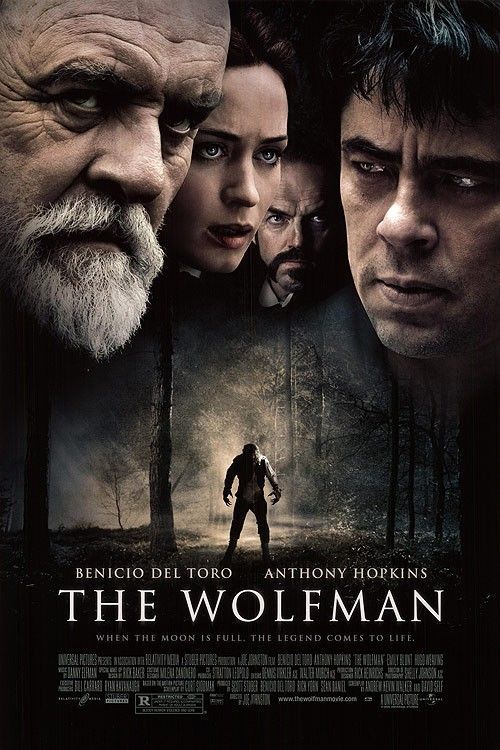 Oh how Universal has desperately tried to relaunch this Universal Monsters shared universe. They tried with the 2014 Dracula Untold and then again, hopeful about launching the Dark Universe with the 2017 The Mummy. Both attempts were not seen as successful, but it's clear at this point if they had just paid attention to their previous reboot attempt, 2010's The Wolfman, they would have realized people really didn't care about these monsters anymore.

Or, at least very least, people didn't care about the way Universal was going about rebooting them. Arriving at the start of 2010 (in the February dead zone for cinematic releases), The wolfman was met by largely disinterest shrugs by audiences, barely recouping even its basic budget during its time at the Box Office. It is a gorgeously made film, make no mistake, but it's high production values are about the only thing this film gets right as, in all other regards it crafts a movie that, frankly, no one would enjoy. Both boring and grotesque, cerebral in plotting and stupidly acted, this film is at odds with itself the whole time and never once settles down to figure out just what kind of movie it really wants to be. It is, in short, a mess.

The film does itself no favors from basically the outset. It does open with a werewolf attack (despite being called "The Wolfman", people only ever talk about "werewolves" in the film), but then we cut away to Lawrence Talbot (Benicio Del Toro) acting in Hamlet in London and, god, it's laughably bad. Del Toro seems lost in this character within a character, and he honestly never finds the heart of Talbot in any of his guises, neither as an actor, or as a son, or as the wolf.

Larry is dragged into the story (and away from his life as the worst, most respected actor in London) when his brother's fiancee, Gwen Conliffe (a fantastic Emily Blunt), arrives with news that his brother is missing and presumed dead. Larry dashes off to the family estate, a place he hasn't visited for years, to aid in the investigation. His father, Sir John Talbot (Anthony Hopkins), is an aloof man with little respect for his estranged son, so the two are immediately at each other's throats. And then, while investigating the disappearance (and, as it's later proven, horrible murder) of his brother, Larry is attacked by a wolf man. Soon Larry is turning into the wolf himself and he has to find out what can be done, can he be cured, all while worrying about who the original wolf was and how to stop that beast as well. 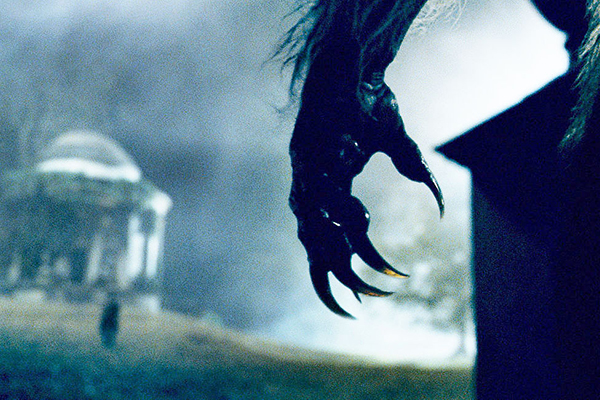 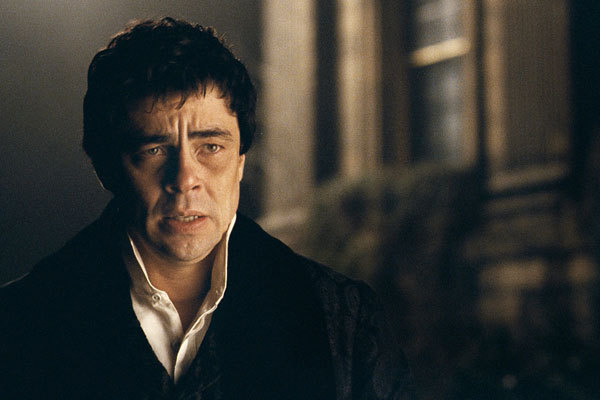 I kind of get what the movie was going for, a kind of "sins of the father" storyline. As we eventually learn (and spoilers for a ten-year-old film), Sir John is the first Wolf Man. He was bitten on an expedition in foreign lands and when he came back he found he turned into a wolf when the moon was full and rose high in the sky. For years he kept it in check (after killing his wife, their mother), but then he was unable one night and killed the other son and, ever since, he's let himself roam free, leaving it up to Larry to stop him. Larry and his father haven't ever gotten along and now the conflict between them is made manifest by the monsters living within them.

That all works, on paper, but what the film needs to sell this version of the story -- a story that now isn't just about the fear of the monster within, as was the plot of the original film, but also about an external foe and familial tension -- are actors up to the task and, here, this film completely falls apart. To put none to fine a point on it, Del Toro and Hopkins were the absolute worst actors to take on this task as neither of them invest in the material at all. Del Toro seems lost and confused, always giving the same expression for everyone on screen, both a little sleepy and a touch dazed by a story that seems clearly beyond him. Hopkins, an Academy Award winning actor, just doesn't seem to care at all about what he's doing; clearly he signed on for the paycheck so all he bothered to do was show up on set and read lines. That's his level of commitment to The Wolfman.

The leads stand in sharp contrast to two supporting roles that completely blow their performances out of the water. Blunt is energetic in her underwritten role as Gwen, selling the part for all its worth as she lights up the screen. If the film had been told from her perspective, instead of focusing on the Talbots, her story would have been absolutely engaging. Instead, the main story basically falls apart whenever she is off screen. The only times it ever finds any energy otherwise is when Inspector Francis Aberline (then man assigned to investigate the death of the younger Talbot) arrives on the scene, and that's because he's played by Hugo Weaving. Weaving is a phenomenal actor who could have absolutely killed it as either of the Talbots and, really, should have been given the lead performance in this movie. Instead he's a C-part character absolutely wasting this brilliant actor.

The funny thing is that both Blunt and Weaving clearly signed on for one kind of movie, a tense and tight thriller in the vein of what Universal used to make, just with modern sensibilities. But the movie whiplashes back and forth between the period drama they were making and a gory monster fest with enough tearing, rending, and blood spatter to put a George Romero film to shame. I like gore, for sure, but the film has to properly build to it. Instead it just careens back and forth from the tedious family drama (that really goes nowhere) to out-of-nowhere sprays of blood before going back to boring us with the story of the Talbots. If they film wanted to be a gore-fest, that's fine, but it has to have fun with it and there's nothing about the Talbots and their interminable drama that's fun. 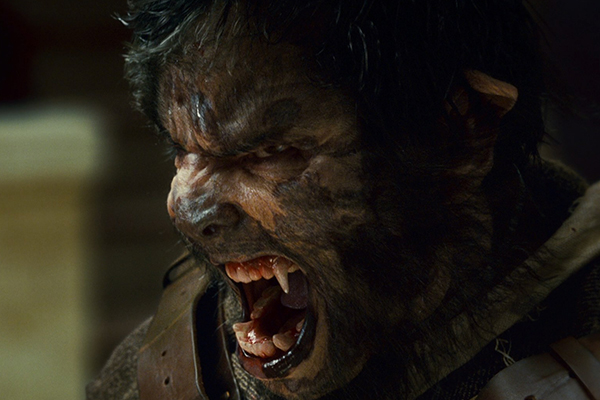 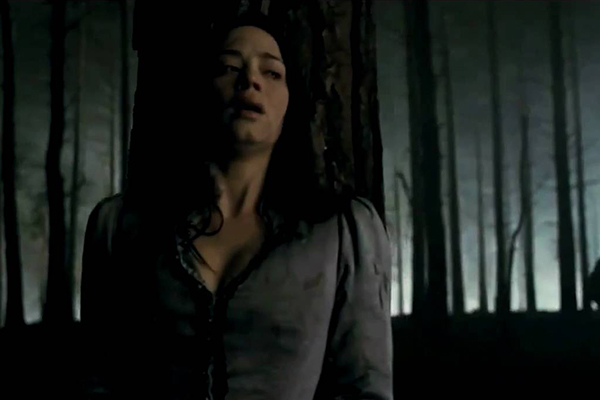 It's really hard to know what the goal was with this film. If it wanted to be a staid family drama it needed to cast actors worthy of that story. It needed to get people that could tear into the drama and really chew the scenery (no werewolf puns intended). Or, if it wanted to be an all out, bathe-in-the-blood shocker it needed to commit to it and go all in on the werewolf action, keeping the beast breathing down our necks the whole time (and now the pun is intended). But The Wolfman never commits to either side of it, losing its pace in a mess of bad lead actors, terrible plotting, and pointless gore.

It's not often that I look back at the classic Universal films, which are general slow and placid considering the Hays Code and the limitations they had to work with, and think they're better than any of their successors. But the 1943 The Wolf Man is a great movie powered by a strong central performance. If only this 2010 remake could have had that, or any small ounce of the style or smarts of the original film. While the original will remain a classic of the genre, this 2010 has been rightly forgotten, a reboots before Universal really tried to get into reboots, and a marked failure that acted like a canary in the coal mine for the failures to come.