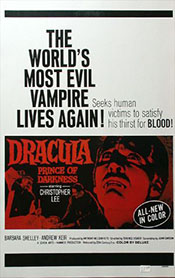 After the death of Dracula (shown as a flashback, using footage from the first Hammer Dracula at the start of the movie), the countryside around Dracula's castle (including the town of Carlsbad) has found a relative level of peace. Sure, some may still worry that the threat of vampires was still present (and, considering the events of The Brides of Dracula and The Kiss of the Vampire, that might not have been such a bad assumption), other choose to assume the dark princes is gone and the land will never be plagued by Dracula and his dark deeds again.

That's the setting out fateful heroes, the Kents, fall into when traveling across Germany. Dropped by their coachman (who won't travel through Carlsbad at night) around the lands of Dracula, the Kents are brought to Dracula's castle to rest and eat. But the foul vampire's servants has other plans, and with the blood of one of the Kents he might just be able to revive his dark master and plunge the land back into evil...

When it came to vampire movies, it really did seem like Hammer had a formula -- heroes arrive in an out of the way part of Germany, aren't able to travel further, somehow get invited to a castle, and then inadvertently fall for the machinations of an evil vampire. Even with the first of their Dracula films they established it, when Johnathan Harker first arrived on the scene at Dracula's castle. Each subsequent movie has tweaked the formula a little, but by this, the third Dracula film (and fourth vampire one) from Hammer, the formula starts to wear thin fast.

Not that there's much plot for the movie to work with beyond that initial outline. After Dracula comes back, there's just another few scenes of the remaining heroes trying to figure out how to kill the vampire. There's some talking, a chase sequence, and then Dracula dies (only to be brought back, again, sometime down the road we're all sure). There's no tension -- Dracula isn't much of a menace, and the Kents are easily able to fend him off despite him being taller, stronger, and potentially more powerful. We don't expect the Kents to die, since Dracula doesn't have much menace to him, nor do we cheer when Dracula dies since, having brought him back, Hammer removes the zing of his death. Like with many slasher villains, once you introduce that your villain can come back, you raise the question of "what's the point in killing him at all, then?" 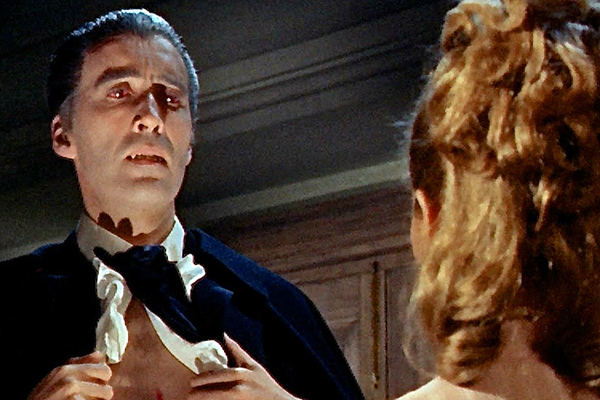 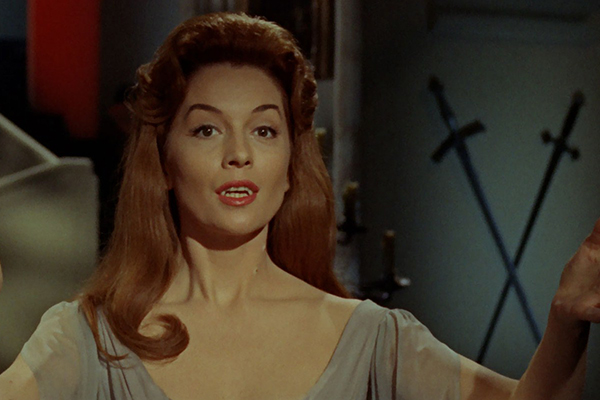 Without a good story, or any scares, a horror movie doesn't have much purpose, and that's a big reason why Dracula: Prince of Darkness doesn't work, not that it's the only reason. Despite having a wealth of characters (four Kents, two different human servants for Dracula, a priest, and the titular vampire himself), we barely get to know any of them. Only one of the Kents, Helen (Barbara Shelley) makes much of an impact, and she comes across as a scared and controlling shrew. The rest of the Kents are perfunctory, simply moving the action along. The villains do fare better. The main servant, Klove, is played by Philip Latham, and he actually has a dark and menacing presence that carries well on the screen. He actually outshines Christopher Lee (as Dracula, of course), who does a commendable job with his own character even if that only amounted to hissing like a cat at times and being tall.

Of course, as the story (from the actor himself) has it, Christopher Lee purposefully didn't have any lines to say since he hated the script and refused to speak any of his lines. Maybe that story is true (the writer for the film, Jimmy Sangster, stated otherwise in his memoir), but if it is it didn't do Lee any favors -- Dracula is a there and gone presence that leaves little impression when not on screen.

And, really, that's the problem with the whole movie. The film, like Dracula within it, doesn't make much of an impression on the viewers. It's light entertainment without much to say or scares to give, there and gone for the viewer and forgotten just as quickly. For those looking to watch good Dracula movies, this film can be skipped entirely. Dracula comes back, you know the rest. Now, maybe go watch something else instead.