Taste the Blood of Dracula 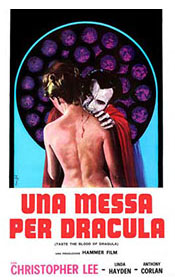 Dracula is dead. Again. As we watch from the eyes of an onlooker (Roy Kinnear as Weller) Dracula was impaled on a giant gold cross at the end of the last flick, Dracula Has Risen from the Grave, and Weller just happens to be there, in the mountains near Dracula's castle, the see his death happen (never mind that its established in the previous flick that the path to Dracula's castle is a winding maze of rocky sections, so a businessman would be unlikely to just wander in there so blithely). Seeing Dracula reduced to ash and dust, the businessman does the only obvious thing and collects all of Dracula stuff -- his cape, his bracelet (which, classy, says "Dracula" on it), and all his ash and dust. Because why wouldn't you?

Cut to some time later and three gentlemen, Hargood (Geoffrey Keen), Paxton (Peter Sallis), and Secker (John Carson) are carousing around town when the have an encounter with Lord Courtley (Ralph Bates). The lord informs them that he knows of some pretty dark, interesting magics they can do and, apparently not having had a weird enough night already, they all agree to follow him down this black magic path. So the lord takes them to Weller and, at the businessman's shop, the men by Dracula's stuff.

Soon after, in an old crypt, the gathered gentlemen perform a ritual over Dracula's ash and dust, creating a mixture of the dark lord's blood. Only Lord Courtley is willing to drink from it, and when he has a nasty reaction to the concoction, the gentlemen beat him to death (obviously the thing to do). What they couldn't have known (having never seen a Dracula movie before) was that Courtley had become a vessel for Dracula. The vampire lord then swears revenge on the perpetrators of his resurrection (because they killed his servant, Courtley, which lead to his resurrection... which doesn't make much sense, but okay), and he'll use the children of the gentlemen to exact his revenge.

The weird thing about Taste the Blood of Dracula is that aside from a number of logic holes the film is actually really watchable. Sure, not everything the characters do, including Dracula near the end of the movie, make a whole lot of sense sometimes, but the movie moves at such a solid clip and the story is different enough from previous Dracula films that it's easy to forgive many of the plot issues. 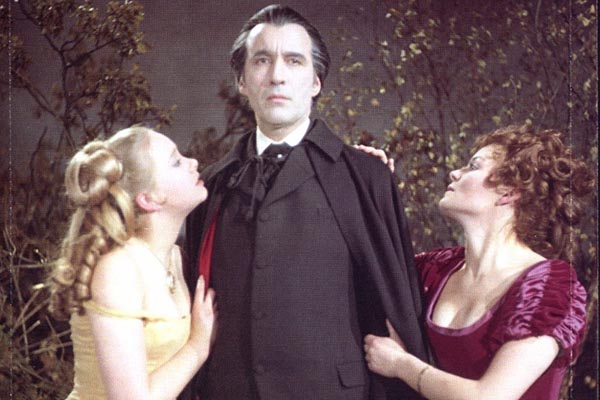 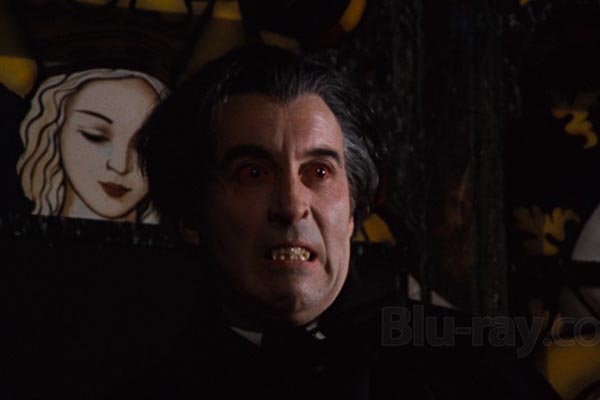 The whole angle of drinking Dracula's blood to, presumably, give all the men eternal life was interesting. Dracula was dead, so why not use his corpse and ash and blood for their own benefit? No one else thought to do that before, and it makes a certain amount of sense, which this reviewer really liked.

Not everything about the movie works, though, and the biggest issue is the ending, really. If you can accept that Dracula would exact revenge for his "fallen servant" and that he'd do it through the children of the gentlemen, the big question is why he doesn't convert each and every one of them to vampires. The first girl, Alice (the heroine of the story, as much as there is one, really) is made into his servant but he doesn't vamp her. Instead he goes after her friend and daughter of Paxton, Lucy (Isla Blair). Alice actually outlives Lucy, and she's never converted, despite Dracula plainly being in the mood the make other vampires and having plenty of opportunities to do so -- Dracula should have vamped her, and the only reason he didn't is because the storytellers obviously wanted Alice to survive the movie so they could have a happy ending. It's dumb and doesn't make any internal sense.

Then there's the very end of the movie, which has one of the dumber Dracula deaths and is dependent of Dracula being dumb, acting out of character, and allowing himself to basically be killed. Again, it's a leap of logic that was just a step too far for this reviewer and hurt the over-all movie.

Still, the narrative twists and turns were pretty good. Couple that with pretty good performances, with Christopher Lee being the standout (as always), and you actually end up with one of the better Hammer Dracula flicks. It's not a knockout by any means, but this is certainly a Dracula that newbies as well as film experts could watch and appreciate. Well worth at least one watch.