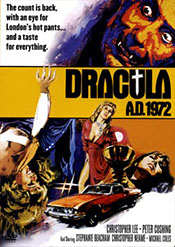 The time was 1872 and the countryside was darkened by the evil of Dracula (not to be confused with The Evil of Frankenstein -- the two are unrelated). Thankfully, one man stood against Dracula and his dark forces: Lawrence Van Helsing. The vampire hunter staked the vampire after a fraught fist fight on a stagecoach. The two died together, each from their injuries, and the world was made safe... for a time.

After 100 years, though, there are those that wanted to raise the vampire lord and use his power to gain everlasting life as his servants. One of these men, Johnny Alucard, got with his friends to "have a bit of a laugh" and maybe raise a little hell. Of course, he meant that literally, and with their unwitting help was able to bring the dark lord back to life. Now the count is seeking revenge against the one who put him in the grave, and he'll go through their descendant, Jessica Van Helsing, to do it by making the young girl into his unholy bride. Only Lorrimer Van Helsing, her grandfather, have the knowledge and skills to stop Dracula before it's too late...

Dracula A.D. 1972 marks a bit of a "soft-boot" for the Hammer Dracula series. Although the film features Christopher Lee as Dracula and Peter Cushing as Van Helsing, the movie does not feature shared continuity with the previous movies that came before -- Cushing is Lawrence Van Helsing in the flash back scenes, not the original Abraham. The timeline also doesn't sync up, if you know your Hammer movies -- the events of Dracula took place in 1880, marking the first time Dracula encountered Abraham, but Dracula A.D. 1972 features a scene back in 1872, 8 years before. Why they decided to reboot instead of continue the series in unclear as Van Helsing survived his previous encounters with vampires, and Dracula could always come back. Whatever the case, it's an odd note that most might not detect.

That strangeness of story and setting aside, Dracula A.D. 1972 is still very much a Hammer Dracula film. If anything, it's actually a tighter film than many of the Dracula movies to come before. In part this can be explained by the film borrowing liberally from the fifth Hammer Dracula movie, Taste the Blood of Dracula -- both film feature Dracula being resurrected by a black ritual involving fresh blood and his ash and dust, with these actions taken by his loyal servants, and then a need for revenge by those who previously wronged the vampire. The similarities, in fact, are rather striking if you watch both films back to back (like we did), but thankfully the two films are different enough that A.D. 1972 can be judged on its own merits. 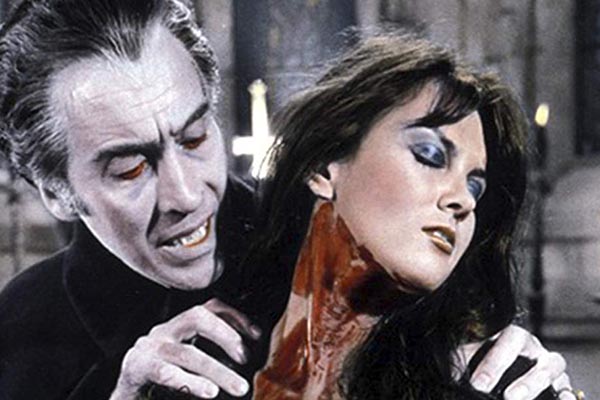 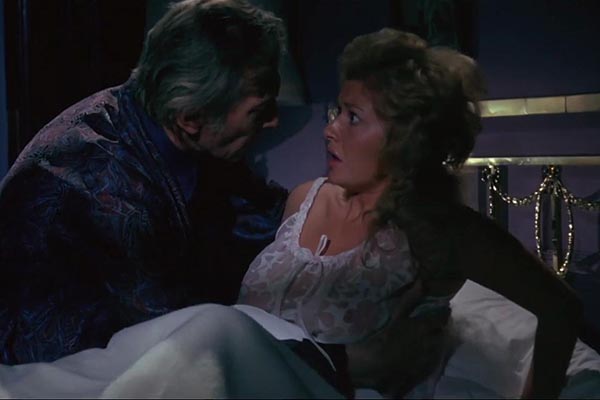 Thankfully, the later film does stand up on its own. Much of this is probably due to the three leads in Dracula A.D. 1972 -- Christopher Lee, Peter Cushing, and Stephanie Beacham. Of course, as we've raved before on this site, Christopher Lee and Peter Cushing are each joys to watch whenever they are on screen. Both men of great film presences, and any film that features both actors is elevated by their inclusion. What was surprising was that Stephanie Beacham was able to carry her scenes even when the two male leads weren't around. As the younger Van Helsing, Beacham had to make viewers care about her character, about the fact that Dracula was coming for her (something other actresses in these movies have failed to do -- so often they are simply personality-less damsels). Beacham, though, proved engaging, and you actually cared if she lived or died, which aided the movie to no end.

Sadly, other parts of the movie did not hold up nearly as well, primarily because none of the leads were in some select scenes. The most egregious is right at the beginning during an extended party scene. This scene is meant to introduce us to the main cast of characters, a bunch of hippy partiers. However, between the tropes of the era it was put out (the 1970s) and two extended musical numbers (which so often seemed to be included in movies of this era for no reason) the intro drags and you wind up not caring about any of the characters introduced (and the band, which is given so much screen time here, is never seen again).

Then, of course, there is the ending, something Hammer frequently struggled with in their monster movies. Eventually the formula always got the better of their pictures, and no matter how good one of their films was going, it always had to end with a confrontation between the (male) hero and the monster, one looking to rescue the damsel (always female), and then Dracula dies rather pathetically. For a monster that is so powerful, the so many people give their lives to resurrect and serve, he so often died like a bitch. The fact that, in the process, they make the younger Van Helsing into a damsel when, up to this point, she showed a certain amount of agency in her actions, is particularly sad.

In the end, Dracula A.D. 1972 gets a lot right while still showing the wear and tear on Hammer's Dracula formula. If you can get past how very "70s" the movie is, there's a lot to like in the film. It might not be the best Dracula movie, but for Hammer it still does pretty well.